I Love When My Kids Get Along 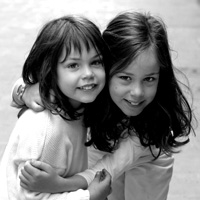 A strange and amazing thing happened on our recent vacation to California. Our girls got along.

These are the times that try moms’ souls.

Just about every time we get in the car, me in the front, the girls in their booster seats in back, I think of that great American philosopher, Bill Cosby, who said that you’re not a real parent if you only have one child. Why? Because if you have only one you don’t hear, "Mom, she’s touching me! Make her stop touching me!" all…day…long.

I am a parent, according to Mr. Cosby.

In the back seat my girls fight over everything from the way they close the door, how quickly they click into their seatbelts and the discovery of a toy neither of them wanted before but now both MUST possess immediately. Last week they argued endlessly over whether Suzi’s friend really knew how to do long division. Sigh. But the single most common, shrill exclamation I hear is, "Mom, she keeps touching me!!!"

Now while all this is going on, I gently ask them to stop, eventually getting louder and louder myself – adding to the eardrum-shattering decibel level in my midsized car. Finally I settle into gnashing my teeth and cranking up the radio as loud as possible.

So imagine my surprise when the girls were perfect angels in the rental van we had on our recent vacation. At first they sat in the second row of seats, amusing themselves with word games and plays while my husband Bill and I enjoyed the rare opportunity to have long conversations (interrupted only by his swerving and braking – attempts to keep us alive in the horrific Los Angeles freeway traffic).

Soon the girls moved their booster seats back to the third row. While I couldn’t hear what they were saying, there were unmistakable sounds of silly voices and giggling. How could this be? While I enjoyed some much longed-for adult conversations with Bill and other family members, I wondered over the mystery of those two spending hours of road time together. Happily! Laughing!? Now they were finally having a good time in the car – and I couldn’t hear what they were doing.

Didn’t matter though. What a pleasant relief to experience them actually enjoying each other. I could hardly believe it, but it made me a happy mom.

Patti and Suzi were both adorable throughout the trip. They enjoyed everything from the amusement park to the interpretive museum. They even slept in the same bed and didn’t come to blows. Other adults noticed how charming they were, too. And we got credit for it – what good parents we must be, relatives concluded. There’s a bonus for you!

I couldn’t help but wonder how long it would last.

The answer came soon enough. After we landed back home, they started to fight over leftover airline snacks. By the time they were belted, once again, into our messy backseat, the full-fledged battles commenced.

Now we’re back home, back to school and back to the normal backseat behavior. But as I gnash my increasingly stubby teeth and blast the car radio, at least I know … we’ll always have L.A.