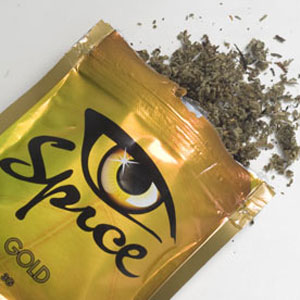 Communities across southeast Michigan have taken a stand against the use of synthetic marijuana this week by banning the sale of it – and Michigan legislators aren't far behind in doing the same.

The synthetic drug is currently still legal despite sporadic banishment in various Michigan counties and at least 40 states, according to the National Conference of State Legislatures, making it easy to obtain and use – even for children, to the great concern of local parents and advocates.

So what is synthetic marijuana? How harmful is it? And where do local governments and the state legislature currently stand on its sale?

What is synthetic marijuana?

Synthetic marijuana – also known as K2 or Spice – is "a mixture of herbs and spices that is typically sprayed with a synthetic compound chemically similar to THC, the psychoactive ingredients in marijuana," according to the U.S. Drug Enforcement Administration, or DEA.

This synthetic mixture is meant to have the same effects on the body as real marijuana, the DEA says, and it is usually smoked or consumed.

According to a June 5 Detroit News article, synthetic marijuana can also cause confusion and hallucinations, but more seriously seizures and stroke.

What's concerning about synthetic marijuana is how easy it is to obtain, sparking concern among more than a few parents. The DEA says the legal synthetic drug can be found at gas stations, tobacco shops, convenience stores and over the Internet.

It's unknown exactly where synthetic marijuana comes from, the DEA adds, or who manufactures it.

Although it's not a "real" drug, synthetic marijuana brings a slew of health risks to the table.

According to the American Association of Poison Control Centers, poison centers have received more than 11,000 calls regarding synthetic marijuana since 2010, with just over 8,000 of them occurring during the last year.

On June 6, The Detroit News reported that synthetic marijuana abuse "has put 183 people – including 91 teenagers – in Michigan hospitals this year."

In metro Detroit, it's led to at least two homicides and one death, The Detroit News noted.

Southeast Michigan communities have noticed the harmful effects of the synthetic drug.

Oakland County began an initiative to stop stores from selling the synthetic drug June 1, according to The Detroit News.

On June 4, Macomb County Executive Mark Hackel – along with Steven Gold, the county's heath officer – signed an emergency order banning the sale of synthetic marijuana, dubbing it an "imminent danger to health or lives."

The Detroit News reported that the West Bloomfield Township Board of Trustees signed an emergency order June 4, becoming the first Oakland County town to set a ban.

One day later, Detroit Mayor Dave Bing followed suit, banning the substance's sale in the city, also according to the News.

"To anyone distributing K2 or other synthetic marijuana in the City of Detroit to the detriment of our citizens, we have a message for you – we will seize it and we will prosecute you to the fullest extent of the law," Bing said in a statement, according to The News.

According to the News, the Wayne County Department of Public Health was next to join the list by signing a similar order and opening a 24-hour hotline for reporting synthetic marijuana retailers.

Each county has set its own fines and punishments for the sale of synthetic marijuana.

Where the state stands currently

State legislators are also working to enact a statewide ban.

On June 7, Senate Bill 1082, which would ban the sale of synthetic drugs, passed the Michigan House of Representatives with a unanimous 107-0 vote and was returned to the state Senate.

According to a June 7 AnnArbor.com article, after the state Senate approves the minor changes the Michigan House made, it will go on to Gov. Rick Snyder.