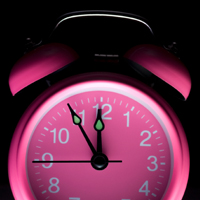 From the very start, my oldest daughter Patti was NOT a sleeper. And we tried everything.

Remember when the "Dr. Ferber Method" of letting babies cry themselves to sleep was all the rage back in the late 1990s? I can still visualize the promo for an episode of Mad About You in which the two main characters sit outside their child’s door in absolute, body-twisting anguish, listening to their daughter cry.

I didn’t have kids then and I thought that was the most terrible thing in the world!

But that was before I had a child who wouldn’t sleep.

When we adopted Patti in 2002, she was 9 months old – and already well-established in her non-sleeping ways.

I remember sitting with her in a rocking chair, quiet lullabies humming on the CD player, rocking her ever so gently … for hours. When it seemed like she hadn’t moved in a quarter hour, I would take a peek at her face. And yup: She was smiling. Looking around. NOT SLEEPING!

I sang to her. I talked to her. I rocked and bathed and cooed at her. Nothing worked.

And then people tried to sell me on Dr. Ferber’s method. But apparently it wasn’t designed for a kid weighing all of 22 pounds who could scream for an hour and a half, no problem. Sometimes I fell asleep with her screaming right into my face. Someone ELSE would wake me up, like an appalled mother-in-law, for instance, demanding I tend to the poor little dear.

The only thing that really worked was taking the little bundle to bed with me. Wrong, cruel or preposterous to all the busybodies out there, I didn’t really care. That’s what I had to do to survive.

Things haven’t changed much in nine years. Little Patti is now 10-year-old Patti. But now, it’s more a matter of when rather than where. Sure, she’s willing to sleep in her own bed. But what time does this fourth grader wish to put her wee head upon her fluffy pillow? Oh, about half-past midnight. That is if I’d let her.

My husband was amused by this when Patti was a toddler. "She doesn’t want to miss a moment of life!" he would proclaim proudly when she was 2. Now, he grumpily demands she go to bed when he catches her still wandering about at 9:30 p.m. That makes her weepy and defensive, which gives her an excuse to stay up and be comforted by me until 10.

Oh yes. She is good.

Our bedtime tango begins at about 8:30 each night. She will come up with a myriad of stalling techniques that still confound me. I’ll be in bed at 10 and she’ll come sauntering around the corner, waking me up to ask if I’m asleep.

I almost completely lost it last night when she suddenly had a spelling test to study for … at 10:15. That has become a favorite technique, lately – pull out something that I really care about late at night to buy another half-hour of awake time, even if that means it’s spent studying.

She is a very desperate insomniac.

But last night, I didn’t fall for it. I made my little perfectionist go to sleep without studying, hoping that if she does poorly on her spelling test it might turn all this behavior around. Yes, indeed, I may be on the verge of a new discovery that will solve our problems once and for all.

So maybe I should just have Patti tuck me into bed every night and go off on her merry way.