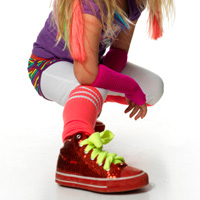 OK, so now I’m officially a working mom and our girls are in daycare. It’s a big adjustment for all of us, but we survived Week 1. Because I start work earlier than my husband Bill, he drives them to daycare and I pick them up. One problem with this arrangement is that Bill is helping the girls get dressed.

This has always been a problem because my husband is apparently both colorblind and fashion-challenged. On the rare occasion Daddy was in charge when they were small, Bill would dress them in clashing colors and clothes that were inappropriate for the weather, like sandals and short sleeves on a cold day.

You just can’t get good help these days.

But once they got older and had some control over their own wardrobe, things got a little better. Until my first week at work, that is. It was the hottest week of the summer and each day I arrived to pick them up, Suzi was wearing something stranger than the last.

When the temperature was 95 outside, she was wearing long, heavy jeans. "Aren’t you hot?" I asked when I saw her. "Nope," she said, "I didn’t sweat at all, Mommy."

What did Dad have to say? "That’s what she picked out," he explained with a shrug.

The next day I laid out a summer outfit. She ignored it. It was 97 outside and Suzi wore a purple, long-sleeved shirt and brown leggings. Didn’t look so good. Looked hot, too. "I like it, Mom," she said argumentatively when I questioned her. Dad shrugged again. "She likes it."

The next day it was 99 degrees and Suzi, was resplendent in a long-sleeved brown shirt, black leggings covered in colorful stars and an aqua-colored skort pulled on OVER the leggings.

"This looks good, Mom!" she cried angrily in response to my horrified look, her arms folded over her chest. Her sister was mortified. I was, too. Dad shrugged.

The situation begs the question: Do her clothing choices matter if she’s happy with the way she looks?

The truth is this is not an easy transition for our girls. Since they joined the summer program a month after the other kids, they are still struggling to make friends there. The cliques have already formed without them. Patti didn’t much care whether the girlie girls wanted her to play Barbies with them. She was content with a Wii and crafts and befriending some boys.

However, Suzi was dying to get into the cluster of five girls playing with Barbies (her favorite pastime). But as girls sometimes do, they shut her out. They didn’t want her and they told her so. It was a rough week, and I can’t help but think that her unusual attire didn’t help her out much.

So I toyed with sharing the idea that sometimes little things like weird fashion statements can hurt your social life. Yet that doesn’t seem right. Why give in to the mean girls? And maybe the clothes aren’t the issue. Suzi also likes to burst into song without warning, insists on being the Rule Maker for all games and can get very little sullen when she doesn’t get her way. We have a few things to work on.

It’s hard to argue with a little girl who takes such great pride in making wacky clothing choices, even if it may be backfiring.

For now, I’ve decided to lay out cute, matching shorts and tops everyday and hope she takes the hint. And if she doesn’t, who knows. Maybe the other girls will start dressing like her.

I guess I should just be content that it’s not tattoos and piercings we’re arguing about.