Moms Are Breadwinners in Many Homes, Researchers Find 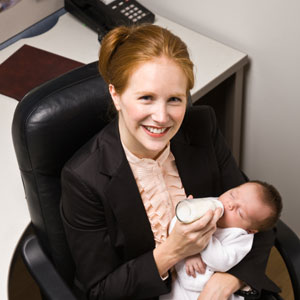 Moms are bringin’ home the bacon! In nearly 40 percent of households, moms of children under 18 have become the sole or primary “breadwinners” in their households, a recent report from the Pew Research Center’s Social & Demographic Trends says.

But Pew’s research also suggests that moms earning big isn’t exactly what society wants to see. A look at the statistics reveals more.

When Pew Research Center examined data from the U.S. Census Bureau, it found that “breadwinner moms” consist of married women who make more money than their husbands – and also single mothers.

According to a 2010 Time Magazine article, it makes perfect sense that women would want to fill the position of breadwinner within their family unit. Even three years ago, there was a predicted stellar outlook for the future of women in the American workforce.

More modern moms are working full-time for the money, but they say working part-time is ideal. Read about it in another In The News blog.

“As the U.S. continues its migration from a manufacturing economy to a knowledge-based one, women are poised to snag more jobs,” the article notes. “They make up the majority of the workforce in 9 of the 10 occupations the (Bureau of Labor Statistics) predicts will add the most jobs in the next eight years.”

With the odds in their favor, why wouldn’t moms want to increase their economic status? For starters, Americans have strong opinions on mothers who choose to switch up traditional roles and leave fathers in charge of the household, Pew’s research concluded.

Americans recognize there is a economic benefit to having mom go to work, researchers found – yet a whopping 74 percent surveyed said they thought mom’s job made parenting more difficult, and about 50 percent said it has made marriages more challenging.

According to the research, 51 percent of those surveyed said children are “better off” if a mother is home and doesn’t hold a job, while just 8 percent say the kids would do well if pops stayed home.

Yen Azzaro, mother of one from Ann Arbor, says that by thinking moms are the only ones capable of parenting is “a travesty to what parenthood means.” Azzaro says that, while she was recovering from birth, her husband did everything. “And I mean everything,” she adds.

“(It) narrows the roles that our kids think that they can accomplish in the future,” Azzaro says of designating parenting to one gender. “Men and women should be able to do just about any and all tasks when it comes to kids.”

Jenine Sparks Carey, a mother of two from Metamora, Mich., says she shares responsibilities with her husband Chris – but there was a time when she was the sole breadwinner in her family.

“Interesting statistics,” Sparks Carey remarks. “I often wished I had more time with the kids when they were ages 0 to 5 – and even now limit my work hours to balance time with my kids/their needs. I do not believe I could be happy as a ‘traditional’ housewife, but know others that are well suited for (and) perfectly happy with that role.”

Of course, some women don’t have a choice and have to get a job. The study also reveals that 63 percent of “breadwinner moms” are single mothers.

Highland Park mom Angela Thomas, currently a stay-at-home mom of three, says she wonders “why we continue to have this conversation about what women choose to do.” Thomas worked fulltime before motherhood.

“I have always said that it’s an individual choice and we should support whatever decision a mom makes for herself and her family,” Thomas says. “There is no right answer.”