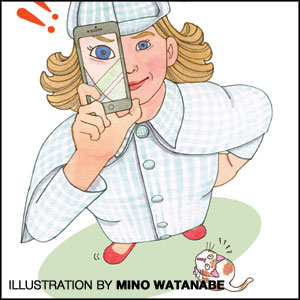 Ten seconds. That's how long a boy can view your daughter's nude photo on the smartphone app Snapchat before it self-destructs. She controlled how long the picture was viewable – and who viewed it. But, in those 10 seconds, that boy can take a screen shot and send the photo to 10 of his closest buddies. That, unfortunately, your daughter cannot control.

This kind of poor choice has detrimental consequences to any child's reputation.

With applications like Snapchat for phones – and social media sites like Facebook – more and more kids are making bad decisions online. And a growing number of concerned parents are joining these sites to keep tabs on their kids' behavior, according to a new study from the Pew Research Center's Internet & American Life Project.

The number of parents with kids ages 12-17 creating such accounts jumped from 58 percent in 2011 to 66 percent in 2012. More than 40 percent of the parents interviewed about specific categories said they were "very concerned" about all of them – including strangers, advertiser practices, reputation management, and academic and professional opportunities – when it comes to their child.

And they should be.

Kids spend some 60 hours each week online, and "their online reputation is more important than their real-life reputation," says Keith Dunn, cyber safety professional speaker, author and expert on web safety, and founder of the KDCOP Foundation in New Jersey.

This is something that your daughter may not be thinking when she posts a provocative photo of herself – or your son might not ponder when he brags about how drunk he was on Friday night.

But the consequences of poor judgment on social media sites are very real.

"Colleges and universities are really using social networks as a way to stop kids from getting into colleges," Dunn says.

So, as parents join their kids online, here are some things they can do to keep tabs on their kids – and prevent missteps.

You're friends. Now what?

Becoming Facebook friends with your kids will definitely keep the lines of communication open and help you keep a closer eye on your kid.

For Sherri Frost from Garden City, being friends with her son, Kyle, age 16, on Facebook was a must when he joined in 2009.

"He wouldn't have an account if I didn't," she says.

In addition, Frost assisted her son in setting up his privacy settings on his Facebook page to keep strangers from seeing valuable information. Frost admits she has gone on Kyle's Facebook page "not to delete anything," she says, "but to read messages – just like I would on his cell phone."

Aside from having your child's password, Dunn suggests other ways parents can monitor their kids' activities on social media sites.

"You need to go and look at your daughter's friends – and then look at their friends. Spend a few hours and look through photos."

Dunn points out that while cyber bullying and sexting have been pushed in the spotlight, he believes "it's important to remember that the sexual predator factor is online, as well."

Predators use Facebook and Instagram to access kids – and, since children tend to put every detail of their lives online, it's easy for a predator to know exactly where your kid is at most times of the day.

"Parents need to Google their kids," Dunn adds. "Google different versions of it. If her name is Samantha, Google 'Sam.'"

And even after you've done these basics, Dunn suggests parents purchase a monitoring program. He recommends one called eBlaster.

"It records everything your child does online and sends you reports once a week or once a month," Dunn says.

And learning acceptable online behavior is imperative, because, as Dunn says, "(Kids) are now celebrities – and the world is the paparazzi."