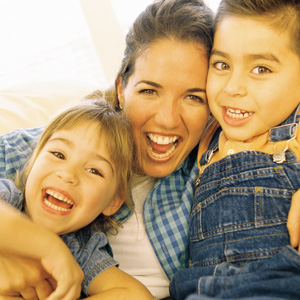 If you ask any parent, they'll tell you: Parenting it the most difficult job in the world. Responsibilities like teacher, chef, maid and therapist all fall under the "mom" (and, more than ever, "dad") job description. And for years, there have been reports that it can all make us miserable.

But in a recent series of studies of U.S. and Canadian parents – which soon will be published in the journal of the Association for Psychological Science – researchers Chris M. Herbst and John Ifcher found parents are actually happier people than non-parents, contrary to popular belief. And, to boot, parents are becoming happier over time in comparison to their counterparts.

What's going on? Well, in particular, researchers said parents seem to have greater level of "meaning" in their lives. They also seem happier "during the day when they are caring for their children," versus other daily activities. It's all in keeping, they add, with "emerging evolutionary perspectives that suggest parenting is a fundamental human need."

That's definitely a different tune than we've been hearing over the past few years.

Articles in The New York Times, New York Magazine and dozens of other publications and websites in past years have trumpeted the astounding number of studies being released claiming parenthood makes people unhappy. An issue of New York Magazine in July of 2010 the cover summed it up, in big white letters: "I Love My Children. I Hate My Life."

In April 2009, the New York Times' Motherlode blog also reported on parents being less happy than non-parents. For years, this has been believed to be, more or less, true.

Till this study. In it, researchers conducted tests to determine whether parents overall were happier than those without children. It found this to be true – particularly with fathers. Researchers attribute that to the gender divide, saying it "is not unexpected, as the pleasures associated with parenting may be offset by the surge in responsibility and housework that arrives with motherhood." Bottom line: Dads still do less of the grunt work of parenting. Consequently, their parenting experience is proportionately more satisfying since they experience less of the negatives of child-rearing. Older married people are more likely to be happier if they have children than if they didn't. Single parents and young parents tend to be less happy than their counterparts without children.

In a press release, Dunn summed it up this way: "These findings suggest that parents are not nearly the miserable creatures that we might expect from recent studies and popular representations." There is hope, after all.