Preparing Your Family for Severe Weather in Southeast Michigan 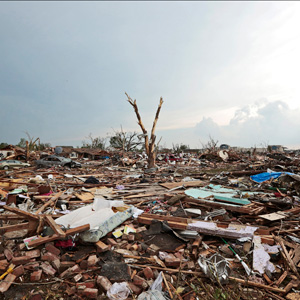 On May 20, a 1.3-mile-wide tornado tore through Moore, Okla. near Oklahoma City, destroying everything in its 17-mile path. So far, 24 people died, including two infants and 10 children, according to the Washington Post. The tornado was an EF5 – "the most powerful category of tornadoes," CNN reports.

As the country watches Oklahoma pick up the pieces and mourn its losses, we're reminded of how devastating and destructive severe weather can be. Here in southeast Michigan, we've had our fair share of damaging winds and rain – and even the occasional tornado. In fact, our region is currently in the beginning of a stretch of time that's more prone to bad weather.

Make sure your family is prepared for any harsh Michigan storms this spring and summer. Here's how.

Families should prepare for severe weather by putting together a kit full of essential items, Locke says. "You could lose your electric power" or "a tree could be tipped over and rip up your water lines," he explains. Therefore, your kit should include:

"Keep all of this put together in some type of container that can be sealed," Locke says. That way, if your home is damaged or destroyed, vital information, such as your homeowner insurance company's phone number, can be found easily.

What to do before and during

Once the sirens are going off, don't go outside. "Trust us," Locke advises. Then, seek shelter and "ride it out."

If indoors, Locke advises heading to a basement – but "it's not enough to be in a basement," he says. "You still need to get against the wall and try to get under a very heavy table," or even under cast cement sinks or stairs, to protect yourself from falling debris.

Not in a building with a basement? Find "the most interior room in that building," Locke says, whether it's a closet or an interior hallway. Make sure it doesn't have glass or windows to the outside.

Locke says if driving, we're often advised to pull off to the side of the road and lie in a low ditch. But even then, "It's really not a safe area to be." He suggests finding a school or retail building nearby.

Throughout the storm, "Keep a radio available with you so you can follow the storm" and know when the National Weather Services gives the all-clear, Locke says.

Practice and talk to your kids about safety practices and safe areas in your area, even if there's not an immediate chance of severe weather. The way Locke sees it, "Most the time, you're at home" – especially when these storms hit –which is usually around 4-6 p.m.

Be very careful after the storm if there has been a lot of destruction or there is a lot of debris around.

"Assess the damage," Locke says. "If it looks too dangerous to go in, don't go in."

Also, "Be aware of your surroundings." There are often downed power lines that can fall onto a metal fence, electrifying the entire fence in your backyard, he says as an example.

Families should also have a communication plan in place. "One of the biggest things for people is (they're) worried about their relatives who have been involved in these disasters." To avoid panicking, work out a system of people you'll call to let them know you're OK (and who can alert others, too).