Teen Sexting Can Be Linked To Other Risky Sexual Behaviors 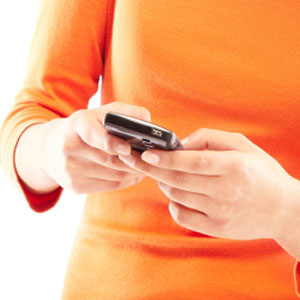 An image cannot transmit disease or cause pregnancy. Neither can some naughty words.

However, the implications of a new study suggest that teens sending explicit messages and photos of themselves via cell phones are more likely to engage in "real world" sexual behavior – unsafe or otherwise.

The study, published in Pediatrics, found teens ages 12 to 18 who send or receive sexual texts are seven times more likely to be sexually active than those who claimed to have never "sexted."

Though the study notes only 15 percent of adolescents with cell phone access admitted to sexting, the number is still alarming – considering well over 75 percent of teens now have their own phones, according to a Pew Research Center survey from April.

While the study itself cannot prove that sexting causes real life sexual activity, this correlation between virtual and physical sex posits a new perspective on talking to adolescents about sexual behavior and risk.

Pew reports the average volume of text messages sent and received by teens had increased to nearly 60 per day since 2009 – a 20 percent jump. With so many messages sent every day and all day, a few are bound to get a little lewd.

The Pew study from March found sexting occurs most often in three scenarios:

Most commonly, the teens – both boys and girls – who have sent racy content say they did so to be "fun or flirtatious," a study conducted by The National Campaign to Prevent Teen and Unplanned Pregnancy and CosmoGirl.com found. Nearly half of those who sent a message or photo did so in response to one they received.

What some teens don't realize is the ramifications of these exchanges can be very serious to those involved.

In Michigan, it is a felony to possess, solicit, create or distribute sexually explicit photos of a minor. The age of either party is irrelevant, so if a 15-year-old girl sends nude pictures of herself to her 14-year-old boyfriend, both can be charged under this law.

Many school codes of conduct reflect the age of sexting, too. For example, the Oxford Community Schools Code of Conduct has an annotation to the sexual conduct section of its infractions list warning students that sexting could lead to a "lifetime inclusion on sexual offender registries."

Teens, sexting or not, are still sexually active

While it's known that some teens are sexting, it's also known that they're having "real life" sex.

Nearly 50 percent of American high school students have admitted to having intercourse at least once, with over 30 percent having had sex within the last three months, the Centers for Disease Control and Prevention reports.

Although these statistics are nothing new, about 40 percent of those sexually active teens admitting to not having used condoms, the CDC notes, which raises major concerns.

If we recognize that the sexting teens are often the ones having sex, and that a large number of the teens having sex are not being safe about it, how should parents and educators approach this multi-faceted issue effectively?

Using the findings and sexting to educate

The authors of the new sexting study conclude that this information should be used to facilitate discussion about risky sexual behavior with adolescents.

Currently, the Michigan Sexual Education Code does not explicitly dub virtual sex such as sexting, or address how to discuss this fairly recent subject with students. However, the message of risk is still communicated.

"The programs that we have are based around giving students skills and models for healthy relationships," says Pauline Pruneau, health consultant at Oakland Schools.

"Sexting is covered. Students learn how to make responsible decisions in their relationships in regards to violence and other risks … such as sexting," she says.

Based on what's known about the subject, the notion that parents and educators can completely eradicate teen sex is, many experts argue, unreasonable and impossible.

Granted, there's only so much administrators can do to stop texting (sexual or not) during school hours – and, as soon as the kids are at home, parents are left with the daunting task of monitoring their kids' communications.

While waiting for this topic to be "added to school-based health class curricula," as the authors of the study call for, talk with your kids about sexting. It could serve as an effective way to initiate a broader conversation about other risky behavior.