Why 'Play' is Important for Parents, Too 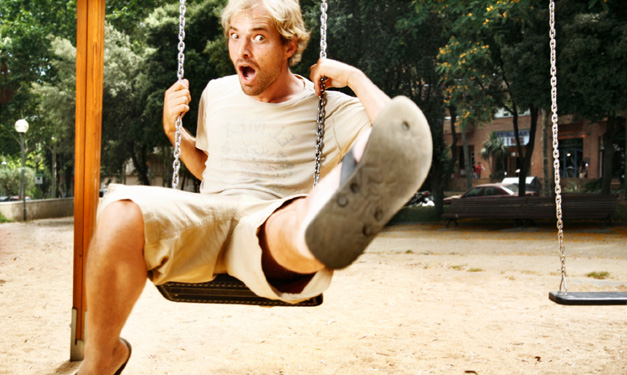 On spring and summer evenings, the Detroit Sandlot Baseball Club gathers to play a few innings. But this is no kids’ team: This pick-up league of about 20 grown-up guys – self-dubbed "mediocre ballplayers" – is all ready for fun and games. And for many, like Daniel "Curly" Paling, it’s also a break from dad duties.

"It’s back to that ‘you time," says Paling, 27, a Detroit police officer. He runs the league, and he and his wife also raise their two young kids in the city. "You can get away, hit a baseball, laugh and joke."

Throughout metro Detroit, a growing team of parents is swapping bleacher and auditorium seats for their own piece of the action. Step aside, junior: Athletically-geared, adults-only groups are giving mom and pop a chance to blow off steam, get fit, make friends and even rediscover themselves.

Take the moms who slip into leotards and flock to Christina Kammuller’s "Adult Ballet" program. In classes for virtually every skill level, they’re tapping their inner, little-girl ballerina – or learning to plie from scratch – in a graceful yet rigorous workout.

And, by sharing a ballet barre, they’re rekindling a kind of schoolgirl closeness, says Kammuller, who’s now been teaching adults exclusively for 20-plus years.

"There is something about our childhood and adolescence time that we still want to keep," she says. And, age aside, it’d be easy to mistake this Keego Harbor dance studio for your kid’s, from the heap of bags on the piano bench to the excited chattering beforehand – and well after class is over. "We’re always talking about life, period, over here," she adds. "It’s very homey."

Moms of older kids, and even grandmas, swap insight with younger mothers fretting over a phase with the kids or gripe with the spouse. "They talk about the little problems they feel they are having" – and the good stuff, too, Kammuller says.

But while her advanced pointe dancers do wear tutus, these classes aren’t fluff. Thanks to all those memorized movements and French terms, it’s also a mental workout – and a healthy distraction, says absolute-beginner Eva Meade, 38, of Bloomfield Hills.

"You can’t go making grocery lists while you’re there," explains Meade, who has a 5 1/2-year-old son. "It makes me ‘check out’ of my busy, daily life. It makes me focus completely on, ‘Here I am,’ in that moment."

Sporty fun for mom and dad

Striking a parent-personal balance has been a long-time juggle, and priority, for Rhonda and Robert Holhouser. The Northville parents get their kicks – well, bumps – on a volleyball team, through their local parks and rec department. They’ve been on the same coed team since 1990.

Earlier on, they hired babysitters. "We thought this was important, and something to do together," says Rhonda, 44, who played back in high school. Granted, their competitive streaks have waned a bit, and sports events are now piling up for their three kids, ages 10-13. But from September to May, they’re still having a blast on the court with "Safe Sets" – the name of their Wednesday-night game group.

"The fun and fellowship outside of work is worth rushing home for," says Robert, 46, a full-time financial manager. Not only is it a rare chance to build up bonds "without kids being the link;" it’s also precious time with each other.

"Above all, you’re friends," he says. "Having a common understanding, liking the same things and sharing them – I do think it has helped strengthen the marriage."

Ditto for separate sports, Paling says. Sometimes his wife, Brandie, swings by to catch a ballgame with their children Caden, 5, and 3-year-old Raelyn. Or he fills his family in on the latest antics.

"It gives you something to talk about, other than the everyday bills and who’s going to watch the kids when," he says. "It’s a dialogue you don’t have to spend money to have."

Cobbling up the time – and motivation – can be a challenge for any parent. But many groups are tailoring schedules to help swamped parents. For instance, by definition, pick-up baseball has no attendance rules. With the ballet program, classes are pay-as you go, which offers flexibility if something comes up.

"A lot of people use their kids as an excuse – that they ‘can’t do that,’ because ‘I’ve got to take care of the kids,’" Paling says. "Bring the kids along."

Bonus: It may set an example for when they’re someday parents themselves.