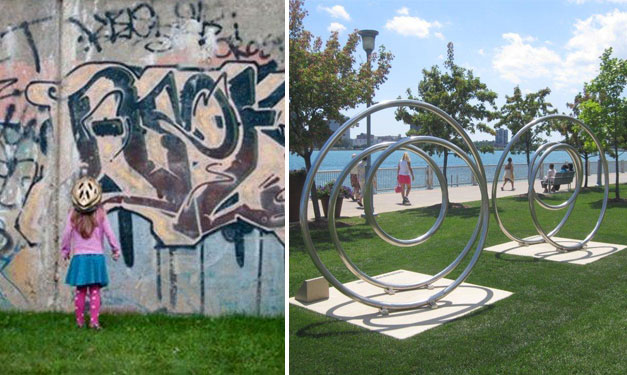 Whatever the season, the Detroit RiverFront is a prime place to connect with a big, powerful body of water – and the artistic murals and public art that have sprung up in this revitalized area.

In particular, the RiverWalk and Dequindre Cut Greenway hold plenty of outdoor eye candy for kids and parents alike, along with opportunities to learn.

Along the GM and Rivard plazas, you might be able to explore five “Garden Rooms,” each featuring a bench, a little landscaping and a sculpture; these were on loan to the Detroit RiverFront Conservancy as of 2013.

The 1.35-mile “cut,” meanwhile – a prime destination for walking, running and dog strolling that traces inland from the water – is a converted railway bed. And its concrete walls and bridges are covered with urban graffiti art, both new and old.

How can you engage children in a little bit of art learning in these places? In the RiverWalk plazas, sit together on a bench in a “room.” How do the nearby sculptures make kids feel? What are the structures made of? Why do they think public art exists? Watch freighters go by, too. What could they be hauling?

On the cut, check out the graffiti murals. Did you know many, like a space-themed image by famed artist Fel3000ft, are commissioned – and legal? See if you can also spot older, faded spray-painted images from the railroad days, too.

More about the art in the area

Displays rotate through the “rooms” and have included the likes of Tyree Guyton, the creative force behind The Heidelberg Project in Detroit, the famed outdoor art installation – and Ray Katz, a Michigan metal artist.

The cut also has gained international attention for its ornate murals – which, some after years of their original creation, are pretty pristine. “No one will touch it” or “tag” this art, conservancy spokesman Mark Pasco says.

“There’s that unwritten rule of, no one wants to be the one to damage something that’s viewed as art,” he explains. “Any one can take a can spray paint on the wall. These people are artists in every sense of the word.”

While colorful lounge chairs speckle the RiverWalk during the warm months, the area is very accessible in the “off” seasons, too. In fact, staff has taken to calling it the “WinterWalk” when the white stuff falls, as the paths are regularly cleared of snow.

That applies to the cut, too: “The colors even pop more when you’re surrounded by a blanket of snow,” Pasco adds.

This post was originally published in 2013 and was sponsored by Excellent Schools Detroit.