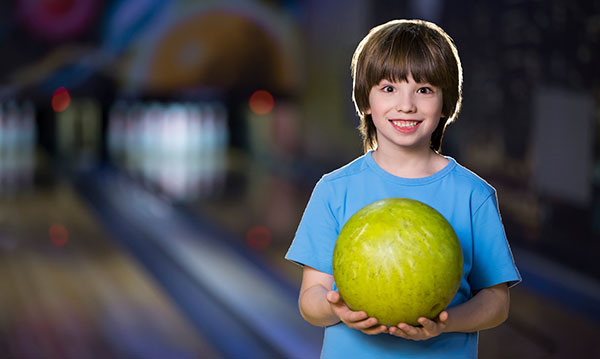 Choosing bowling balls for kids may be difficult or confusing, especially because that person is young and growing every day.

But kids are gaining an interest in bowling earlier than they used to, says Vince Imbier, who runs Vince’s 300 Bowl Pro Shop in 300 Bowl in Waterford. That means that picking out a bowling ball for a young child might be necessary – and there are a few factors to consider when looking at kids bowling balls.

“Everybody has different strength,” says Imbier. “Not all boys are stronger than girls.”

Bowling balls come in a range of weights from six pounds to 15 pounds, so there is a lot of space to grow as children age.

Imbier suggests a few easy rules for choosing bowling ball weights for young bowlers. The first rule of thumb is one pound for each year of their life, meaning if the child is 6 years old, they might throw a six-pound ball.

The other rule that is commonly used is one pound for each ten pounds of body weight, so if a child weighs 84 pounds, they might throw an eight-pound ball.

But every child is different.

“If the bowling alley has a variety of house balls, try throwing some of those,” Imbier says. “The child can see what they can throw easiest, then the pro shop can weigh it.”

Many people also want to throw a lighter ball, especially if they practice with a house ball that is not fitted to them, says Imbier. But, it is usually recommended that they throw a ball one pound or two heavier than they the ball they want to throw. That’s because a bowling ball that is drilled and fit to the owner’s hand is easier to handle. A lighter ball might be a bit harder to control.

As far as weights needed when they join teams, there are usually standards. Girls may want to throw an eight- or ten-pound ball, but Imbier says most coaches don’t want girls to throw a ball under 12 pounds. If it is too easy to throw, they won’t have as much control.

Boys in high school will usually throw a 14- or 15-pound ball, but coaches will be able to help determine the best weights for them.

Another aspect to look at is material.

Bowling balls come in a few different materials, each with its own advantages and disadvantages.

Plastic balls are cheaper and come in many colors, making them attractive bowling balls for kids. But they don’t hook, which is to say they don’t curve on the lane.

“A lot of high school bowlers have a plastic ball for spares,” says Imbier. “They use them for one pin spares where they need the ball to go straight instead of curving.”

A plastic ball is good for younger kids if they may change weights more frequently, or for kids who don’t yet have an advanced knowledge of how to hook a ball.

As the child ages, if they are looking to join a school team or league, a urethane ball is considered more high performance. They are also more expensive, but for someone who has leveled off the weight they throw, it might be a worthwhile investment.

Similarly, reactive resin is expensive, but is considered a high performance ball as well, according to Imbier. The resin creates more friction, and therefore more hook. These higher-end balls will help improve an experienced bowlers game.

Ready to get your child started in bowling for kids? Check out your local pro shop and they will be able help choose the right ball for your child. As kids age, it will be easier for them to know what is need.