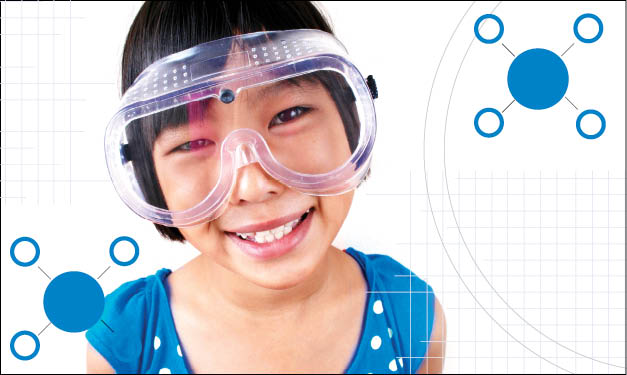 There’s a gender gap in science, and it’s not new. Boys tend to outperform girls on tests in STEM (science, technology, engineering and math) fields, and while the achievement gap has narrowed in the past few years, it’s still true that fewer girls than boys ultimately end up pursuing those subjects into college and the professional world. The rift is particularly evident in the more math-intensive fields like physics and computer science.

Why does this gap in performance exist? It may not be for the reason you think. It’s not necessarily that girls aren’t capable scientists, or not interested in the subject. Instead, some contend that it’s because they are discouraged from following these interests.

Starting when they’re young, girls encounter myriad messages that they might not “belong” in science. These messages come from culture, from their peers and, perhaps even unintentionally, from authority figures.

A 2010 report from the American Association of University Women explored the social and environmental barriers girls face when it comes to STEM subjects. Teachers report very young girls showing an equal enthusiasm for science as boys, but somewhere around middle school that begins to change. That’s the age when kids naturally become more self-conscious, more concerned with friends and building their image.

Oftentimes, science and math aren’t seen as “cool” subjects, and that can make it hard for a girl to stick with it, regardless of her interest level. And when women are underrepresented among science educators and mentors, as they often are, that lack of visible role models can make it even harder.

Of course, boys risk being labeled as “geeks” for liking science, too. STEM subjects are no walk in the park for either gender, but girls – in addition to risking social fallout for liking science – are also getting the message that they’re not supposed to be good at it.

Are boys naturally better at science and math?

Science, math and engineering have traditionally been considered “male” subjects, while writing, art and humanities belong to girls. Many people believe that boys and men are biologically better equipped for the more math-intensive fields.

But a recent test given to students across the world suggests the gender gap in science has more to do with culture – political inequality between the genders – than with genetics. In cultures (like ours) where the norm is to assign the more math-intensive subjects to men and boys, and more social-oriented ones to girls, the achievement gap is larger than in cultures that do not assign those differences to the genders.

From the girl who gets a doll when her brother gets a Lego set to the physics teacher who subconsciously calls on boys more often than girls in class, those cultural norms are pervasive and hard to overcome. Young girls internalize those messages, and that can actually influence what subjects they prefer and guide them away from science and math, the 2010 AAUW report found.

If girls believe they are biologically not cut out for math and science, that can result in lower aspirations, studies suggest. They may not try as hard on tests in those subjects, only reaffirming the negative message.

Give a girl the idea that she has to be exceptional to succeed in a “male” field like science or math, and she may let herself be pushed elsewhere.

The U.S. Department of Education has found that girls – and boys – who have “a strong self-concept regarding their abilities in math or science” are more likely to choose to pursue science subjects and, importantly, more likely to perform well in those areas. This suggests that improving girls’ confidence in their science abilities could actually influence their performance and choices. But the issue runs deep, and to address it we need to start at the beginning, before girls are exposed to that negative messaging.

Instead of thinking in terms of fixed abilities, parents and educators should emphasize each child’s potential for growth, says Sarah Jacobs, who runs design-and-robotics haven The Robot Garage in Birmingham and Rochester Hills – and soon also in Grosse Pointe Park – with her husband, Jonathan. Their daughters all have found a way to apply their unique interests and talents at The Robot Garage, though only one is strongly interested in engineering, Jacobs says.

Jacobs sees a tendency to assign kids a label early on – the girl who loves playing her violin will be a musician, the boy who won’t put down his baseball mitt a future athlete. There’s nothing wrong with encouraging those interests, she says, as long as kids aren’t getting the message that it means they won’t be good at other things.

“Every single industry needs all kinds of talent,” Jacobs says, so it’s important for parents and teachers to encourage girls to explore how their talents can be applied in different fields.

“Instead of trying to tell everyone that they should be interested in becoming an engineer or scientist, which not everyone’s going to want to do, I think it’s more important to meet kids at their own level of interest,” Jacobs says. “Whatever they’re interested in, science and technology is a part of it.”

Changing the status quo may take redesigning education – not necessarily to be more “girl friendly,” but more geared to reach each student on her – or his – own level.

At Berkshire Middle School, located in Beverly Hills in the Birmingham Public Schools district, educators approach science education with each student’s individual needs in mind, says principal Jason Clinkscale. Instead of creating a one-size-fits-all approach, they try to reach each student on a level they can relate to.

“That’s what it’s always about, is trying to find a way to tap into the individualized needs of the student,” Clinkscale says.

That can mean mixing up the classroom routine by bringing in an outside program, or infusing art classes with technology like graphic design software and digital photography. The goal is to get students thinking about science in a way they might have not considered otherwise.

The school is seeing positive results reflected in its test scores, Clinkscale says.

It’s important to give girls and other minority groups opportunities to explore STEM-related activities in an environment where they won’t feel singled out, Clinkscale says. For girls, that means creating an environment not dominated by males. Clubs, special classes and other activities – either through a girl’s school or in the community – can be an avenue to finding like-minded peers and forming those essential connections.

Lawrence Technological University in Southfield offers a selection of week-long summer camps for teens – some just for girls – designed to provide mentoring and exploration opportunities for students interested in science. For the kid who thinks she might be interested in, for example, biomedical engineering, the camps provide an environment to explore opportunities within the field and build a sense of “I can do this,” says Lisa Kujawa, assistant provost for enrollment management at LTU.

“When you throw students directly into a class – when they really might not have had the preparation, or no one has explore-d the opportunities with them that might be there in the field – they’re clueless,” Kujawa says. “And when you’re young, sometimes you just don’t really know.”

These kinds of hands-on experiences – summer camps, clubs and others – can help girls approach regular science classes with more confidence, ready to build on that knowledge, Kujawa says. And it’s important to get groups of girls working on things together, Jacobs adds, because spreading the word that way is much easier than one girl coming back from a class with all boys and trying to explain to her friends why it’s fun.

“It’s very hard to be the only person doing something,” Jacobs says. “There’s sort of a social isolation that goes along with it, because the balance isn’t there. So unless you’re willing to say, ‘I’m willing to spend a lot of time doing something where I’m going to be a minority,’ it’s a very hard path right now for girls.”

Parents are uniquely equipped to make science accessible for girls, because parents know their child’s interests better than any school, Jacobs says. Girls may discover something they had never considered when encouraged to explore their interests through the lens of science and technology.

Parents can help girls see that science can be fun – yes, FUN – and doesn’t mean giving up the things she loves. Whatever her interests – whether she likes art and creativity, sports and competition, or math and problem-solving – she can apply those strengths to a variety of subjects.

It’s important for parents and teachers to remind kids that “if there’s something that they love, they will find a way to make whatever their natural talents are fit into that world,” Jacobs says.

Traditionally, following a path in STEM hasn’t been easy for girls and women. The good news is that the climate is changing. And today, girls in those fields may actually have an edge when it comes to college scholarships and the job market because of the eagerness to change the status quo.

Improving girls’ confidence in their own abilities – by fighting stereotypes and reaching them on an individual level – can help to cultivate a generation of capable, enthusiastic women scientists that is long overdue.

Understand that girls do learn differently from boys; your child may respond best to a verbal approach, for example.

Provide the tools for education, whether that be a science-related toy, access to educational software or a family trip to the local museum.

Look for clubs, special classes and other activities available through your child’s school or in the community.

Help your child find a scientific role model or mentor – or, if you work in a science-related industry, take your child to work with you.

Find examples of science and technology in a subject your child enjoys and share that knowledge with your girl. (Science is everywhere – in cooking, household electronics, a visit to the doctor, the car in the driveway.)

Encourage a mindset of potential growth – that skill in any subject will increase with further study and experience.

This article originally appeared in the February 2014 issue of Metro Parent and has been updated.