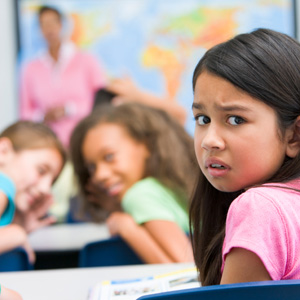 Some kids are open with their parents about challenges they’re facing at school. When it comes to bullying, though, many remain silent. But there may be very visible signs. Literally, bullying might be making your kid sick.

Psychosomatic problems – think headaches, stomachaches and sleeping issues – could be a direct result of bullying, the University of Padua in Italy reports. Its study, to be formally published in the October issue of Pediatrics, the journal of the American Academy of Pediatrics, identified and examined 30 existing studies of school-aged kids. In all, it covered 220,000 youth from 14 countries, U.S. News reported.

The findings? These kids and adolescents were at “significantly higher risk” for such problems vs. their non-bully-involved peers, according to Drs. Gianluca Gini and Tiziana Pozzoli, who wrote the study. It reaffirmed their findings in a similar 2009 study, which also mentioned symptoms including poor appetite and bedwetting. U.S. News noted that backaches, neck or shoulder pain, trouble breathing, tense muscles, nausea and diarrhea were called out in the new study.

The AAP defines bullying as a different camp from fighting or teasing. Instead, it’s “repetitive, negative actions” by a single person or group, singling out one victim.

Increasing global attention on the issue – and its damaging impact on kids’ self-esteem and (in extreme cases, even ending in suicide) – has prompted schools and states to take action. Back in late 2011, Michigan was the 48th state to pass an anti-bullying law that requires all schools to have anti-bullying plans.

“I’m not surprised they found a link,” says Jessica Jenkins, Ph.D., a licensed psychologist here in Rochester Hills. “I had a case over the summer where someone was showing signs of social concerns that were manifested as an upset stomach and feeling sick.”

Jenkins says in younger children, a lack of verbal skills and difficulty with communicating can sometimes be to blame for kids’ silence, when it comes to reporting bullying to their parents.

“Developmentally, depending on the age, kids don’t always have the same ability express what’s going on,” she explains.

Jenkins adds that parents should look out for any changes in their kids’ normal behavior or routine, including sleeping, eating, social interaction, personality and school performance.

“If you have specific concerns, it’s important to bring it up, get it out in the open and start a conversation,” Jenkins says. She adds if parents notice severe changes in their child’s function or behavior, or if the child is exhibiting unexplained illnesses, it’s best to seek professional help sooner than later.