Since the beginning of time, parents have fought tooth and nail to shield their children’s innocence. This includes coming up with inventive nicknames for their kids’ genitals, and other private parts. And the names parents give private parts around kids certainly are creative – “pee pee,” “cookie” and even “broccoli.” Yes, broccoli.

Parents jump through rings of fire – figuratively, of course – to keep their kids from saying the words “penis,” “vagina” and “breasts.” But why?

Does this actually help the kid? “Not at all. I completely disagree with (it),” says Dr. Arsala Bakhtyar, a pediatrician with Beaumont Healthcare Center Canton. “I think parents should teach them (the anatomically correct terms) as early as they’re teaching any other body parts to their children.”

Granted, flipping to a model of sex-positive parenting can be tricky – and feel uncomfortable. But those cutesy names parents give private parts can actually be problematic as kids get older. Here’s how you can – and why you should – kick the habit.

Bakhtyar says parents do it for the sake of propriety. Basically, moms and dads are trying to save themselves from embarrassment, they don’t want their kid to scream, “My vagina hurts!” while in line at Kroger.

“I really think that there are different perspectives, and some parents feel that if they use the real names, it would be very blunt,” Bakhtyar says. “Society has deemed it very inappropriate.”

Parents usually start this practice when their kids are between the ages of 3 and 5. Bakhtyar says she has even dealt with 7- and 10-year-olds who still use silly nicknames for their private parts.

Bakhtyar says using common euphemisms like “front,” “bum” and “wiener” is OK when a child is between the ages of 18 months and 2 years old. But, from then on, she advises parents to use the anatomically correct terms.

“(Parents) should teach them as they’re teaching their eyes, nose, mouth (and) ears, just the way they have to tell them vagina, vulva, penis, buttocks … everything,” she says. “I don’t think that parents should make it sound like it’s something that we have to be ashamed of or embarrassed about.”

And if you’re worried about your child getting in trouble for using the correct terms at school, tell them it’s OK to use these terms at home, but it may be best to use the euphemism “private parts” for the sake of other people’s comfort. Just be sure to define the term.

Bakhtyar suggests saying something like, “When you’re using the term ‘private parts,’ these are the organs that you are covering with your swim suit.”

However, Bakhtyar says it’s best to use the anatomically correct terms at home in a casual way. For example, if your child approaches you saying, “My wiener hurts,” you can say, “Where does it hurt on your penis?”

Bakhtyar says when parents shush their kids when they use the correct terminology, it alters the child’s perceptive on their relationship with their parents.

“That gives the child the idea that, ‘My parents are very ashamed to talk about it,’ so then they start hiding things from (their parents) about these areas,” she says.

Bakhtyar says using the anatomically correct terms comfortably at home has multiple benefits for children and develops a stronger bond between children and their parents.

“It’s important for younger children to learn the anatomically correct terms for their genitals,” she says. “It will make them less vulnerable to sexual abuse, (because) the offenders will understand that these children have a very strong relationship with their parents.”

Kids who are shushed when they speak about their genitals are less likely to speak up if they experience sexual assault because they feel embarrassed and ashamed, Bakhtyar says.

“If the children are using the real names, (predators) know children have a good comfort zone built with their parents, so they’re also hesitant to touch these children,” she says.

Beyond protecting the children from sexual assault, teaching them the correct terms for their genitals, instead of the goofy names parents give private parts, has positive effects on their mental health too.

“It helps children develop a healthy, more positive body image,” Bakhtyar says. “Instead of using nicknames that their genitals are something shameful or bad, it gives children the correct language for understanding their bodies.”

Having an open and honest relationship with your children is always best for their health – whether it’s about proper names for genitalia or, down the road, issues like sending explicit text messages or being sexually active.

“If we just kind of breathe in and think about it and understand that these are the right things for the kids to know, that these are the parts of their body and they can be proud of it, and it’s OK to use these words,” Bakhtyar says, then it ultimately benefits the entire family. 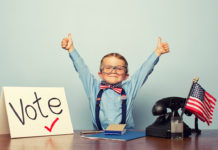