That's according to a new study, but it isn't necessarily a bad thing, researchers say. Here's why. 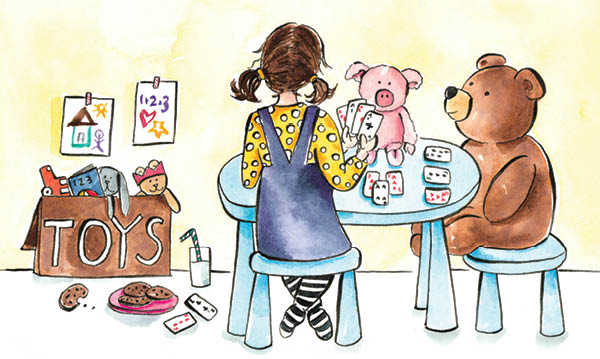 The Tooth Fairy is real. Your binky journeyed to a farm down South to enjoy warmer climates. That flower (that is a flower, right?) picture is the most beautiful drawing I’ve ever seen!

As parents, you tell your kids all sorts of lies – some to make your life easier and others to protect your wee one’s feelings. Then, kids flip the script and start lying to you.

“We were really interested in whether or not, if children had a lot more practice in it, if this is something they can learn over time,” says study author Gail Heyman, a psychology professor at University of California, San Diego. “We thought it would be fascinating if we could watch development as it happened.”

That’s what they did over a period of 10 days, playing the same game with 3-year-old kids. By day 10, most were able to deceive their opponent.

But don’t be so quick to call them liars, Dr. Eric Herman, a clinical psychologist with Children’s Hospital of Michigan in Detroit, says.

“At that age, there’s no moral thought process, so we can’t really call it lying or deceit,” Herman says. “They just kind of figure out how to play the game to win.”

Before age 3, children typically don’t know how to deceive, so Heyman and her colleagues looked at 3-year-olds to determine if kids that age could learn the art of deception in order to win a simple game.

See what they did there?

At first, many children made no effort to deceive their opponent.

“Some of them were not too thrilled about losing repeatedly,” Heyman says. “But when they discovered they could deceive and win, that was often a very exciting moment for them.”

And kids didn’t need to be directly taught. In fact, once they did it, they did it consistently. “This is more like an aha moment,” Heyman says.

There’s a reason why some kids were able to decipher the way to deceive their opponent and others were not – development.

“Lying is actually a cognitively difficult process,” Heyman says. These children exercised cognitive control, preventing them from blurting out the truth when lying, as well as “theory of mind,” which, Heyman writes on website The Conversation, “is the ability to understand that others don’t necessarily know what you know. This skill is needed because when children lie, they intentionally communicate information that differs from what they themselves believe.”

“If it’s a nice white lie, they even encourage the child,” Garcia says, with something as simple as dad saying, “Don’t tell mom.” If you want to discourage lying, watch your behavior, he says. “We have to teach the kids to become a better person. We want them to be smart, not deceitful.”

When it comes to games, Herman adds, it’s natural to want to win. But kids need to learn how to be fair.

“We have to teach kids how to be good winners and good losers and stay focused on the idea of the game”– which is to play and have fun – “whether you win or lose,” Herman says. If kids are having a hard time losing, maybe they aren’t mature enough to play that game.

While it’s also natural for a kid to lie, Herman says parents can still discipline their child for lying. “Don’t make too big of a deal about it, but there should be a consequence based on the age and the behavior.”

For example, put the game away and try another day.

Stay calm when disciplining, Garcia adds. “Cool down, analyze the situation, then talk to the child about it.”

And reward kids when they’re honest. “Later in life, when they are faced with even tougher situations, they’ll make the right choices,” Herman says.

Looking for the best place to score a paczki for Fat Tuesday? These bakeries in metro Detroit and Ann Arbor have you covered.
Read more
Outdoors