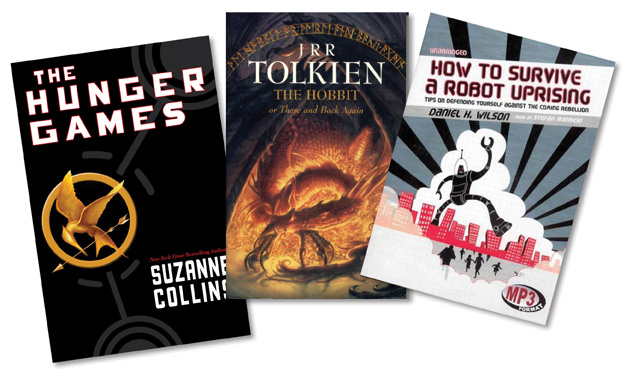 Got a teen in search of a great summer read? Or looking for something that’ll spark a disenchanted reader’s interest? Try these nine choices. Metro Parent got in touch with two local libraries, the Ferndale Public Library and St. Clair Shores Public Library, to hunt down the best in classics, new releases and "undiscovered gems," all geared at kids ages 13 to 17. Be sure to add your favorites to the comments section below!

The Hobbit by J.R.R. Tolkien: Bilbo Baggins is a hobbit: a human-like creature who is half as tall as a human. He and 13 dwarves are recruited by Gandalf, a wizard, to locate and recover treasure that was stolen by the dragon Smaug. Bilbo and the dwarves must face a variety of obstacles on their journey, such as trolls and a hobbit-eating Gollum, before they can reclaim the treasure.

The Outsiders by S.E. Hinton: Three orphan brothers must face a series of trials as they attempt to find their place within a society riddled with prejudices. Two gangs, the Greasers and the Socs, have split many of the boys’ peers into two groups who hate and kill each other. Ponyboy and his brothers struggle with gang involvement and violence aplenty as they try to stick together and rise above the vices and hatred of their society.

To Kill a Mockingbird by Harper Lee: A classic and expertly written coming-of-age novel, To Kill a Mockingbird tells the story through the eyes of Scout, a girl about to reach adolescence. Her father, Atticus, is a lawyer defending an innocent black man accused of rape in a violently prejudiced southern society. Scout realizes how cruel people can be, but through an incident in which her life is saved, recognizes there is still justice even in the racist society in which she lives.

The Scarlet Letter by Nathaniel Hawthorne: Hester Prynne is living in 17th century Puritan America when she is charged with adultery and forced to stand on a platform in front of her Boston community with a scarlet letter "A" on her chest and a newborn baby in her arms. Hester refuses to say who her child’s father is, and accepts a life of isolation while Roger Chillingworth, Hester’s supposedly long-lost husband, attempts to find out who baby Pearl’s father is himself. Meanwhile, Rev. Arthur Dimmesdale, a much loved minister, is suffering from declining health and put under the perverse Chillingworth’s care.

The Absolutely True Diary of a Part-Time Indian by Sherman Alexie: Junior is a Native American boy living on the Spokane Reservation. He transfers from the reservation school to a school dominated by wealthy white kids in hopes he can advance his dream of becoming a successful cartoonist. Junior faces antagonism at both his new school and on the reservation from family who believe he is rejecting his roots. Underlying the story is the message of determination.

The Hunger Games by Suzanne Collins: Sixteen-year-old Katniss Everdeen, living in a future which seems to have reverted to barbaric means of entertainment, is chosen to represent her district in the hunger games. This means she is forced to participate in a battle to the death broadcast on live TV against another kid between the ages of 12 and 18. Despite her agility and skill with a bow and arrow, Katniss is sure she will die, leaving her mother and younger sister to starve. Katniss’s admirable strength and bravery make her a solid protagonist in this powerful story.

The Great Wide Sea by M.H. Herlong: Ben and his younger brothers are whisked away on a yearlong sailing adventure when their father buys a boat. Still recovering from their mother’s death, Ben’s father thinks that the change of scenery will be beneficial for the boys and himself. Just as everyone is getting used to being in such close quarters, Ben’s dad mysteriously disappears and the boys are left to fend for themselves as they attempt to find their father.

Rock ‘n’ Roll Camp for Girls: How to Start a Band, Write Songs, Record an Album, and Rock Out!! by Carrie Brownstein: Learn how to do it all with this guide written with the help of experienced female musicians. Learn how to play an instrument, get the word out about a show, self-defense and much more with this comprehensive guide.

Poetry Speaks Who I Am: Poems of Discovery, Inspiration, Independence, and Everything Else by Elise Paschen: Over 100 poems ranging from classic to modern fill this book with selections that will make your teens smile, laugh and maybe even bring a tear to their eye. Included is a CD with 44 tracks with poems read aloud, most exclusive to this book and read by the author. This spectacular collection of poetry will be a great addition to your young adult’s summer reading list.

How to Survive a Robot Uprising: Tips on Defending Yourself Against the Coming Rebellion by David H. Wilson: If your child is looking for a humorous read this summer, this book will not only satisfy their funny bone; it’ll also educate them about robotics. Wilson, a roboticist, presents readers with hilarious how-to information detailing how one can defeat an attack, should they ever be confronted by a rebellious robot.