In her role at Bingham Farms Elementary School, this special teacher specializes in working with toddlers who have autism. 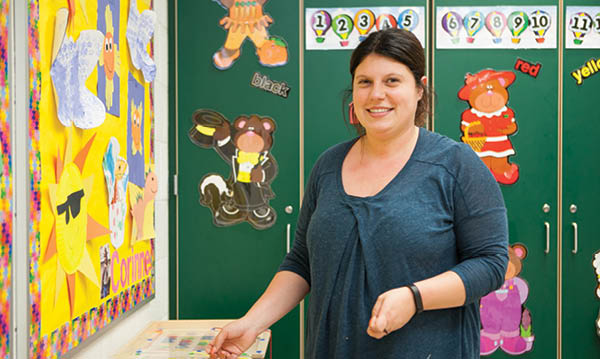 Even though her son Robert, 3, has only been working with his teacher Heather Petrus since January 2016, Stephanie Jones has already noticed how much he’s grown.

“I see so much progress with him because of her work with him,” says Jones.

Robert, who has autism and a sensory processing disorder, is in Petrus’ ASD preschool classroom at Bingham Farms Elementary. Jones says before Robert started in the class, Petrus took them around to every area of the school where he would spend his day. Petrus now writes her detailed letters about Robert’s day. What’s more, Jones says she has received advice from Petrus on working with Robert at home, and they’ve worked together to figure out where to turn for ABA therapy.

“We’re a team,” Jones says of Petrus. “I feel like she’s just part of our family.”

Petrus, who previously taught at a Roseville preschool program, went back to school in 2013 to specialize in working with kids on the spectrum.

“I’ve always had a place in my heart for those kids who have special needs. I have more patience for them and more understanding for them,” says Petrus, who just completed her master’s degree in special education with a certification in ASD from Oakland University.

This has been her first school year at Bingham Farms, where she’s worked with two paraprofessionals in a class of four. She says getting kids with ASD in the classroom as young as preschool is great “because it just helps them to get into a routine. You get to kind of decrease some of the behaviors so they don’t escalate when they get older.”

And her classroom is all about routine. Petrus tries to establish that as best she can throughout the daily activities.

While at school, students learn letters, colors, shapes and days of the week – the usual preschool lessons – and occasionally play with the general education preschoolers. But the kids in Petrus’ classroom have the added bonus of time in their own room to work on their personal goals, whether learning how to hold and use utensils or self-regulate. “We try to run it as much as we can like preschool, but at the same time we’ve got to kind of individualize it to meet their needs.”

The job certainly comes with its challenges due to each child’s unique needs.

“It’s hard because some days you just want to go in their brains and see what they’re thinking,” she says.

But each student’s set of challenges means exciting breakthroughs. Like with Robert, whose big moment was when he walked to the circle time gathering all by himself. “Everyone has their own little hurdles,” she says.

Petrus, who describes her style as easy going, says her main goal is that the students simply “do the best that they can do” – and for her, that means setting the bar higher for what they can achieve.

“Just because they’re, as people say, ‘different’ – they’re not different. They’re human just like all of us. They just have a little bit more challenges than we do.”

Ultimately, Petrus has one wish for each of her students’ futures: “That they can still shine like they do now. I just hope that light never goes down. I just want them to shine – to be successful.”