Helping Your Child Adjust to Changes at School 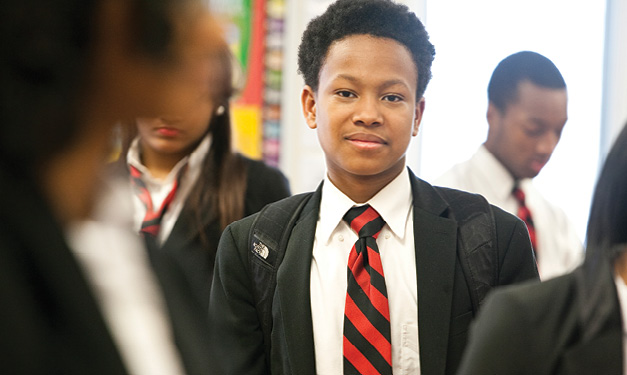 We all remember a time when we were the new kid in class, when we had a close friend move away, or when a new teacher was hired in. It can be scary and cause us anxiety. While changes are all a part of life – and we eventually adjust – kids experience similar changes at school, an environment where feeling comfortable, safe and stable is important.

As Kathy Douglas-Aska, social worker at Flagship Academy, notes, things can change so much outside of school, sometimes, “school is the only place where we can have stability.”

How schools are helping

Thinking of changing your child’s school? These three Detroit parents handpicked their kids’ schools. Learn about their experience and get advice.

At Bates Academy, Dr. Cleo M. Moody, principal of the pre-K-8 school, has a few tricks up her sleeve to help new students adjust to an unfamiliar learning environment.

“One of the things that I found to be helpful is to have an open-house reception,” she says. Last August, parents and students came in for a meet and greet, and Moody says it was well received.

On the first day of school, she posted schedules for the kids on the wall, so they knew where they needed to be. Parent and staff greeters were stationed throughout the building, and she labeled the ends of the hallways with room numbers and teachers’ names.

During the first week of school at U of D Jesuit, Hassett meets with freshmen in small groups and does ice-breaker activities, as well as a survey about their goals and fears. When a new student comes into the school, Hassett says U of D Jesuit typically walks the kid around the building. Hassett even reaches out to the teachers to let them know a new student is coming and fill them in on the teen’s background, so they can make him or her comfortable. This way, staff also has an idea of where the student is at academically if he or she transferring.

Being a new student at Flagship Academy means being paired with a peer partner who will show the ropes, Douglas-Aska says. The peer partner will go from class to class with the student, showing him or her how to use the lunch line and where to keep belongings.

For students who transfer in the middle of the year, Douglas-Aska says she’ll interview parents to make sure the school understands why the student is switching schools and if there’s anything they’ll need to address when the student comes in, such as anxiety or behavioral issues.

Even seeing new faces around the school can be an unsettling change for kids. As the new principal of Bates this year, Moody took the time to send out an introductory letter, which she also posted online. Now, she’s taken to doing this for staff, too. When a teacher departs for maternity leave or is out sick, Moody writes up an introductory letter to announce any new staff in the building, including substitute teachers. The letters are handed out and posted online. That way even parents know who is working in the school, too. “It makes that transition a lot easier,” she says.

The students themselves even have a hand in getting to know new teachers and staff. Moody says the student newspaper made the effort to interview her when she first started, which made her feel more comfortable at the school. “I thought that was such a nice ice breaker for me,” she says.

Of course, sometimes transitioning isn’t always quick and easy, and changes can have students stuck in an emotional rut. During the early months of school, Hassett stresses to students that if they’re feeling uncomfortable, anxious or emotionally down, they can come see him at any time.

“We’re continually throwing out the welcome mat,” he says.

And the faculty plays a huge role in keeping an eye on students and referring them to the counseling staff if they suspect somebody is struggling, he adds.

Parents play a big role, too. Part of helping your kid shake the nerves of going to a new school might be taking her to the school before she begins for a tour.

Christine Wingate, a parent of two at Flagship Academy, says her daughters Joy and Grace weren’t really nervous to start at their new school.

“They were excited because they got the feel of the school beforehand. The principal gave us a tour of the school. She set up our appointment,” Wingate says. This way, the kids get a feel for the atmosphere and can meet a familiar face, like their soon-to-be principal.

Wingate suggests parents sit down and talk to their children at home before school starts to let them know what to expect on the first day. That might include explaining that old friends may not come back. Wingate says to keep in mind school is like a job for children – it’s the majority of their day and a huge part of their life.

Parent Joi McIntosh, whose son Joshua has attended Bates Academy since kindergarten, recommends parents instill some self-confidence in their children and reassure them they are nice people and will make new friends.

“Don’t forget, they don’t have a lot of friends. They haven’t been on the earth long enough. So they treasure those they have,” she says, noting parents should try to just be patient and caring.

Or parents might try comforting their child by relating to them.

“Maybe sharing an experience where you were new and how everything worked out for you,” McIntosh says.

If your child is still panicked about the inability to make new friends, encourage him or her to join an after-school activity or club. Moody says Bates Academy offers many extracurricular opportunities, which she explains can be helpful for students looking to make new connections.

But one of the most important things parents can do for their child? “Remember, always ask, ‘How was your day?'” Douglas-Aska says. This can be a good conversation starter that could lead to uncovering a social dilemma your child is struggling to respond to.

If you think your kids are having trouble adapting to school changes, there are steps parents can take – and signs to watch for.

Hassett says teachers at his school alert him if a kid is looking down and upset, or if they’re struggling academically. Parents will want to keep an eye out for changes in behavior, Douglas-Aska adds. These cues could be signs of an underlying problem.

If parents notice a shift in how their child is acting, reach out to the counselors or social workers at his or her school. Hassett notes that counselors rely heavily on the people who look out for the students to let them know who might need a hand.