I Hate Being Room Mom 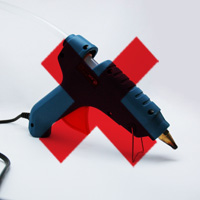 "Do you have your own glue gun?" Patti’s teacher asked. I tried not to burst out laughing. It was just another moment when I had to ask myself why on earth I signed up to be room mom.

But I know why. I went to the room parents’ sign-up meeting at the beginning of the year, that’s why. I planned to volunteer as a mere assistant room parent with my friend Becky who, as a mom of 5, was skilled at the art of coming up with games for the Halloween party, crafts for the Christmas party and snacks for the Valentine’s party. I could simply follow her lead while enjoying the fun at Suzi’s second grade class parties. Hoorah!

But as the morning wore on, I saw that no one was signing up to be room parent in Patti’s fourth grade class. As a matter of fact, no one had signed up for any of the fourth or fifth grade classes. I felt bad. Patti’s third grade class hadn’t had a room parent, and her teacher was none-too-happy about setting up the parties all year long. In kindergarten, all the parents want to help in the classroom – but that enthusiasm seems to wane as the years go by.

With heartfelt zeal, I grabbed up a pen and wrote my name down, volunteering to be Patti’s room mom.

What does it mean to be room mom? You have to be well-organized, love to bake those cupcakes and cookies, love to plan parties, be a whiz at crafts and be a social butterfly who knows all the moms.

Well, I’ve organized groups before, I know how to do this, I thought. Seven minutes after I sent out my first list of assignments for the Halloween party, my phone rang. "Hey, I’m supposed to bring paper plates," a mom I’d never met said angrily on the other end. Was this how it was going to be?

In most cases, absolutely not. The other moms have been so helpful that I haven’t had to bake or bring much to the parties. They’ve planned games and crafts and the teacher has been a wonderful help, too. I do catch wind of a little grousing by paper plate mom now and then that the game prizes don’t aesthetically match the game or some such nonsense, but that one is the exception to the rule. My biggest problem is my own ineptitude.

For the Christmas party, I thought kids could pass candy canes back in forth from candy canes they would clench in their teeth. Eh, maybe the promise of germ swapping and AWKWARDness of 9-year-olds getting so close to each others’ faces was not a good plan, the teacher hinted.

For this year’s Valentine’s Day party, Patti’s teacher saved the day. She had a craft for me! Bad part: It involved hot-glue-gunning 104 Popsicle sticks together to make picture frames for the party craft.

I spent all of Valentine’s weekend gluing those darn things together and Googling how to get dried hot-glue out of one’s hair and whether my glue-gun-stick munching dog would require stomach pumping (thankfully, no).

But the best news is, this is the last party of the year I will run! Yay!

And next year, I will take the advice of another mom who has had her share of volunteering, but knows that guilt and volunteering fervor sometimes takes over sensibility.

"Just don’t go to the sign-up meeting," she whispered.