I Love My Kids' After-school Activities 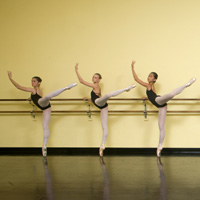 When my girls were little, they wanted to dance – so I signed them up right away. I was so excited, sitting in the dark room with the two-way mirror, watching every adorable move they made. Soon I was wondering about their futures. Maybe there would be dance contracts and competitions. Trips to New York to see them on Broadway!

But when it came time to sign up again, both Patti and Suzi said they were bored and wanted to try gymnastics. They never looked back, but I was shocked and sad. How could we leave it all behind?

So I became a gymnastics mom. I bought them the prettiest suits I could find. I watched them from the observation booth above the gym floor. They looked wonderful jumping about down there. Were they too old, at 4 and 6, to get started on an Olympic career? Or maybe we could eke a college scholarship out of these cartwheels and back flips? I studied the sport online and was ready to settle into that observation booth for the next 10 years.

Problem was, the further Patti progressed, the more stressed she got. I was annoyed when she refused to start competing. But she was ready to move on. Suzi was bored. We continued through the end of the session. Then we were done.

I tried to be a little more aloof when Suzi suggested they take up ice skating. Grandma bought them skates. I didn’t buy fancy skater duds. It was easy to be a little colder to this sport, with my rear end freezing on the rink’s aluminum bench. Watching the girls fall dozens of times at their first lesson was a bit disconcerting, too. But once they started floating across the ice I was smitten with this sport, too.

Of course, it was never really the sport itself. There’s something exhilarating about seeing your kids take on a challenge you could never master yourself. Watching them dance, turn perfect cartwheels and glide across the ice made me feel the joy of their experience and the thrill of their unwritten potential. But I was beginning to understand that the experience had to be about them, not about me.

After they quit skating too, I held back on activities. I wanted them to think harder about what they really loved to do. Eventually Suzi, 6, decided on ballet. I signed her up at a new studio. Eight-year-old Patti was noncommittal and became a spectator like me. She learned, by watching her sister, that ballet combined beautiful music with the athleticism of gymnastics and the grace of ice skating. Patti wanted to dance, too.

Now both my girls are excited to go to class each week. And when they dance, I can see how determined they are. I know they really care about ballet and doing their best. As for me, I’m trying to let it be about them. I don’t watch every move they make and I don’t plan their future with the Bolshoi.

At their first recital in December, my mother was disappointed that the girls’ dance was so short, as she’d driven many miles to see it. But the journey has been much longer for me. When they took their bows, I wiped tears off my cheeks and cheered from the back of the theater. I didn’t care what their performance said about their futures. I was proud about the work they had done and they love they put into it.

I guess I’m learning that’s what it’s really all about.