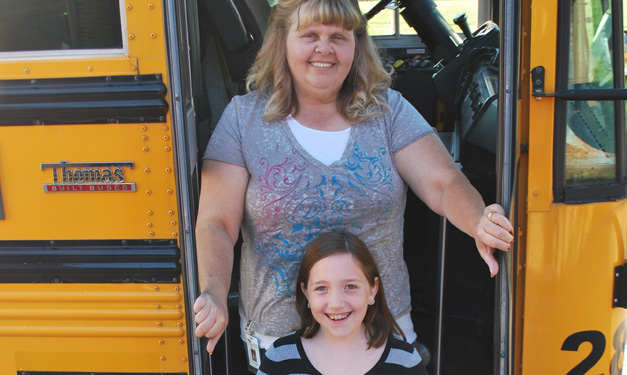 When it comes to getting kids from point A to B, Dawn Lemaster is grade-A. But not just because she's been delivering Oakland County kids to school safely for well over a decade.

Forget basic transportation – and think along the lines of Bus Cab quiz games (a la Cash Cab), prizes from the Treasure Tower, a "Buster the Bus" safety program and even a portable library. That's right: Lake Orion Community Schools bus driver Dawn Lemaster runs a big yellow bus with more pizzazz than that magical Mrs. Frizzle. At least, that's what her students think – and it earned her the grand-prize title of Thomas Built Buses Children's Choice School Bus Driver of the Year for 2012.

Why? Because "She is the most fun, loving, caring and AWESOME bus driver I've ever had," says Charlotte Anker, age 10 – the Carpenter Elementary School fourth grader who nominated Lemaster in a 900-word essay. The veteran driver, who's been with the Lake Orion fleet for 15 years, won a $1,000 Visa gift card – and Charlotte got a $1,000 education savings bond and laptop. Both took home Thomas Built Buses jackets and lunch boxes.

Lemaster, who was honored in a local ceremony in October 2012, explains it all got started when a friend suggested she give bus driving a try.

"I'm so glad I took her advice. Every day since has been a different adventure," Lemaster says on the Thomas Built Buses website. "I'm so honored to receive this award, as it means my kids really care about me and I'm making a difference."

And how. "I think after this long, she'd be a crabby bus driver," Charlotte observed in her essay, "but she loves her job and loves us kids!" And the kids help her out, too: If Lemaster has her grandkids over for the weekend, Charlotte adds, she'll ask her busload's advice on movies and what to make for dinner – and "this makes me feel like I'm important and that we're helping her a lot."

Thomas Built Buses is the leading manufacturer of school buses in the continent. It's been holding this contest since 2006, and more than 750 students nationwide entered submissions in the 2012 challenge.