The top things you should know to prepare yourself and your child for the often-tumultuous transition from elementary to middle school. 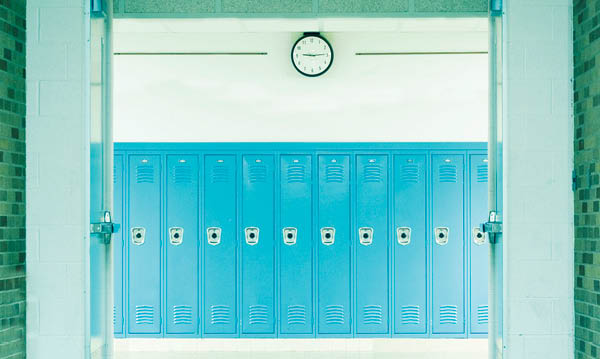 Amanda* braced herself for seventh grade. A dedicated student, she entered middle school in Farmington Hills fairly confident she knew the rules. But it was the unwritten rules that kept tripping her up.

“During lunch on the first day, my friends and I looked around the cafeteria and realized there was a courtyard with tables,” she says. “We grabbed our stuff and headed outside, but we were stopped at the door by someone telling us that courtyard privileges were for eighth graders only. We were so embarrassed.”

Later, Amanda walked to her fifth hour class to find the door locked and room dark. Nobody told her that in middle school, certain fourth hours are split in half by lunch. She wandered the halls until a staff member took mercy and helped her out.

Although these bumps felt mountainous, they’re molehills compared to the lunchtime incident at Royal Oak Middle School the day after the 2016 presidential election. As you may recall from the news, a group of students started a “build the wall” chant, with minority students feeling targeted and bullied.

After the episode was captured on video and posted to social media, former superintendent Shawn Lewis-Lakin issued a statement saying, in part, “We are working with our students to help them understand the impact of their words and actions on others. Our school district and each building in it works every day to be a welcoming community for all, inclusive and caring, where all students know they are valued, safe and supported.”

Indeed, that’s the goal. But anyone on the other side of eighth grade knows the truth: Middle school can be monstrous. To help, we talked about common fears with Amanda – a high school freshman at the time she was interviewed – and a couple of teachers who’ve seen it all.

What if … I get lost or trampled in the hall?

A bigger student body (with literally bigger student bodies) barreling through packed hallways during a few minutes between classes is a major concern – and a valid one, says Amanda. “It took me a few weeks to figure out the best way to go from class to class, where the least crowded hallways were and when I had time to stop by my locker.”

Looking back, she says, a school map and locker-combination test run wouldn’t have been a bad idea.

“You realize right away that there really isn’t time to stop and socialize with friends between classes,” she says. “There was a lot more swearing and actual fighting in middle school than there was in elementary. At first I was worried it was random and someone would pick a fight with me, but I learned pretty fast to keep my head down and just walk quickly past any drama.”

Going from one main homeroom in elementary to six different teachers with six different sets of expectations and six batches of homework each night is daunting.

Amanda confirms it was a harsh adjustment to leave a nurturing sixth grade classroom for an experience that careened wildly. “I had one teacher who clearly thought we were in college based on his minimal instruction and maximum homework load,” she recalls. “And another teacher who had us push our desks aside to do yoga on Mondays so we’d get the week off to a good start.”

In fact, experiencing this range of teaching styles and degrees of difficulty is perfect prep for high school – when grades really count. For Jillian Black, a former fifth grade at Detroit Premier Academy, a K-8 charter school, a key goal is readying students for middle school, which starts in sixth grade in her building.

“I cringe when a mom calls to say her son’s homework was ruined when he spilled spaghetti on it,” she says. “Students need to be independent and deal with the consequences themselves.”

What if …I can’t keep up in class?

Black says middle school is when teachers see a radical shift in attitudes. “Kids who were sweet and obedient the year before … now care more about what their friends think than the adults. There are fewer teacher’s pets in middle school.”

Developmental experts say this is the age when kids go from following rules to questioning them – it isn’t until around 15 that they understand rules are in place to protect the greater good.

“We expect the first couple months of seventh grade to be bumpy,” says Claudia Doughty, longtime Farmington area teacher currently at Warner Middle School. “This is an age group that responds well to a gentle hand – we push without steering” to get them ready to take the wheel themselves, she says.

To keep afloat in tough classes, Amanda adds, “Stay on top of your homework. Some nights you’ll have a ton and other nights barely anything, but as long as you track your assignments and pay attention in class, you really should be fine.”

What if …I don’t know anybody?

When Amanda got her schedule the summer before seventh grade, she eagerly showed it to her best friends – only to find she didn’t have a single class with them. “I was afraid I’d never see them again and we wouldn’t be friends anymore,” she says. “On top of that, I was afraid I’d be stuck in class with a bunch of strangers.”

Amanda’s mother remembers this time well. “I secretly thought it was a good thing so she would be less distracted in class,” she says. “But knowing how nervous she was, I assured her she’d see her friends at lunchtime.” And she did: She almost broke the courtyard rule with them, something they laugh about two years later.

But Amanda also made new friends and reunited with kids she hadn’t talked with since kindergarten. “You get partnered up a lot in middle school, so I made a lot of friends that way.”

The developmental spectrum is dramatic. Some girls are still playing with Barbie while others are dressing like her. Thanks to raging hormones and changing bodies, Doughty says even individual seventh graders “are not the same person two days in a row. One day they’re walking down the hallway holding hands with a boy and the next they’re in my room crying and wanting a hug.”

Kids at this stage are fragile and require a great deal of patience as they maneuver complicated social constructs. They all feel vulnerable at points, but they’ll find their niche.

“One of the best parts of middle school is expanding your group of friends through sports, clubs and extracurricular activities,” Doughty says. “If you’re not an athlete, we have some wonderful music opportunities. If you’re not musical, run for student government.”

What if … I get caught up in rumors?

Middle school rumors can spread like wildfire. “People passed judgment based purely on what you were wearing,” Amanda says. “I heard so many rumors in middle school, and I saw rumors end friendships.”

Topics range from who’s dating who to how far they’ve gone to what drugs were involved. It’s takes courage, Amanda says, but getting to know someone without blindly believing what’s been said about them is her preferred approach. And so is loyalty: “Be true to your friends and don’t spread any rumors at all.”

Bullying has always been an issue for this age group, going back to when we called it junior high. But social media has amped things up.

“Even though our students aren’t allowed to have phones at school, we know cyberbullying takes place at home,” with repercussions at school, Black says. “Even in person, bullying is sneaky. I have a close watch on my class, but all it takes is a few minutes out of sight for something to happen.”

Parent-teacher partnerships are key. “Find one teacher you can connect with and form a triangle of support with that person and your child,” says Doughty, who makes sure her students understand nothing ever stays secret forever.

“Teachers will always find out; kids will always tell. That picture you sent to just one person will be seen by so many more. Better that they learn these lessons now so they carry good practices into high school.”