How to Overcome Fear of Water

Help your kids feel brave in the swimming pool, lake or ocean with these tips from local swim school reps. 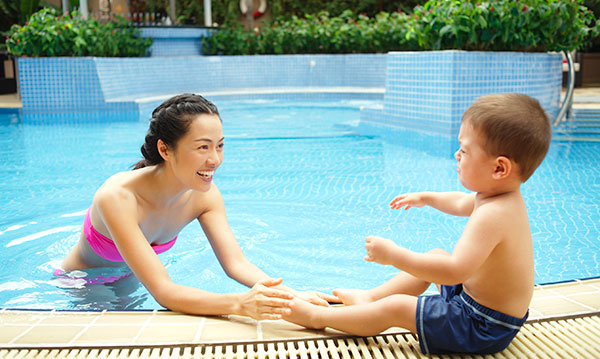 Macomb mom Jill Polisano never learned to swim. Now, as an adult, she is fearful in the water. Because her family has a cottage on Houghton Lake, swimming lessons are not optional for her sons Ethan, 7, and Jordan, 6. The boys started at the ages of two and three but both inherited their mom’s fear of swimming. They are still working on their skills but making great progress.

“We were the parents who were asked to hide during lessons so the boys couldn’t see us,” Polisano says. “Ethan was the kid who freaked out during baths if even a drop of water got in his eyes. As much as I try not to show my discomfort with water, I think that unfortunately they can sense it,” she says.

Ultimately it took several years, a change in swim programs and a few breaks for Ethan and Jordan to begin to swim and gain confidence about being in the water.

“Finding the right instructor was key. Everyone has a different style but once we found the right teachers we stuck with them and then the boys really started to take off,” says Polisano. Her sons currently swim at Goldfish Swim School in Macomb.

Ronda Brodsky, author of Aquatastic: Swimming Made Simple, says children are often afraid of the water because they don’t start lessons early enough. She recommends parents begin when their children are infants. Many aquatics programs have classes available for children as young as six months.

Brodsky and other experts say there are several ways parents can help a child overcome a fear of water.

Establishing trust in the water is crucial. This not only applies to a parent but also to an instructor, says Brodsky. The best way to establish trust is to not force a child in the water. Shari Strauss, formerly a manager and swim instructor at Aqua Tots in Canton, adds: “Swimming is best taught in an environment where a child feels comfortable and safe.”

Do not show your child if you are afraid as well, says Brodsky. The calmer you appear, the more comfortable the child will be. Similarly, Strauss recommends swimming as a family. “Allowing a younger child to see that a parent or older sibling is safe in the water can help ease the mind of a nervous child,” she says.

“If your child is upset about getting water in his face, don’t make a big deal about it,” says Orna Spencer, former manager of the Goldfish Swim School in Macomb. “Instead, say ‘you’re OK’ or ‘you did a great job.'”

Practice blowing bubbles and have them lay on their back in the bathtub to get them used to feeling of water in their ears. Offer praise when they conquer a fear, says Strauss.

With infants and young toddlers, a zero-depth pool is preferable because children feel more comfortable when they can sit or stand in the water and play, adds Brodsky.

Spencer tells parents if a child is fearful or becomes fearful, don’t remove him or her from the water because doing so will perpetuate that fear.

Show your child it’s OK to get water in his face. During bath time, instead of using a washcloth or something to cover his eye, teach him to close his eyes, says Spencer.

Most swim classes include water safety and parents should also teach their children to respect the rules. However, there is a balance between making kids aware of the dangers and not becoming overly fearful. “You don’t necessarily want to mention the word drowning to a child but you want to emphasize safety and give them the tools they need to keep themselves safe,” recommends Spencer.

To help encourage your child, download the Swim American Red Cross app to your iPhone or Android. This phone app is designed to keep kids motived by rewarding them with badges as they master swim skills. It also has games, videos and other swim-related activities.