Kids – and adults – can enjoy these lessons and camps at this Whitmore Lake spot. Learn more about the offerings here. 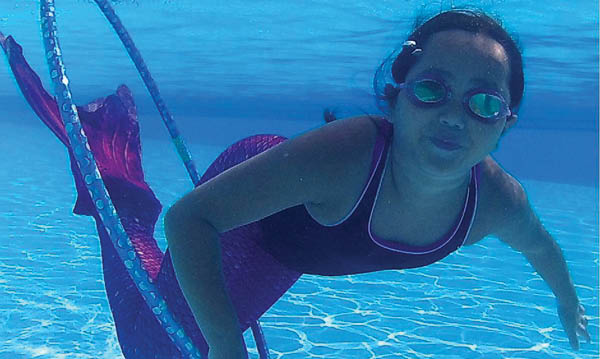 Natalie Nannoshi, 12, of Livonia has a high-tailing alter ego when she’s poolside. She helps teach mermaid finswimming lessons and camps at World of Swimming in Whitmore Lake – run by her mother Elena – as mermaid Natasha.

The entire operation started with Natalie’s fascination with the mythical creatures.

“I liked that (mermaids) could see a different world in the ocean, which is super cool to me,” she says. “If I was a real mermaid, I would like an aqua blue tail with a hint of green in it. I would spend my time looking in shipwrecks and visiting sea animals.”

After buying her daughter a mermaid tail she could slip into and wear in the pool, Elena noticed Natalie wasn’t the only one who took to it like a fish to water. She even saw swimmers using them at an international swimming camp. Thus came the idea to start a local finswimming program – for both adults and kids.

In her blue silicone tail, “Natasha” takes the lead on classes with younger students. She teaches swim and breathing techniques, the dolphin kick and how to swim with a monotail. And blowing mermaid kisses underwater, of course.

“It’s difficult at times, because when there’s a bunch of little kids around you, they kind of start jumping on you, like ‘Oh! It’s a mermaid!'” she says. “My favorite part about teaching is when the kids put on their tails and they get super excited.”

For Natalie, watching the mermaid tail she begged for turn into an enterprise has been incredible, because she’s helped kids from all over the country become stronger swimmers while living out a fantasy alongside her.

“It’s kind of like you’re free,” she says of finswimming. “I always feel so nice in the water.”