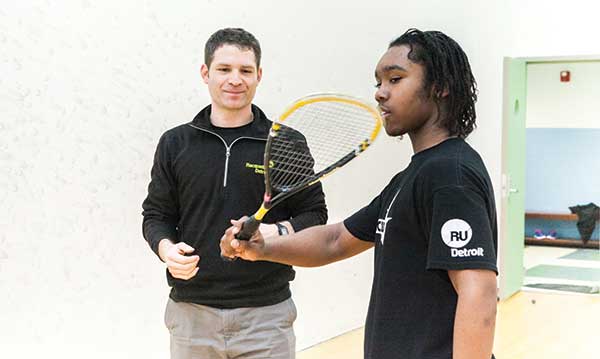 In the lower level of the Northwest Activities Center, kids on four courts compete in a game of squash by whacking a small, hollow rubber ball against the wall. On other courts, some kids are performing drills, running toward the far wall of the court and back before the sound of a beep. Down that hallway, in the opposite direction, there are classrooms full of students working on homework, reading and writing. This is a typical day for students in the Racquet Up Detroit program.

“I think every kid should have this kind of opportunity … this level of support … this level of exposure. Especially kids in the city, where there may not be resources for after-school programs,” says Derek Aguirre, Racquet Up Detroit executive director. “They may not have advocates or mentors who can expose them and help them navigate challenges in school and beyond.”

It’s a long-term commitment. Fifth and sixth graders are recruited from two nearby schools, Schulze Academy for Technology & The Arts and International Preparatory Academy at the MacDowell Campus (formerly MacDowell Elementary School). These students are required to attend Racquet Up about three hours a day, three days a week during the school year until they graduate high school. Students who started in the program in 2011 are now in eighth and ninth grade. Some of them participate in Best Path, where the older kids mentor the younger ones in squash and academics, two extra days out the week. The program currently has about 84 students, which is nearly its maximum, but Aguirre says there is room for a few more.

J’aMonte Patmon, a 15-year-old freshman at Renaissance High School, was recruited for the program while attending Schulze in the fifth grade. J’aMonte, who wants to be an engineer and build cars, had never heard of squash before the program.

“What attracted me was touring the world (for tournaments and college exposure), meeting new people, exercising – and actually the sport squash,” says J’aMonte, adding that Racquet Up helped him academically too. “At Schulze I was a 4.0 (GPA) student, and now since being at Renaissance, I’ve dropped like a little bit. But Racquet Up has helped me get back up there and get back to the grades I used to have.”

Although Aguirre doesn’t consider himself the founder of Racquet Up, rather attributing the birth of the program to “five founding board members and a group of really enthusiastic supporters in Detroit,” the program probably wouldn’t have made its way to Detroit without him.

Aguirre, who grew up in Standish, a small farming town in northern Michigan, says the idea started 20 years ago. While attending the University of Michigan and being a part of a group called The Detroit Partnership, which let students volunteer for nonprofits in Detroit, Aguirre fell in love with the city.

“There was something about the leadership of the nonprofits and the energy brought to the cause of trying to make things better in Detroit that really resonated with me,” says Aguirre. “So I started looking for that kind of work.”

The job he found that suited him was called SquashBusters, the first urban squash and education program – in Boston. Greg Zaff, a former professional squash player who was inducted into the U.S. Squash Hall of Fame class of 2009, was behind it. He wanted to introduce squash to kids in the city and combine that with academic support and mentoring.

Aguirre, who had known nothing about squash, was hired as the academic director, then became program director. Aguirre’s love of squash resulted in him becoming a certified coach during his fifth or sixth year at SquashBusters.

“I want to have an opportunity to lead an organization like this one day. I didn’t know what it would look like. I didn’t know it would be squash,” says Aguirre, who left SquashBusters in 2008 to attend Harvard Business School.

Aguirre says he met with Zaff regularly while in school and that Zaff supported the idea of him bringing an urban squash and education program to Detroit. It took about six months, after Aguirre graduated in June 2010, to build the board of directors for the program and fundraise before Racquet Up was launched in January 2011.

The program also expands student’s horizons thanks to the traveling required. Students participate in tournaments all over the United States and Canada including Boston, Chicago, Cleveland, Cincinnati, Toronto, Windsor, New York, Philadelphia, Palo Alto (California) and Kenyon College in Ohio. The program also offers college exposure. Students have gone to Michigan schools like Michigan State University and the University of Michigan but also out-of-state schools like Harvard, Princeton and Stanford. Aguirre makes sure his students know the ACT and SAT score required to get into these schools.

“We have three vehicles and we put a lot of miles on them. We fundraise,” says Aguirre.

Starnisha Ramsey, a ninth grader at the University YES Academy who wants to go to Stanford in hopes of becoming an entrepreneur, says her favorite part about the program is the traveling, because she gets to socialize with new people around the United States. Ramsey adds that she joined the program because boys and girls can play squash together, unlike most sports.

Every year, students participate in two to three community service projects and one to two cultural outings, like a performance at the Detroit Opera House or a visit to the Detroit Institute of Arts.

Aguirre cites many benefits to Racquet Up, like learning “a sport that will make them stand out amongst their peers.”

“Our sister programs across the country have helped students go to the best colleges in the country: Harvard, Columbia, Cornell – you name it,” Aguirre adds. “Personally, they are going to get a really strong consistent message about character, about being honest, about trying your hardest, about being good to other people, and about being dedicated.

“I’m still in touch with the kids I worked with in Boston who have now graduated from college, who are now on the board of governors of the organization I used to work at. I can see the other end of it. The long view. And I get really excited thinking about what’s going to happen for Starnisha and J’aMonte … 10 years from now. I just can’t wait to see it.”

Greatest achievement: “Helping to start Racquet Up. Seeing the kids and their families loving the program and getting a lot out of it, that was exactly what I was hoping to do with my life.”

Advice for parents: “Get your kids to try things that may be a little uncomfortable – to develop a comfort with challenges and new things and new places, new people, new experiences.”

Advice for students: “Have an open mind and be willing to try things that the people next to you may call lame or boring or stupid, because they are probably closed minded. Ultimately, your gut will tell you in the moment if there is something intriguing about it.”

Wish for the future of education: “I would hope that every kid, no matter where they live, has great learning opportunities in whatever form those take.”