Team Sports for Kids: Getting Started and Keeping Perspective

A guide to help parents decide the right age to begin, whether to sign up for a recreational or competitive travel team, how to avoid burnout - and more. 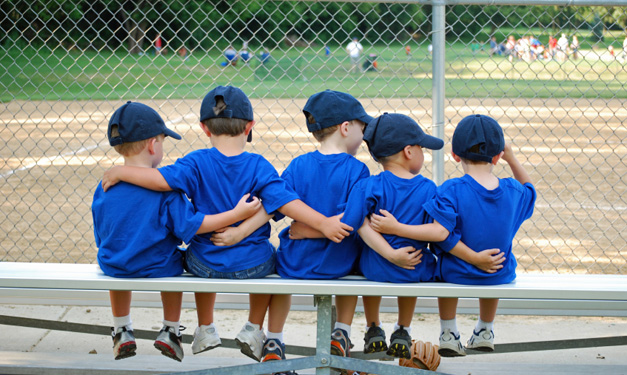 Soccer, baseball, basketball and a bevy of other team sports can be fun, fulfilling parts of childhood. But knowing when – and how much – kids should dive in can be a challenge for parents. Depending on organization, expectations for commitment and performance can be high. And some moms and dads grapple with the pressure, real or perceived, for their kids to excel in one sport at an ever-younger age.

So how do you decide if – and when – you should enroll your children in a community team or sign them up for a premier league? While each child and each circumstance is different, there are some general guidelines to consider when signing your child up for any team.

Sports programs are offered for kids early on – you can even find introductory classes for toddlers. As long as they’re focused on tykes having fun and developing skills, it can be a great opportunity, says Liz Jones, a physical education teacher at Boulan Park Middle School in Troy.

“When children are young, they should be involved in as many different sports as possible,” says Jones, who herself played soccer and softball as a kid. “That way they will learn a variety of skills, and they’ll learn which sports they enjoy.”

Rob Gotlin, a New York City dad of three and author of Dr. Rob’s Guide to Raising Fit Kids, agrees. He believes putting too much pressure on children to be competitive at young ages is setting them up for failure.

“Younger children have an attention span of about 30 seconds,” Gotlin explains, which makes focusing at games and practices difficult. “A child doesn’t even fully understand the idea of competition until they are older – say 7, 8 and 9.”

Also, Gotlin warns there are medical risks associated with kids who are working their bodies – and muscles – too much, too soon.

Both Gotlin and Jones say concentrating on one sport – and participating in a competitive team – shouldn’t be considered until a child is around 10, the so-called “double digits” era of childhood.

There are definitely exceptions to that rule, however. For example, if parents are both involved in a sport, say martial arts, perhaps their child grew up participating and can handle more intense workouts than similarly aged peers.

But for most children, experts advise holding off on more competitive team situations until at least middle school.

Different sports teams have different focuses and expectations of their young athletes – and their parents.

Novak coordinates teams and then sets up practices and games at area schools and churches. He draws coaches from the community and parents. These coaches go through a training program (and a background check), so that they understand i9 Sports’ approach: that kids should have a positive experience as they participate.

Coaches are encouraged to let every child play at least 50 percent of the time during games – and get a chance at every position. They also learn that the goal is to have fun and become fit, not on winning or losing games.

“We are a recreational program, as opposed to a super-competitive program,” explains Novak, who says i9 Sports’ approach is akin to what you might see at a YMCA.

Find similar recreational and fun-focused programs in your own neighborhood through your school, church, Y and similar groups. Expect your child to have one practice a week, directed by a volunteer coach, and weekly games.

More competitive programs, often called “travel teams,” help kids who want to become more skilled in a particular sport – and who have the drive to have more frequent and intense practices.

Joel Dragan, program administrator at the Michigan State Premier Soccer League, coordinates such teams. He explains that coaches in these leagues are more “career coaches” with various certifications that qualify them to instruct players. Teams are put together through a careful selection process and, often, tryouts; they also may become members of state associations. Then, based on the team’s skill level, it can enroll in a premier league.

“We really have the upper echelon when it comes to players and teams,” Dragan says. Practices are frequent and game matchups determined by skill level, not location. So a team in the premier league plays against other premier teams – whether they’re in Plymouth, Traverse City or anywhere between.

Hence, parents are expected to shuttle kids to and from practices; on weekends, teams often travel and stay overnight at hotels before game day. Travel teams can put a great deal of pressure on kids to perform well and parents to provide the rides – and cash – to take their children to practices and faraway games.

Still, for children who really enjoy a sport and become bored on a recreational squad, this can be a good option.

Novak himself occasionally sees players who are “way above average for their age.” In one case, after just a week of drills and scrimmages, he approached two such players and suggested a more competitive league. He refunded their fees and recommended other area teams that might provide more of a challenge.

When it comes to deciding what kind of team best matches your child’s interest and abilities, the first step is to sit down and talk it through together.

Keep in mind: Your child may not be entirely honest about her desires. Cautions Gotlin, “Sometimes, kids just say ‘yes’ to everything because they either don’t want to disappoint their parents or their coaches or their friends.”

Remember, the key for younger children is to try a variety, so they can stay physically active and figure out which sport (or sports!) they like best. If you’ve got a real sports enthusiast, Gotlin says, sign him or her up for no more than two recreational sports per season – but never more than one competitive team per season. Strive to ensure that your child has off-season time too, he adds.

Jones recalls that, as a kid, she bounced from one sport to another based on the season. She laments that “now, many kids play the same sport all year long.” Focusing on just one sport may help your child develop certain skills, but it can also lead to burnout. Just because a child gets an early start in a certain sport doesn’t guarantee a competitive edge over his peers, Jones notes.

Of starting kids early in competitive sports, she adds, “I don’t really think it’s necessary. I’ve known kids who hadn’t played a certain sport until middle school and then went on to play in high school and even get college scholarships.”

Drawing from her own experience, Jones says she never played on a travel team, but still went on to become a collegiate athlete.

No matter how much playtime your child has, it’s tempting to envision him or her as the next Chauncey Billups or Mia Hamm. But if you’re driving your child to endless practices in the hopes of a future career as a sports professional – or even a college scholarship – you may want to rethink that plan.

“Too many parents and too many coaches think that every kid is going to get an athletic scholarship,” Jones says, “and it just doesn’t work that way.”

Gotlin advises caution, too: “The average transition into collegiate and professional sports from the youth level is a fraction of a percentage point.”

That means less than 1 percent of the kids you see on the field – no matter how strong their kicks, throws and passes – aren’t destined to play in college.