The Benefits of Infant Swim Lessons for Babies

Infant swim lessons provide a jumpstart on important safety skills and a bonding opportunity for parents and their babies. 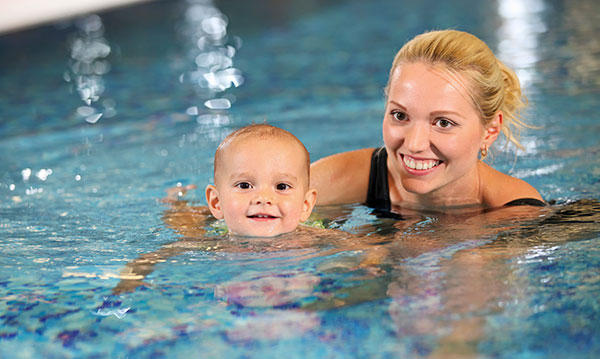 Swimming lessons for babies are an increasingly popular choice among today’s parents. While the idea of infant swim lessons is at times a source of debate, many moms and dads are seeking out infant swimming programs for safety reasons, a fun bonding activity and to provide early exposure to a lifelong sport.

Jenny McCuiston, co-founder of Goldfish Swim School, says babies as young as 4 months old can start infant swim lessons at Goldfish. At this age, little ones are in the heated pool with a parent or caregiver and enjoying skin-to-skin contact, songs and a gentle introduction to the water.

“They are just kind of getting used to the water at first, learning to be comfortable in it, and a lot of bonding with the parents,” she says.

As babies become more comfortable, classes incorporate early skills like tummy time, going under the water and back floating – along with plenty of games.

“Babies automatically learn how to close their mouths usually and not swallow water,” McCuiston says. “People think it’s a scary thing to put a baby under water but it’s really a natural thing – typically they’re very comfortable in the water and going under water.”

Like any other activity or skill, the earlier children are introduced to it the better, she says.

“When you start at an early age they’re really going to build on those skills. It’s second nature to them,” she says, pointing out that interest in infant swimming lessons is growing. “People are realizing what an important skill it is.”

Many children who take early swim lessons develop a love for the sport and go on to compete on swim teams, but the benefits of infant swim lessons apply to all families.

“Even if you don’t have these lifelong goals of them being a swimmer someday, I think it’s a great bonding experience for babies and parents,” she says.

The swimming lessons for babies offered at Goldfish focus on positive early swim experiences and have a gradual learning pace.

“We kind of take the approach that this is a lifelong skill and we want them to learn it at a gradual approach,” McCuiston says. Whatever the teaching method, though, parents should know that lessons don’t replace supervision.

“I don’t think swim lessons ever take the place of parents watching them at the pool,” she says.

Another popular method of infant swimming lessons is Infant Swimming Resource‘s Self-Rescue program. These classes teach children how to save themselves if they fall in the water, says Anna Anderson, a certified ISR instructor and the owner of ISR Great Lakes.

“We teach Self-Rescue swimming lessons for infants and young children from 6 months to 6 years of age,” she says.

The youngest students – ages 6-18 months – are taught to “hold their breath under water and then rotate over to their back, and then rest and breathe – with no assistance, no flotation device, no one holding them up – until an adult can rescue them,” Anderson explains.

Toddlers and older kids in ISR classes learn how to swim underwater while holding their breath and keeping their eyes open, use their arms and legs to propel themselves forward, and utilize the “swim, float, swim” method until they get to the shoreline or pool ladder or until someone can rescue them.

“If they’re unable to swim their way out then they are taught to maintain that back float until someone can rescue them,” says Anderson, who teaches ISR classes at the Troy Community Center and Sola Life and Fitness in Rochester Hills.

Unlike parent-child swimming lessons for babies, infants in the ISR program work one-on-one with the instructor in the water while the parent sits poolside. Students attend classes daily during the program, with each lesson taking no more than 10 minutes.

“The average child takes about six weeks to learn it,” she says.

The classes are especially popular among families who live on lakefront property and among those with a pool at home or at a grandparent’s house. While the program focuses on survival skills, the lessons also serve as a foundation for traditional stroke work classes in the future.

“It’s a survival method but it also is a really a foundation for the appropriate swimming postures,” Anderson says.

Parents should be prepared that their baby may cry at first during lessons.

“I’m asking them to do things that they’ve most likely never done before. It’s hard work, it’s physical. The first two weeks, the child will fuss or cry,” Anderson says. “It varies based upon their temperament. Usually after that two-week mark they start to calm down, get to know me, and they actually become very proud of themselves.”

And that confidence is one of the major benefits, she says.

“Water can be very dangerous but it can also be really fun as a family activity. (The ISR program) gives each child a foundation to enjoy the water because they have the competence and the confidence,” Anderson says. “My hope and prayer is they would never need to use their skills in a potential drowning situation but I want them to be prepared should that need ever arise.”