Using the Olympics to Boost Kids’ Interest in Sports

The Olympics in Rio are inspiring young athletes and couch potatoes alike. Here's how to use the sporting event as a springboard to help kids stay fit. 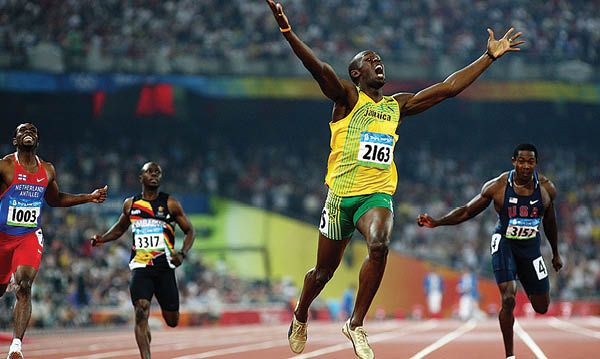 Every four years, our family members becomes overnight experts in everything from rugby and rowing to weightlifting and water polo. Thanks to the Olympics – and all the TV and web coverage – we’ll once again have ringside seats Aug. 5-21, 2016 as the games grab the global spotlight in Rio de Janeiro, Brazil. It’s fun to hear athletes’ inspiring stories and the commentators, who explain the ins and outs of each sport. (Who knew there were real strategies behind ping-pong?! Err, table tennis.)

While watching is great, why not use the Olympics to spur your kids to develop their own physical skills? Sure, only a handful of kids grow up to be Olympians, but the real reward is starting kids on a lifelong path of staying fit and active.

Tap into that Olympic spirit – and determine whether one of the Summer Games’ most popular sports may be a good fit for your kids.

Why it’s a favorite

Soccer takes very little equipment to play and involves very fundamental principles – you try to kick a ball into a net, and the other team tries to stop you. It doesn’t get much simpler than that. For this reason, soccer is one of the first sports available to kids. So far, soccer hasn’t taken off in the U.S. like elsewhere in the world, but you wouldn’t guess that from the high number of kids on teams across the country and right here in Michigan.

Preschoolers can start playing rec ball at the YMCA, explains Matthew Humenay, youth/family director of the Birmingham Family YMCA and youth sports coordinator for the metro Detroit Y. They’ll learn basic ball handling skills and participate on teams. These skills become increasingly difficult as they get older. Humenay says one way to encourage kids’ success on the field is to “make sure you practice with your child and stay engaged during practices and games. Your child knows if you are watching!”

Children develop eye-hand coordination along with agility and overall coordination. Equally important, they learn decision making on the fly – along with spatial relations. For example, how you kick that soccer ball affects its trajectory. They have to think through who to pass the ball to and when in order to advance the ball on the field and make a goal, along with tracking the distance needed.

Parents may recall the tiny big-smiled gymnast who, in the 1984 Olympics, scored perfect 10s on the floor exercise and vault, despite a recent injury. Mary Lou Retton was the first American to win gold for the individual all-around, spurring a U.S. obsession with the sport. Other firsts, like three-time Olympian Dominique Margaux Dawes, the first African-American to medal in gymnastics, sealed the deal.

Children as young as 1 can take classes at Troy Gymnastics, says owner and operator Toby Buechner – they have over 100 registered here. The parent-child class goes over basic gym skills and is more about kids developing fine motor skills than becoming premiere gymnasts. From there, additional intro preschool classes are available; as kids get older, they can join the gymnastics team. Other local programs follow a similar structure.

“Gymnastics builds muscle, flexibility, balance and more,” Buechner says. It’s an amazing core and strength workout, too, without a weight in sight. Instead, kids use their body weight as resistance. Besides physical skills and a boost in self-confidence, Buechner adds, “Gymnastics is one of the larger work-ethic sports.” Patience and persistence pay off.

Almost everyone at some point picks up a volleyball to play at an outdoor picnic or in a rec center. The fast-moving game has simple rules and requires only a few pieces of equipment. Paul Drdul, head coach at Great Lakes Volleyball Club in Utica, which has about 150 athletes, explains: “Volleyball is exciting to watch, there’s always something happening – the serve is fast, the scoring is fast. You can sit at a baseball game for hours without much happening, but in volleyball there’s constant scoring and constant action.”

Most kids get their first exposure to volleyball in gym class and later might join a recreation league or their school’s team – which for most starts in middle school. Drdul says parents can find summer camps and other programs for children as young as third grade. But if your child has enjoyed watching volleyball in the Olympics, it’s a snap to develop some basic skills at home. “You can even use a balloon and pass it back and forth,” Drdul says. If you do buy a volleyball, he encourages softer starter balls that are easier for kids to use.

“Volleyball builds hand-and-eye coordination skills,” Drdul says. On teams, kids need to communicate and work together to score. They strategize to figure out where to try to position the ball so the other player or team can’t hit it back. It can offer a crash course – literally – in making and learning from mistakes quickly. Another big benefit? “It’s a lifelong sport. You can play it when you’re 5 and continue until you’re 80. Whether you’re playing it in the backyard or in the sand on the beach, it’s something you can always do, unlike other sports.”

Of all the Olympic sports, track and field has some of the most ancient games: discus, javelin, hammer throw, running. U.S. greats like Jesse Owens, Carl Lewis and Jackie Joyner-Kersee have cemented these feats as must-watch TV. For kids, it’s appealing since it’s easy – most events require your own two feet and a will to run fast or jump far (or high, or both).

There are several track clubs in southeast Michigan. Still, it’s not as popular as kids’ sport behemoths like soccer. Gordie McIntosh, head coach of girls track and field at Divine Child High School in Dearborn, helped create the Dearborn Track Club six years ago to offer kids a place to participate and train. The program, offered primarily in summer, began with around 20 kids and now numbers over 120. “We have some as young as 5,” says McIntosh, who notes many of these athletes go on to excel in school track and field, which can lead to college scholarships. “Some people think it’s just running,” he adds, “but there are so many other events, like throwing and jumping, too.”

For a strong overall athlete, track and field has it all. Kids usually participate in running drills, which improve cardio, and other exercises to tone and build muscles. It’s a good crossover sport for athletes, too. “It’s not unusual for us to have an athlete enroll in track and field to improve their running speed for other sports, like baseball,” McIntosh says.

Two words – Michael Phelps. The University of Michigan swimmer whose record now includes a whopping 22 medals, more than any other Olympian in history, has made swimming the event to watch. Add to that, summer swim teams and recreational classes are plentiful, so it’s easy for families to find a place for kids to learn strokes and compete.

“Children can start swimming at 6 months – the sooner you get them in the water, the better,” says Humenay. Kids tend to love swimming “because it is fun, it is different and because we live in Michigan, which is surrounded by water.” Look for classes at a local YMCA or rec center. For older kids, consider school swim teams – or a USA Swimming Club Team like Wolverine Club in Ann Arbor, which is parent-run. “The best teachers and coaches usually gravitate to these programs, and you can decide your family’s commitment level,” says its head coach, Gunnar Schmidt. “It doesn’t matter which program or age you start with. Just get them in the water.”

“Swimming is one of the best exercises out there,” Schmidt adds. “It is a full-body cardio workout.” Yet it’s easy on the joints. Alternate between swimming and land sports to give kids’ bodies a break from high-impact exercise like running or basketball. It also builds up physical endurance. Another primo perk: Swim skills can help save their lives. While no child should be left unsupervised in the pool, being able to swim helps cut a child’s risk of drowning.

Medals and global athletic prowess are lofty goals. And, of course, not every young athlete goes on to be a Michael Phelps or Serena Williams.

As Olympic historian Bill Mallon put it when talking to a reporter at Horsetalk during the 2012 games in London: “There are about 10,000 athletes in the summer Olympics. With the world population at about 7 billion, the chances of making it that far are about 1 in 562,400.”

Closer to home, Toby Buechner of Troy Gymnastics says, “There are 350 gymnastic facilities in Michigan and 50 states. The gyms average 500 kids. Only five women and five men make it to the Olympic team.”

Still, Phelps notes in his biography that watching swimming events during the 1996 Summer Games first sparked him to pursue Olympic glory of his own.

Former Rochester High School student athlete Lauren Reedy was also inspired by watching the Olympics to push herself to train for the team. The hockey player told the Detroit Free Press she switched her focus from the ice to diving after seeing it on TV during the 2008 games, when she was in high school. Reedy barely missed out this time, coming in fourth place in the Olympic trials for the women’s three-meter springboard competition. Only the top female athlete advances to Rio.

See the Summer Olympics from opening to closing ceremonies, with plenty of medals in between, Aug. 5-21 on NBC affiliate WDIV Local 4 at clickondetroit.com/Olympics.

No need to carve your pumpkin this Halloween. Here are some fun no-carve pumpkin ideas to try with your kids.
Read more
Sponsored Content