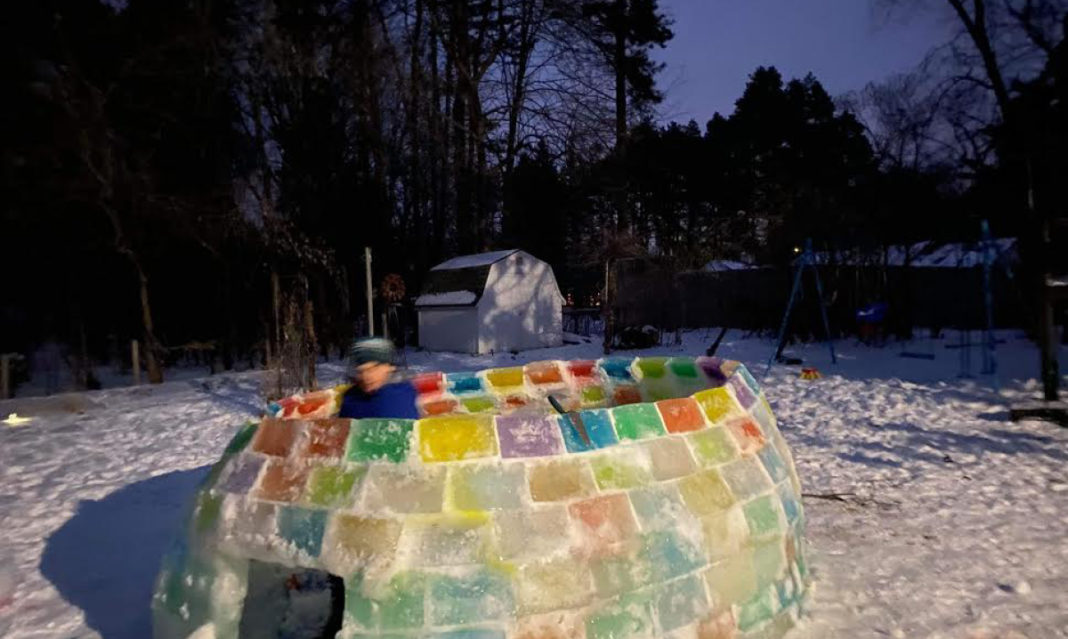 The world could always use a bit more kindness. It’s a mantra that Washington Township mom Stephanie Newman raises her family by — and it was the driving force behind the family’s Rainbow Igloo of Kindness, which helped to raise spirits this past winter during the coronavirus pandemic. “If you know me at all, you know that I’m always looking for something to do. The winter was getting super long and my kids were getting bored with rolling snowballs and making snowmen,” Newman says. So, “we looked online and we decided to make a rainbow igloo.”

The family did a lot of research and consulted with Newman’s engineer friend to make sure the igloo would be safe for her kids to play in. In the end, they decided on building the igloo out of ice, rather than snow.

“We got those 6-quart shoe storage containers, filled them with water and food coloring, froze each of them for 36 hours and we rotated them (periodically),” Newman explains. “Once they were frozen, we laid them together with ‘snowcrete,’ which is water and snow mixed together,” It took about eight solid days of hard work — about 45 hours of labor — with the help of her wife, two kids and sister for the 6-foot-tall and 12-feet-around ice structure to be complete.

“My sister moved in for 10 days, and then my son, who is 4, was like a little work horse while my daughter (10) watched from afar and decided what colors to use,” Newman adds.

Once standing, the igloo quickly became the centerpiece of Newman’s backyard. Her son really enjoyed playing in and around the igloo with his friends and her family spent a lot of time outdoors together doing igloo-centered activities. “We created a track around the igloo to sled around it and it was the focal point to keep us in the yard,” Newman adds. “We were out there two to three hours at a time and it was so fun for our family.”

What she didn’t expect, though, was for her igloo to go viral and for other families to get so much joy out of it, too.

The Rainbow Igloo of Kindness

The popularity of Newman’s igloo started innocently enough with a shout out from The Peacock Room in Detroit and post on the Rainbows Over Michigan Facebook group, which was created at the beginning of the pandemic when people were making rainbows and hanging them in their front windows as a way to spread kindness.

Then, The Weather Channel picked up the story and suddenly, she had complete strangers from as far away as Mount Pleasant reaching out and asking to come see the igloo.

“My daughter came up with the idea to trade a random act of kindness to come see it, so people would shovel their neighbors’ walks, donate to Detroit Dog Rescue (which is where the family has adopted dogs), write letters to nursing homes and they’d come see it,” Newman explains. “We’d have people over (in face masks) every half an hour for five days straight. It was a really cool thing.”

Now that the weather has started to get warmer, the igloo is beginning to melt and the structure is no longer safe for anyone to be in, so the hype has largely died down.

Newman is unsure if she’s going to do another igloo next winter or if she’ll try something new — maybe ice sun catchers — but she and her family will always hold on to the lessons that the igloo taught them during a winter like no other. “During the pandemic it was important to see that real life can go on and getting to talk to these different people was just so joyful,” she says. The igloo “taught me not to downgrade your effort. It may just be an igloo but it became a beacon of joy during this dark time (and) I hope it inspires people to be kind to each other.”

For more stories about people helping people during COVID, check out our Helper’s Series at MetroParent.com.