Benefits of Eating Fruit While Pregnant

It boosts baby's cognitive development, a recent study says. But should you up your intake? 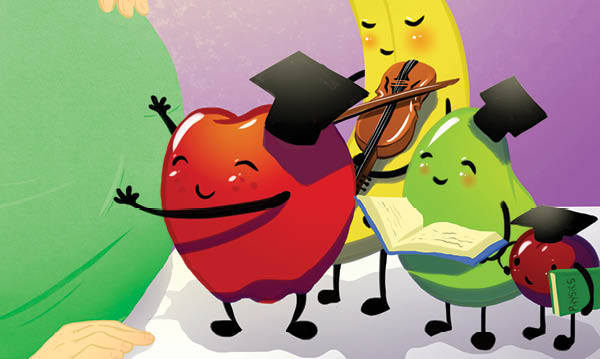 Is fruit among your pregnancy cravings? Good news. A study recently published in EBioMedicine found moms-to-be who consumed more fruit – six to seven daily servings, it notes – had children who performed higher on developmental testing at 1 year old. Each serving resulted in a 2.38-point increase in baby’s cognitive development, researchers said.

Before you reach for that extra peach, though, there are things to remember about fruit intake – and your overall diet during pregnancy.

Samantha Linden, a registered dietitian nutritionist and owner of Nutrition-in-Balance, has some advice.

While it’s safe for many pregnant women to eat this much fruit daily, “for some women with gestational diabetes, this amount of fruit can be dangerous,” Linden says. This issue causes high blood sugar during pregnancy and affects how your body uses the glucose it gets from food. In these cases, only eat one to three servings daily.

Linden also cautions moms to remember what a portion size actually is.

“The giant apples you find at the grocery store these days are often two to three servings and not one. A serving of fruit, for example, is generally one small apple or eight strawberries – not a container of strawberries.”

Even if you don’t have gestational diabetes, Linden suggests keeping your fruit intake to one to three servings, as opposed to the six to seven noted in the study, to ensure you’re eating other foods, too. Make sure you’re getting enough protein, carbs and fat to help your body grow a healthy baby.

During pregnancy, Linden says, women and their unborn children are more likely to become ill from food poisoning – and, because their immune system is compromised, it is harder to fight off foodborne illness. This can “cause serious health problems including possible miscarriage, premature death or stillbirth,” she says. Avoid the following:

A common myth is to avoid fish entirely. Not true, Linden says. “In general, some low-mercury fish include shrimp, salmon and chunk light tuna. Enjoy up to 12 ounces per week and fuel your baby’s brainpower.”

Vegetarian or vegan? Get omega-3s from chia and flax seeds, nuts and vegetable oils.

While the list of no-nos is long, there are many things moms-to-be should eat daily. Your need for iron doubles, so be sure to eat chicken, eggs and fish. Plant-based diet followers can get iron from Brussels sprouts, leafy greens, raisins and prunes, she says. Your calcium intake, which benefits baby’s teeth and bones, should be 1,000-1,200 milligrams daily. Hydrating is important, too. Drink 70 to 80 ounces of water per day.

And remember: Just because you’re pregnant doesn’t mean you should double your calorie intake, Linden says. “Extra calories are not needed during the first trimester, because the size of the baby is still very small and little weight gain is expected.”

And remember, an overall balanced diet is key. “All the different foods play a role in your overall health and the health of your baby.”