During pregnancy, some moms experience this rare yet intense condition, which has severe and unrelenting symptoms. When should you be concerned? 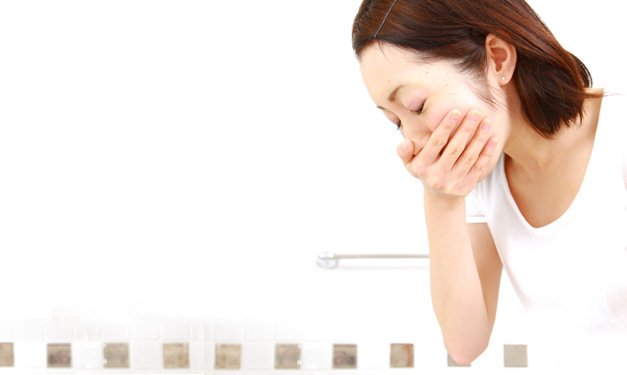 Hyperemesis gravidarum – or HG, as it is commonly called by those familiar with the condition – is a potentially life-threatening pregnancy condition marked by debilitating and unrelenting nausea and/or vomiting, dehydration, malnutrition and weight loss.

For HG patients, the first hurdle in receiving the proper treatment to aid in a healthy pregnancy often is getting past their own preconceived notions of morning sickness and what is considered “normal.”

Morning sickness, or vomiting and nausea during pregnancy, typically begins at about six to eight weeks and peaks at about 9 to 11 weeks. Not every pregnant woman gets morning sickness, but for those that do, symptoms usually resolve by 15 weeks. Sometimes, however, the symptoms continue for the duration of the pregnancy.

Detroit mom Veronica Valentin relied on Saltine crackers, pop and lemon and salt packets commonly found in Hispanic food markets to settle her sensitive stomach during two of her pregnancies. She dealt with occasional morning sickness symptoms typically associated with the early weeks of pregnancy.

“It started right away – I mean, even before I knew I was pregnant – and it ended at about three months with Nicolas. With Caleb, I only had it about two months,” she says.

Between 5 to 10 percent of women may suffer from HG, according to HER Foundation (Hyperemesis Education and Research). However, it’s tricky to pin down the exact percent, says Kimber MacGibbon, a registered nurse with the Virginia-based grassroots foundation. HER’s estimate is based on the number of women it finds aren’t diagnosed or treated correctly – and those who don’t visit a doctor.

“About half of all women are not hospitalized,” notes MacGibbon, adding that newer stats report about 300,000 annual hospital discharges due to HG (inpatient and outpatient). “Most women only have one hospitalization.

It most commonly happens in the first trimester and may resolve by 21 weeks. Less than half of women with HG will deal with the condition up until the birth of their children, HER Foundation notes.

“The usual way that I tell patients is that if the nausea and vomiting is severe enough that they can’t do the activities of daily living, that’s when it’s not normal,” says Dr. David Bryant, an OB/GYN certified in maternal and fetal medicine at DMC Hutzel Women’s Hospital in Detroit.

“I started having morning sickness at about six weeks, and I was sick morning and night. I called the doctor and they told me go to the hospital because I couldn’t keep anything down,” Zook recalls. “They diagnosed me with hyperemesis right away. I thought it was just morning sickness. I didn’t know there was a difference.

“With regular morning sickness, you feel better after you throw up. It’s like a relief that it happened,” Zook says, who since had another child – and fortunately, in that case, no repeat of HG. “With hyperemesis I never felt better; I just felt miserable all the time.”

Although there are no known causes, research shows the condition can possibly be genetic. So if a female relative had severe morning sickness, it’s recommended that you bring it to your physician’s attention, just to be on the safe side.

“The important thing is that support people of pregnant women need to try and understand that most women with this symptom aren’t exaggerating – and they aren’t crazy,” Bryant says. “They really are suffering, and they need as much support and empathy they can get.”

In some cases, prescription medication may be necessary. Fortunately, a generic version of that medication, Zofran, is now available as a generic, called Ondansetron, for about $1 per pill – pre-insurance, notes MacGibbon with HER Foundation (moms may need multiple pills per day; the pills were previously as much as $30).

Without proper treatment, a woman may end up in the hospital with symptoms of dehydration, which can result in a possible life-threatening electrolyte imbalance.

Severely affected women may lose up to 20 percent of their body weight and, in the most extreme cases, feeding tubes and intravenous nutrition are required. (HER Foundation notes that “home IV care,” which supplies continuous essential fluids to prevent dehydration, often covered by insurance, too.)

“Women will tolerate just about anything, but the nausea is just about the worst thing,” Bryant says. “It is very comparable to the nausea patients experience in chemotherapy, and it is very debilitating.”

Zook knows this firsthand. After following a special menu and being prescribed medicine, her symptoms returned. In the end, she had to take time off from her job as a retail assistant manager, so she could stay home in bed when the symptoms were at their worst.

But the constant nausea and vomiting were soon forgotten once she held her daughter, Brigette, in her arms.

“It’s a real thing that happens, and you have to just know that even if you think it is bad at the time, what you get at the end is well worth it. And you forget about the sickness,” she says. “All that matters is that you get to bring your baby home in the end.”