While the national abortion rate has declined, Detroit's rate for terminating pregnancies is 31 percent. What factors could be contributing to the rate? 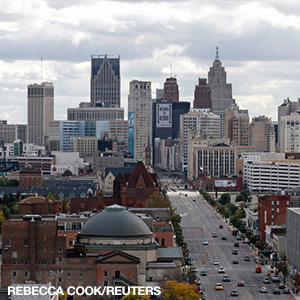 In the city of Detroit, statistics show that about one-third of pregnancies are aborted, the Detroit News recently reported.

Calculated based on the 2012 figures, which are the most recent numbers released by the Michigan Department of Community Health, 31 percent of Detroit’s approximate 18,360 pregnancies were ended by abortion.

“We’re seeing a picture that looks more like some Third World country than someplace in the United States,” Dr. Susan Schooley, chairwoman of the Department of Family Medicine at Henry Ford Hospital, told the Detroit News.

In fact, the number of abortions in Detroit by total population is 37.9 per 1,000 women ages 15-44 years old, which is three times the Michigan rate, according to the Detroit News. It’s also surprising considering the abortion rate in the United States was reported earlier this year to have reached its lowest point since 1973, the year abortion was legalized in all 50 states, the Washington Post reported. The national rate in 2011 was 17 per 1,000 women.

The Guttmacher Institute found in 2008 that 42 percent of women who had abortions were low-income, making 100 percent below the federal poverty level. Poverty level could have something to do with the high numbers in Detroit, as experts pointed out to the Detroit News. The Detroit News also noted that funding in Michigan for family planning services and contraceptives has decreased from more than $5 million in 2006 to $692,300 in 2013, with the number of people receiving free family-planning services dropping by approximately 80,000 between those years.

“I think that most people would agree that with very few exceptions, people would prefer to prevent an unwanted pregnancy than to make the difficult decision to end a pregnancy with abortion,” says Loretta Davis, president and CEO of the Institute for Population Health in Detroit, which offers family planning as well as other health services.

Davis says family planning services, through birth control methods – like pills, IUDs or inserts – and abstinence, is “just the way to go.” But, she emphasizes, it needs to be affordable and easy to access, and people need to know where to go.

A study published in Obstetrics & Gynecology in 2012 found that abortion rates dropped drastically when women had access to free birth control.

IPH has two locations in Detroit – a North End Center at 8904 Woodward Ave., and a Northeast Center at 5400 W. Seven Mile Road, where women and men 13 and older can receive family planning services. Birth control is also offered. Those seeking the services can make an appointment – or the centers take walk-ins. Major insurances, including Medicaid, are accepted, and other arrangements can be made should somebody not have insurance, Davis says.

While education about sex and reproduction needs to start early, it’s also important for the community to “support women in their decision to use highly effective birth control methods,” Davis says.

“The whole conversation around family planning, even in this day and age, I think sometimes can get very charged,” she notes. That’s why she suggests “a cool-headed discussion” about unprotected sex and the likelihood of getting pregnancy that starts in safe, community places, and among family and friends.

Davis says just like rates have gone up and down in the past, “I believe there can be a turn around.” She predicts that might be when prospects start to look up in the city as far as employment opportunities, schools and public safety, “and people start to feel a stronger sense of hope and vision for their lives.”

“It will support people’s decisions to not get pregnant until they feel that they’re ready for that,” she explains, noting that “social determinants” like the health choices of those you’re around and setting goals for the future tend to lead to living healthier lifestyles.

“Choosing when one becomes pregnant is another one of those issues I believe really needs the support of all aspects of our community.”