Pregnancy Cravings and Why Women Have Them

Why do pickles and ice cream make such a wonderful combo to moms to be? Experts dish on the science and reasons behind these oddball pregnancy cravings. 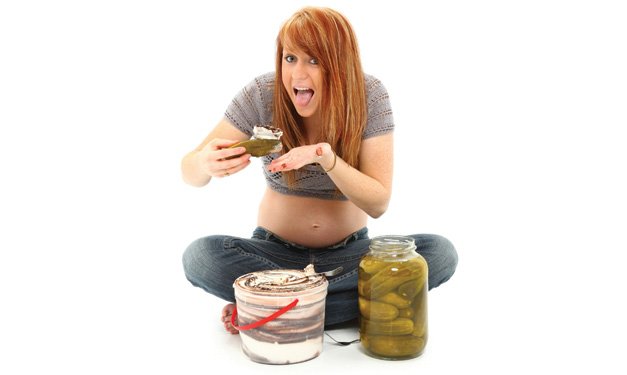 Sarah Zammit, of Allen Park at the time of this interview, says she experienced pregnancy cravings for chicken enchiladas before she even knew she was pregnant with her daughter Olivia.

Further into her pregnancy, she craved Good ‘N Plenty candy and baby watermelons.

“I’d cut (the watermelon) in half, and I’d stick them in a cereal bowl and just eat it with a spoon … kind of like a grapefruit,” she says. “I probably went through maybe three watermelons a week, and I’d compensate with the Good ‘N Plenty. They were my on-the-go snack, whereas watermelon was my home snack.”

Whether it’s some metro Detroit pickles and ice cream or watermelon and Good ‘N Plenty, kooky food pairings and cravings are par for the course for many expectant moms.

What’s up with the cravings?

Dr. William Jewell Jr., an OB/GYN at Associated Obstetrics and Gynecology in Clarkston, says doctors aren’t exactly sure why that is.

“There are certain areas of the brain that stimulate cravings and impulses and pleasure centers,” he says, so something about being pregnant must trigger some of these impulses. Sometimes foods that women enjoyed pre-pregnancy repulse them during pregnancy. On the other hand, foods that never interested them before pregnancy are now their latest obsession.

Prior to pregnancy, Zammit says, she enjoyed eating Good ‘N Plenty, but she’d “never go out of the way to buy them.” Although she had always liked watermelon, she says she felt a stronger urge to eat it while pregnant.

Post-pregnancy, she doesn’t crave either of those things. “I probably haven’t had Good ‘N Plenty’s since after Olivia was born. … It was just like the urge was turned off. It was really weird.”

Not a big deal, on the whole

Jewell says the cravings tend to be on the “nutritionally bad side.” The most common ones he says he sees in his patients? Fast food – particularly French fries. The strangest one? Rice Krispies and ketchup.

Having a craving once or twice a week, Jewell says, is fine as long as women offset unhealthy food cravings by making other healthy food choices. Seeking a craving every single day, though, can throw a woman’s nutritional balance out of whack and be detrimental to her health. Jewell says women also need to be careful to not indulge cravings for foods that could be detrimental to a pregnancy, such as certain types of fish that contain high levels of mercury.

“In all, most cravings are not detrimental. If done in moderation – (as) with anything else in pregnancy – then the chance of (them) being harmful is very little,” he says.

Jewell has also seen patients come up with innovative ways to satisfy their cravings without compromising their health.

One of his vegetarian patients craved cheeseburgers during her pregnancy. To solve the conundrum, her husband went to a fast food restaurant and ordered her cheeseburgers without the burger.

Jewell says he has seen cases where the same woman will crave different foods during different pregnancies.

During Zammit’s pregnancy with her daughter Emma, she says, she didn’t really experience food cravings at all. However, both times she was pregnant, she experienced some food aversion.

“Certain ways that chicken was prepared, for both of them, made me nauseous,” she says. “If it had marinara sauce, forget it – that’s disgusting.”