For those considering natural childbirth at a southeast Michigan birth center, there are unique features to make the experience as pleasant as possible. 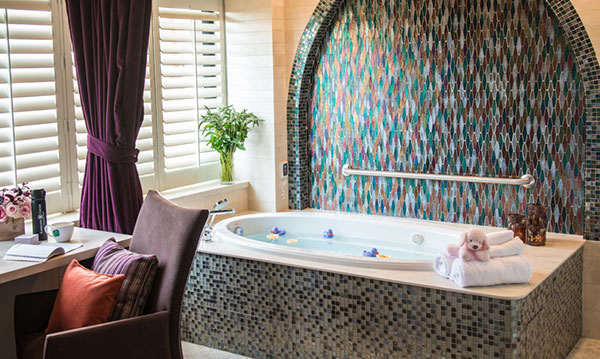 A wooden pole isn’t something that comes to mind when thinking about childbirth, unless you are Amber Walters, a Clinton Township mother of one with another baby due in January.

Walters gave birth to her daughter at the St. John Providence Hospital Alternative Birth Center in Southfield. The center offers a home-like setting for delivering babies without the use of medication for induction or pain relief. Women are supported by midwives and encouraged to follow their instincts in labor.

For Walters, that meant squatting on the room’s queen-sized bed. To make it easier to remain in that position, her midwife provided her with a wooden pole. Walters’ husband supported the pole while his wife labored.

Tareeshia Sapp of Clinton Township delivered three of her four children at the Alternative Birth Center.

“I was able to labor in the Jacuzzi tub for most of my second labor,” says Sapp, who also had the options for subdued lighting, music and aromatherapy.

There are birth balls, which help laboring women move around, easing labor pain and possibly shorting the first stages of labor. Peanut balls, or oblong-shaped balls, can be placed between a woman’s knees to open the pelvis or used to achieve a comfortable position. These are often used for women who need or want to stay in bed. The birth centers also offer showers and tubs to help mitigate pain.

Carol Fuller, the director of Perinatal and Pediatric Services at St. John Providence Health System, all of the Alternative Birth Center rooms also have CD players, televisions, refrigerators, comfortable furniture and queen-sized beds. The On Request food program allows mothers to choose meals. The unit also has a small kitchen, equipped with a microwave oven for food preparation. Families are also allowed to bring food and drinks to the birth center.

The Karmanos Center for Natural Birth at Beaumont Hospital in Royal Oak is designed to be as home-like as possible, with soothing décor and medical equipment that isn’t prominently displayed. Like the Alternative Birth Center, it also has queen-sized beds, tubs and showers in rooms that Paula Fishbaugh, a Beaumont Health obstetrician, describes as “hotel-like.”

“When you are in the room, you wouldn’t think you are in a delivery room at all,” says Fishbaugh. The patient stays in the room after the baby is born, allowing families to be together during the important bonding time.

The Karmanos Center for Natural Birth also has indoor walking areas and an outdoor garden and path for walking, particularly in the early stages of labor.

One of the most unique features of either natural birth center is the nursing and midwifery staff.

“My midwife was there for me. She had three other rooms with women delivering babies, but I feel like she was with me every time I needed her there,” says Walters. “She was so loving and so supportive, yet just in the background of my labor and delivery. She even had my husband catch the baby and tell me whether it was a boy or a girl.”

Sapp says the nurses and midwives encouraged her, especially during the tough times.

“If you are uncomfortable, the nurses will make suggestions. They know some tricks and things because that’s their regular method of action,” says Sapp.

According to Fishbaugh, the nurses in the Karmanos Center for Natural Birth have had formal training in the art of natural birth.

“They have had a lot of training on relaxation techniques, aromatherapy, massage and they are there to help with finding comfortable positions benefiting the labor,” says Fishbaugh.

Fuller agreed that the nurses make the experience special.

The Alternative Birth Center is staffed with midwives and nurses, whom the patient is required to meet prior to their delivery. The midwives also keep the nurses informed of patients to ensure a special bond between them.

“The nurses spend a lot of one-on-one time with the patients in labor and get to know them and their families. It’s a different environment than your traditional birthing unit,” says Fuller. “You feel connected to the patient in a different way.”

The data-crunching website has released its list that ranks the best school districts in Michigan for the 2023 school year. Did your community make the cut?
Read more
School Issues