If you plan to find out if you've got a boy or girl on the way, share the exciting news with loved ones using one of these gender reveal ideas. 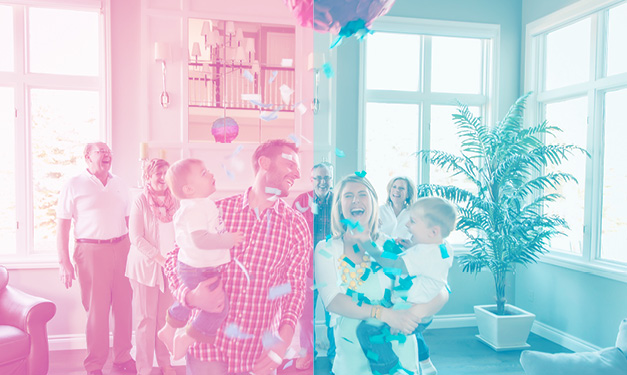 Is it a boy or girl?

Gone are the days of waiting until baby is born, then passing out cigars to share the news.

According to a 2007 Gallup poll, two out of three Americans ages 18 to 34 want to know their baby’s gender before it is born. And if today’s trends are any indication, they’re eager to share. From parties and photo shoots to favors and care packages, couples are finding ever more creative ways to reveal their baby’s gender.

Here are a few ideas.

The mother of all techniques is to serve a cake decorated with neutral frosting and a message like “Is it a he or she? Open to see.” When it’s cut open, pink or blue filling is exposed.

Just find out you’re pregnant? Here are some creative ways to share the news with the dad-to-be, family and friends on social media.

This concept can be extended to cupcakes stuffed with dyed buttercream, or cakepops adorned with question marks. But why not try something a little sweeter? Jillian’s Great Fortune Cookies, founded by metro Detroiter Jillian Frankel, can be personalized with bootie and rattle sprinkles and stuffed with custom messages that announce your family’s fortune.

A baby’s sex is usually confirmed during the 18- to 20-week ultrasound, but couples who just can’t wait turn to Baby Envision. The Michigan-based business, with locations in Brighton, Okemos and Troy, offers sonograms as early as 15 weeks, delivered in rooms with sleigh beds and love seats.

“It’s a lot of fun to see everybody’s reaction,” Kube says. “You get to hear the whistles, the claps, the tears, the hugs. A man almost did a cartwheel once.”

Surprise distant grandparents with a bundle of joy in the mail. Creative consultant Lisa Gleeson suggests wrapping up a small surprise, like a pacifier trimmed with a felt mustache or red lips, in gender-neutral paper for a fun reveal. Or opt for a pink or blue onesie with a note suggesting they save the outfit for when baby comes to visit.

For your wider circle of friends, pictures can say those three little words. Have your ultrasound technician seal the news in an envelope and deliver it directly to your photographer so she can capture your family’s surprise on camera. When Birmingham-based photographer Jennifer Kohl shot the Olins of Rochester Hills, she used a piñata for the reveal.

“They pulled the rope and out came the blue confetti,” Kohl says.

For parents who already know the gender, a popular photo series shows moms- and dads-to-be chewing pink and blue gum, then bursting each other’s bubbles.

For a more old-fashioned bent, print them out and add a pink or blue bubble gum cigar – classic, with a modern gender-reveal spin.

Fill a giant balloon with pink or blue confetti and prepare to pop! Or, put a few pink or blue balloons inside of a giant box. Wrap the box and put an, “Is it…” sign on the outside of the box. Open in front of family and friends.

Have a friend purchase a pair of pink or blue Converse shoes for the parents-to-be to unwrap during the gender reveal party. It’s a cute way to reveal the baby’s gender, and is one of your child’s first pair of kicks.

Parents in need of pampering are in luck, as there’s a relaxing and revitalizing spa offering just around the corner.
Read more
Camps