What to Expect With a C-Section

Cesarean sections have come a long way, from 'gentle' approaches to quicker recoveries to terminology like 'belly births.' Here's a look at what to expect with a C-section in metro Detroit. 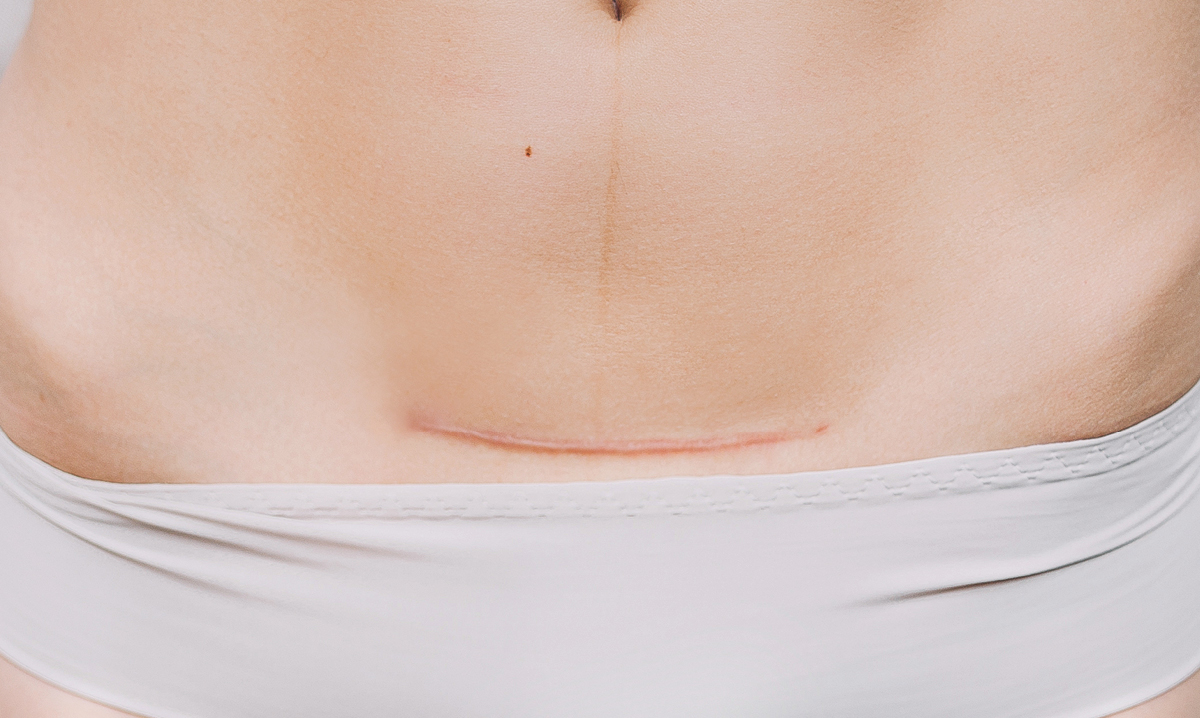 Danielle Siero was in labor for hours with her first child. After pushing for an additional four hours, nothing was progressing and her doctor opted to perform a cesarean section to deliver her daughter.

“It turned out my baby was stuck,” says Siero, a mom of three from Wixom who has shared her pregnancy and delivery experiences on her blog, A Sprinkle of Joy. “The doctor who performed the C-section says there was no way I’d have been able to push her out.”

For her second child, Siero had hoped for a vaginal birth after C-section, or VBAC, but she ended up requiring another one. When it came time to deliver her third child, she simply scheduled the C-section in advance.

“I had not prepared for a C-section birth with my first. While I learned about them in my birthing class, I didn’t really think I would need one,” Siero says.

According to the Centers for Disease Control, 28.8 percent of births in Michigan are performed by cesarean section. Like Siero, many of these moms are not prepared for having surgery and then caring for a newborn baby.

But cesarean awareness has been growing, too. Some local hospitals offer “gentle” C-sections that let allow moms to watch baby being born – and there’s a wave of women renaming the process a “belly birth,” shifting the focus from a stressful procedure and back the mini miracles they’ve labored to deliver.

Whether it’s planned or an emergency, C-sections aren’t as scary when parents-to-be are informed. Knowing the basics is helpful, says Kurt Wharton, an OB-GYN at Beaumont, Royal Oak, so you can be prepared should it occur.

There are several situations, like Siero’s, that necessitate a C-section. The March of Dimes notes that the safety of mother and baby are the most important outcome in the delivery and, to ensure this, C-sections may be needed.

“There are cases where it is absolutely necessary for the mother and baby for us to perform a C-section,” Wharton says.

The March of Dimes lists several complications during pregnancy as a reason for a C-section. Women who’ve previously had C-sections or other surgeries on their uterus may need to have C-sections.

If there are problems with the placenta, infections like HIV or genital herpes, maternal medical conditions like diabetes or high blood pressure or if mom is delivering multiples, doctors may also opt to perform C-sections.

Other unplanned situations can also arise. The March of Dimes says C-sections may be performed if labor doesn’t progress, the baby is very large or not in the optimal birth position, there is an umbilical cord prolapse or the baby is in distress during labor.

While Michigan’s rate of C-sections is lower than the national C-section rate of 32 percent, the World Health Organization indicates the optimal rate is closer to 10-15 percent.

“Being cut open means there is a great risk for a number of complications,” says Wharton. “For years, the C-section rate has skyrocketed with no positive outcomes for mother or baby.” In fact, rates around the world have tripled since 1990, according to a 2018 report in medical journal The Lancet.

But there are many risks associated with the C-section that many women aren’t aware of, Wharton says.

For one, the incision is usually about 12 centimeters across the woman’s pelvic region. It also includes cutting through the uterus. He says with the surgery comes the risk of infection, excess bleeding, damage to other organs and blood clots. This can result in the need for a hysterectomy, blood transfusions and longer hospitalizations.

According to Wharton, women who have C-sections have greater restrictions following the birth than those who have a vaginal delivery.

“After a C-section, the mom shouldn’t drive for two weeks, she shouldn’t pick up anything that requires two hands to lift and she should definitely prepare to be a little weaker and sore as a result of the surgery,” Wharton says.

Wharton says there have been advances in C-section recovery, and doctors now know that the best thing a woman can do after a C-section is to ambulate, or get moving around, as soon as she can after surgery.

“It’s called ‘early recovery after surgery,'” Wharton says. “We try to get the patients up and moving as quickly as possible. One way to help that: We use as little anesthetic as possible during the procedure, and we feed the mothers shortly afterward.”

He says historically, moms were kept in bed for days following a C-section and they weren’t given any food until they were able to pass gas.

“We’d give them clear liquids and they’d endure days and days of torture,” he says. “Now, we find the sooner you put food in your intestines after surgery, the sooner they begin functioning properly and ‘wake up’ from the anesthetic.”

While everyone has a different threshold for pain, Wharton says doctors are using narcotics much less, which also helps in the recovery process.

“The sooner we get people up and moving after surgery, it’s remarkable, their pain requirements are much less,” says Wharton says. He says many women find medication like Mortin, ibuprofen, Aleve and other anti-inflammatories are enough to ease their pain.

The hospital stay for women who have vaginal deliveries can be as short as 24 hours, but those who have C-sections may need a longer stay.

Wharton says women who have scheduled C-sections are physically and mentally prepared, have their post-operative pain medication already at home and have a support system in place could be ready for discharge as soon as two days.

“Then you have a woman planning for a vaginal delivery, labors for days, pushes for hours and then ends up in a C-section,” Wharton says. “She might have to stay three, four or even five days in the hospital to fully recover.”

Siero says the C-section recovery caused her to slow down after the birth of her children.

“You have to remind yourself that you just had major abdominal surgery. Getting up to sitting from laying down can be a bit challenging. You don’t realize how much you use your stomach muscles until they’ve been operated on.”

Siero says it took about a week for her to begin to feel better, but she learned the hard way after her second C-section that it’s important not to overdo it too soon. Siero says she was “super sore” for days as a result. “After about five or six weeks, I started to feel normal,” Siero says.

Doctors also impose greater constraints on moms after C-sections. Wharton says they are mostly to protect the mother from pain.

He says moms who have C-sections are advised not to drive for two weeks.

“You may feel fine, so you get in the car and as you are driving away from the house, a ball comes rolling into the street and you know a child is coming behind it. You press on the brake and it hurts so bad that your foot comes off the brake. Not only is it painful, but you are also a public nuisance. It’s not safe for you to drive for about two weeks.”

Wharton says moms are also advised to wait two weeks before working out and exercising, too – and even then, he recommends easing back into it gently.

For moms who have had a C-section, having a strong support system in place when returning home is key. Wharton says moms will need help with laundry and preparing meals, and even climbing stairs may be difficult. Knowing who will help with those chores in advance is a huge help.

“There is an emotional aspect to the C-section, as well,” Wharton says. “You have to surrender yourself to the people who you may trust or know well, or sometimes those you maybe haven’t even met before. There are anesthesiologists, nurses, bright lights and lots of tools.

“It can be disturbing if you aren’t ready for it. You can prepare a little in advance.”

He suggests taking a C-section class at the hospital or watching videos as a way to know what to expect. Have an open line of communication with your doctor, too. Wharton says he spends a lot of time describing his surgical process to patients as they go through the C-section.

“We encourage doctors to get to know their patients and know their fears and needs so a C-section is not traumatizing,” Wharton says. He adds that doctors and patients can have conversations about what patient wants in a C-section in advance, like a “gentle C-section” with clear plastic curtain during delivery (see sidebar). “If it’s a true emergency situation, I ask the patient to trust me and I will do everything it takes to take the very best care of them.”

Whether women have questions before or after delivery, they need to be comfortable contacting their doctor,” he says.

“The only time a patient will upset me or hurt my feelings is if they don’t call me. Most of the time if something is freaking the mom out, I can reassure her and give her the information she needs.”

Some C-sections are unavoidable, as with Siero’s. However, some women aren’t prepared and have an emotional response to the C-section – which can add another layer to the recovery.

“Trying not to beat yourself up,” Siero tells moms who need belly births. “You are still giving birth to your child even if it’s not the ‘natural way.’ I know this is easier says than done, as it’s something I’m still working on.”

Those who are struggling with postpartum depression or post-traumatic stress over their delivery should talk to their doctor.

For moms-to-be who must have a C-section, there’s been a growing trend to make it feel less like a procedure and more like a traditional birthing experience.

As stated before, part of that includes clear drapes covering mom instead of the traditional opaque blue ones, so mom can see the baby being born. There can also be immediate skin-to-skin-contact and elements like calming music and aromatherapy.

The “gentle C-section” is slowly taking off in metro Detroit, too, says Wharton – noting that the practice is already common in other parts of the country.

That clear barrier between the mother and the operating field is key. It allows the parents to see the process and the moment their baby emerges from the womb.

It’s an option that Siero – whose three children were all “belly births” – encourages women to explore.

“Although I was not able to have one myself, as I needed to be under general anesthesia, I have heard amazing things about them,” Siero says. “They allow you to feel more part of the birthing process.”