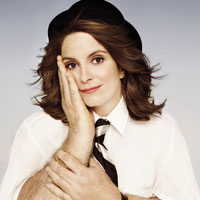 I casually bought Tina Fey’s audio book Bossypants, thinking it would be interesting to hear what this successful writer, producer and actress would have to say about her career. I’m sure people have varying opinions of her in general, but I don’t think anyone can deny that as Saturday Night Live’s first ever female head writer – and the executive producer of a major network television show – Fey has made some impressive strides as one of the entertainment industry’s most powerful women.

And it’s a fun read. Not only does Fey freely describe herself as sometimes imperfect, vulnerable and uncertain in her career, she makes it very clear that she is just as lacking in confidence about being a mom as any one of us. Busy executive woman she is. Superwoman she is not.

She points out, though, how tough moms can be on each other, using the example of the apparently huge controversy (and endless guilt-tripping) over breast-feeding.

What’s kind of fun about this topic for me is that I never had to deal with it. Yes indeed. One major angst-generator of modern motherhood passed blissfully by me. Because my husband and I adopted our kids internationally long after they’d been on formula, we never even had reason to think about it. So I don’t even have a dog in the breast-feeding fight. I just think it is a great symbol for how moms give each other a hard time sometimes, rather than follow the advice of good old Dear Abby from years back – MYOB!

Is the breast best?

I don’t think anyone questions that breast-feeding is the best possible way to nourish a baby. But many woman have simply can’t do it. Some have to take medications for their own health and have to give it up. Others try and try and for some reason they simply can’t do it. My mother tried so hard with her first child, my older sister, but had no success. That didn’t stop every woman she knew from giving advice that just created more stress and helped hasten failure. Even her maiden aunt had strong opinions on the matter. What the heck did she know?

My sister took her share of drubbing over the perception that she breast-fed way too long. Geez!

Tina Fey writes that she tried every way known to man to feed her newborn daughter in the hospital, but nothing worked. Her daughter wasn’t interested. The minute she fell asleep the nurses gave the baby formula. But Fey kept trying. She wrote about generational opinions of breast-feeding, even comparing her own desires (Gen X) to her daughter’s (Gen Z). “Gen X wanted to succeed at this so she could tell people she did it. Gen Z wanted me to hand over that [bleep] formula, and she was willing to scream until she got it.” And so, Fey eventually gave up.

But she was shocked by the ferocity of others criticisms that she had done the wrong thing. She sums up the experience this way, “When people say, ‘You really, really must’ do something, it means you don’t really have to. No one ever says, ‘You really, really must deliver the baby during labor.’ When it’s true,” Fey concludes, “it doesn’t need to be said.”

I’m with you, Tina. Moms have to remember that there is enough stress inherent in mothering that the last thing we need is our sisters in mommyhood giving us a hard time.

We’re all imperfect about something, so MYOB!

Make mealtime less of a hassle with these fun ideas.
Read more
You