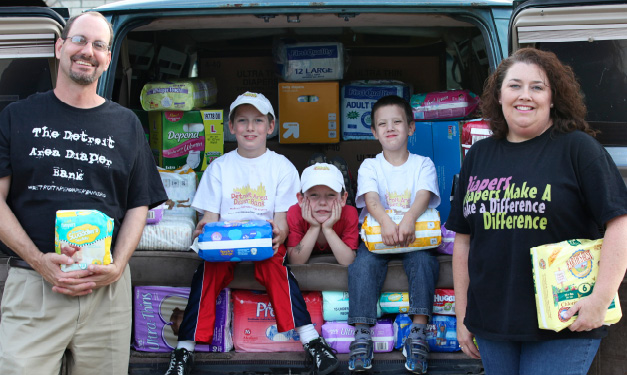 This story appeared in the November 2010 print edition of Metro Parent.
Photos by Kristen Hines

After seven solid years of changing dirty diapers, most moms would prefer to put Huggies and Pampers behind them. Not Marybeth Levine. That was more like a cue.

Today, her Canton home is packed with disposables. She Tweets and Facebooks about them daily. But this time, they’re all clean – and going to families in need.

All while managing her own little band of three young boys, all under age 10. Just to clear the air on one thing: “I couldn’t wait to stop buying diapers – for my kids,” Levine laughs. “I enjoy it now. It’s not a burden. It’s a gift.”

And, in truth, it’s a passion with pre-kids roots. The nation’s first diaper bank formed when she was a newlywed in Tucson, Ariz. A radio station there was promoting one of their drives, complete with stories of low-income families reusing, even stealing, diapers – unable to afford monthly bills of up to $300.

“It just hit me,” Levine recalls. “I had no idea that people who were on assistance couldn’t get diapers. It’s a massive, huge, gaping hole in the safety net.”

She donated on the spot, and continued when her family moved to Michigan in 2003. It wasn’t until her own brood was a bit older, though – and the economy was in shambles – that she realized her dream of starting a bank. Tapping heavily into free social networking sites, Levine quickly teamed up with some 35 local nonprofit and state-service agencies, from food pantries to homeless shelters. “We’re helping them create a whole solution.”

An entrepreneur-turned-stay-at-home-mom, Levine’s gusto is infectious. Her “viral” efforts have lured charitable grants and donations region-wide. Orphan diapers are a biggie: Half-empty packs are happily accepted. Once, she scored a huge pile of new-in-shipping-box adult diapers, another tremendous need, salvaged from a trash bin.

“I take as much as I can, every time,” Levine says. They’re stored in her family’s basement (aka The Diaper Vault), loaded into the “diaper mobile,” driven and delivered.

“It’s a pretty basic process. We immediately put them to use.” How’s she juggle it with school, flag football and scouts? Plenty of after-bedtime work and on-the-go phone tweeting.

But family also plays a part.

“They’re my staff!” The older boys schlep boxes. Husband Steven is on the board. Even her dad, who lives in Virginia, pitches in (see them in action on Levine’s YouTube channel, DADiaperBank). “I definitely couldn’t do this without the support of my family.”

Recent time in the trenches has helped. Diaper sizing is no sweat. “My boys did not potty train easily or quickly,” Levine adds. “I have empathy!” Of course, she’s got levity, too, about quips like dropping off “a load” and making “deposits.” A shirt that says, “The Diaper Lady’s Here!” may be in the works.

But she’s serious about educating – and filling a major need. Levine envisions a free-standing warehouse to serve all of southeast Michigan. If that means dealing with diapers for the rest of her life? Fine by this mom.

“This is a natural fit,” Levine says.

Gig: Runs the Detroit Area Diaper Bank
Husband: Steven
Mama Mantra: As long as it’s coming from a good place, your kids are going to be fine.