A Guide to Baby Poop

Diaper duty is a chance to check on your child's health. Read up on normal poop colors and learn the answer to, 'what should newborn poop look like?' 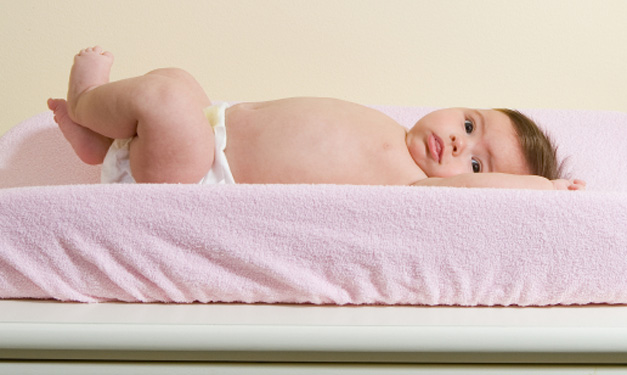 Diaper duty is a dirty business – and a full-time job, especially in the weeks right after that sweet bundle arrives. Just ask Tracy Connelly of Ferndale.

“When they’re really little, they poop all the time,” recalls Connelly, whose kids Cian and Cassidy are now well past the baby stage. “And you never know when it’s going to end.” Mid-change “surprises” pop up. Wait too long, baby could konk out.

For new parents – and even veterans – that sudden flush of baby poop can be consuming. But experts say that while it holds basic clues about baby’s health, ultimately, this too shall pass.

Be warned: The first few “deliveries” are unlike any poo you’ve ever seen. Called meconium, it’s thick, tarry, sticky and almost black. It can last a couple days, and newborns should pass the first batch in 24 hours (48 max).

“This is just all of the stuff and debris in their guts, through the nine months in utero, that they need to clear once they start eating orally,” explains Dr. Michelle Pavlik with Woodhaven Pediatrics. After all, amniotic fluid – which serves as both a food source and a toilet for baby’s urine – can be a messy place.

Meconium’s texture make cleanup a chore; initially, disposable diapers are ideal. The odor isn’t strong, making it tricky to sniff out. But the key is to catch and clean it quickly, Pavlik notes, before it settles on the skin. Then, “you really have to kind of work at it,” she explains.

And if you’re breastfeeding, expect it to last a bit longer, since it takes two to three days for mom’s milk to come in full-force and flush out baby’s system.

Ready for the smelly stuff? For the next two or so months, “normal” bowel movements can vary by baby, doctors say. But there are guidelines.

Baby’s meals are one factor. Breastfed poop, as it’s called, tends to be a mustard color with a seedy or “curd-like” graininess – and it can be runny. For formula-fed babies, a darker hue and slightly firmer texture is typical: “It can be green, it can be brown – it can change on a daily basis,” Pavlik says.

To better prep parents, Pavlik pulls out her “poop chart,” which gives a real-life look at the ordinary. For instance, a liquid consistency is common, but it’s often mistaken for diarrhea. “Unless poop is bloody or nonexistent, then, pretty much, it wouldn’t indicate anything other than a healthy baby,” she says.

To learn more about children’s bowel movements and what’s healthy, check this article.

Initially, four to 10 daily stools are standard, especially for breastfed babies. “If they have a bowel movement every feeding, that would be just fine,” says Dr. Steven Glickfield, a pediatrician with St. John Providence Health who practices in Novi and West Bloomfield. If it’s less, “make sure they’re gaining weight.”

Amount counts: “If they’re having just a small amount many times, versus one or two larger ones, it all evens out.” Every couple of days is OK, Pavlik adds, as long as stools are soft.

At around 2 months, there’s some tapering. Connelly, who breastfeeds, says at that point, Cian had solid intervals of at least an hour between poops. He was less fussy, too. But that was a trade-off: “It was sneakier!” And by 4 or 6 months, when solid foods enter the scene, “all bets are off,” Pavlik says.

Along with developmental milestones, Glickfield and Pavlik agree, a baby’s growth is a better yardstick for health than poop. Even for non-emergencies, though, when in doubt, pediatricians suggest erring on the side of calling. Blood or hard, ball-like pellets are key warnings, Pavlik says.

Glickfield checks to make sure baby’s abdomen is soft and not distended. If so, the baby is likely fine. “Most of it’s pretty routine stuff,” he says.