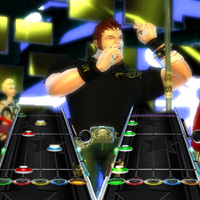 With the gift-giving season in major crunch mode, it might be best to plunk down the money for one gargantuan "gimme" gift for the kids. Voila: You’re done! Meet Band Hero, the made-for-music-geeks game with a Top 40 twist in which players warble like an American Idol wannabe, bang drums and shred guitar.

A lot like Guitar Hero 5, Band Hero is basically its pop-centric twin (available for multiple gaming consoles), culling some of the most infectious songs. All in all, it’s a comprehensive mix of oldies-but-goodies geared toward the parents, like the Jackson 5’s "ABC" and Pat Benatar’s "Love is a Battlefield" – plus tween-treasured tunes from artists like Jesse McCartney, Hilary Duff and Taylor Swift. And Taylor Swift. And Taylor Swift.

With Band Hero, you can be the pop-country princess (who hogs the 65-tune track list with three songs). Well, a very robotic avatar of her, anyway. And as much as kids will dig pretending they’re an international singing sensation (who plays a real guitar, not some plastic imitation), there are lots of neat niceties. Take, for instance, the karaoke mode, where players can act like the worst contestant in American Idol history, hitting as many bum notes as they want, without getting booed off stage.

Um, yeah. Bad idea? Then you might prefer the more disciplined version, where the kids can tailor their own make-believe band and risk humiliation – and there’s none of this "sing any way you want" nonsense (which might only be a good idea if your kid actually is Taylor Swift). It sounds fun, until someone’s eardrums get hurt. Plus, it’s just far more amusing with the challenge of hitting the teeter-tottering notes of soul singer Corinne Bailey Ray or keeping up with the lightening pace of "ABC."

Almost everything about Band Hero – rated for ages 10-and-up, but fine for younger children, too – is user- and family-friendly, and not just because the kids won’t be channeling Metallica. It’s set in shopping malls versus seedy bars, bad language is bleeped (even the "whiskey" – but not the "rye" – reference during the Don McLean classic "American Pie" is nixed) and players can select from a multitude of difficulty levels, including "beginner" – on Party Play mode, even during the middle of a song. That means the little ones can haphazardly sing or smack the drums without a single care in the world. Again, cool – for them.

But Band Hero is hardly a bummer. Even if it shadows a lot of its music-making prototypes, there’s a lot of fun – and noise – to be had. Of them all, this one seems most gung-ho about making sure the kids – and you, the shameless pop-loving parent – have it.

And if Taylor Swift gets in the way of it all, school them on what real music is after making them listen to you rock out to The Rolling Stones. Mother knows best, right?