A Different Kind of Dog: How Service Dogs Help Kids

Learn how service dogs of all kinds help those with special needs, health issues and disabilities – and provide important companionship. 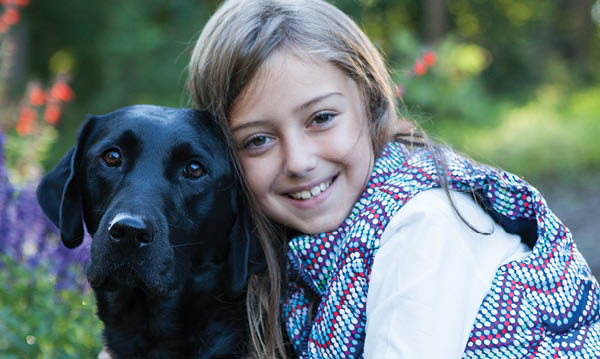 Hudson is more than a 4-year-old black Labrador retriever who likes toys, treats and attention. She is a safety net and a lifeline to 8-year-old Ella Naebeck of Ann Arbor.

Ella has Type I diabetes and, despite the fact that she and her parents are extremely diligent about managing her blood sugar, her levels fluctuate constantly. A drop can happen quickly, leaving the Naebecks with precious little time to respond to a potentially catastrophic change.

When Hudson can into Ella’s life on April 7, 2014, she was “a game changer,” according to Ella’s mom Leslie Naebeck. Hudson is trained to detect a fluctuation in Ella’s blood sugar, and she notices that change as much as 30 minutes before Ella’s meter registers it.

Hudson gives Ella a quick sniff and, if she catches a difference in Ella’s scent, she nudges the third grader with her paws and does what Naebeck calls a “doggy dance.” Once Hudson alerts them to a worrisome change, Ella or her parents know to check her sugar level.

“The dog is just another tool we use to manage Ella’s diabetes,” says Naebeck. “While she is incredibly good and talented at her job, she’s still a dog. But so far she’s never been wrong.”

Although there are no registration requirement for service dogs, Hudson is one of a growing number of service dogs used by children and adults to gain greater independence and, as in Ella’s case, peace of mind.

How they help, how to get one

A service dog, according to the Americans with Disabilities Act (ADA), is specifically trained to assistant an individual with a disability. Service dogs are perhaps better known for guiding those with visual impairments. But they’re also trained to aid or alert people with medical conditions including seizure disorders or allergies. Service dogs also are used to assist people with mobility, autism, hearing impairments and those needing psychiatric assistance.

While there are numerous organizations throughout the country that train service dogs, the process of obtaining one is similar for each provider. Once a child’s application is approved, many families fundraise – because the cost of acquiring a dog can be approximately $20,000 or more.

“Then it’s a question of waiting for the right dog to be trained for your child’s needs. Once you get the dog, you have to be trained initially to work with the dog, and then you have to maintain that training on a regular basis,” says Naebeck.

Because of the demand for service dogs and lengthy training process, it can take a year and a half or more to get a dog. Organizations that don’t charge take longer.

Some, like Paws With a Cause, or PAWS, headquartered in Michigan, do not charge but have an age requirement and a waiting list.

They place seizure or service dogs with individuals 14 or older, hearing dogs with ages 18-plus, and autism service dogs with children 4 to 12 years old. Due to the long wait time, families can apply before the age requirements are met.

“The dog is provided at no cost to the client,” says Deb Davis, community outreach manager of PAWS. “However, PAWS needs to raise $30,000 to cover the cost of breeding, care, customized training and continued support of each team. The majority of funds raised comes from individual donors, but we also get support from businesses, foundations and community groups.”

For families who pay, many find creative ways to raise money. The Naebecks were so successful with their fundraising efforts that they established Canines of Hope, a nonprofit that helps fund a diabetic service dog for one Washtenaw County family each year. The foundation also assists with other needs such as diabetes camp and medical supplies.

Worth the wait, cost

The benefits of service animals have been established. For instance, just this year, a University of Missouri researcher noted that children with autism were more likely to engage in social situations where pets were present.

And families using service dogs and those who provide the dogs see the clear benefits. Davis of PAWS has multiple stories of how service dogs bring a sense of security and greater independence to those who need it.

She recalls one young man with a medical condition that causes him to stop breathing at night. Because did not always wake up from the alarm on his breathing monitor, his parents took turns watching him sleep. His service dog took the role of night watchdog, giving him and his parents the peace of mind they needed, especially when he left for college.

Karen Shirk, founder of 4 Paws for Ability, based in Ohio, also knows the benefits of a service dog. Besides having one herself, her organization trains and places dogs with children around the world. She says the majority of her requests are for autism service dogs.

Aside from providing companionship, an autism service dog can help a child on the spectrum cope with sensory overload, fall asleep, prevent wandering or sound the alert when wandering occurs, interrupt self-injurious behaviors and expand a child’s communication.

Maribel Meador got her autism service dog, Magic, when she was 14. Her parents Dave and Peggy Meador of Troy say the dog was a “godsend.” In the five years they’ve had the golden retriever, they’ve seen Maribel’s meltdowns become less frequent and severe – because Magic knows the triggers and provides the deep pressure Maribel needs to help calm her down. Magic also has helped bridge the social gap that exists between Maribel and her peers, allowing her to feel more comfortable talking with others.

Despite the benefits of a service dog, it may not be right for every family or child with a disability, particularly if a child is afraid of dogs.

“Going on an outing with a dog drastically changes things. You have to learn a new normal. It’s not a bad thing. It’s just different,” says Naebeck. “Now you’re planning each outing with the dog’s needs in mind. If it’s hot, you have to remember to bring water or if you’re going to be gone for a long time you have to think about bathroom breaks.”

The Naebecks take Hudson almost everywhere they go. Quick outings take extra time, because people want to stop and talk about the dog and find out why Ella has one.

Although service dogs are allowed in schools, a child must be able to handle the dog or have an adult who can do so, because schools are not required to assist with the dog.

Ella doesn’t feel comfortable in that role, so at school, she has an aide with her to keep close watch on her blood sugar. Maribel, on the other hand, is always with Magic. The Meadors initially had to work closely with the school to ensure a smooth transition, but having the dog there gives Maribel a higher level of confidence and independence.

“Overall, people are very nice and accommodating,” says metro Detroit mom Adva Kohn. “We had a situation where a restaurant was reluctant to seat us. The manager asked if the dog was a service dog, which he is allowed to ask. But then, he asked why my son had the dog. The law clearly states that a business cannot ask about a person’s disability. It made us very uncomfortable,” says Kohn.

After a lengthy wait to eat at a mostly empty restaurant, the manager seated them – but only after Kohn showed him a card identifying their standard poodle as an autism service dog for her 11-year-old son.

But Kohn says these inconveniences are more than worth it. “They’ve bonded so quickly and they have so much fun together. My son is laughing and playing more than ever. The dog doesn’t care about his autism. He doesn’t judge my son, he just loves him. They love each other, and it’s a pure love.”

See Mirabel along with her family and sisters, Elsa and Anna in a new Disney on Ice show in Detroit.
Read more
Travel