Do children have a right to privacy? How much privacy should a teenager have? Experts offer their insights on privacy and kids — and they may surprise you. 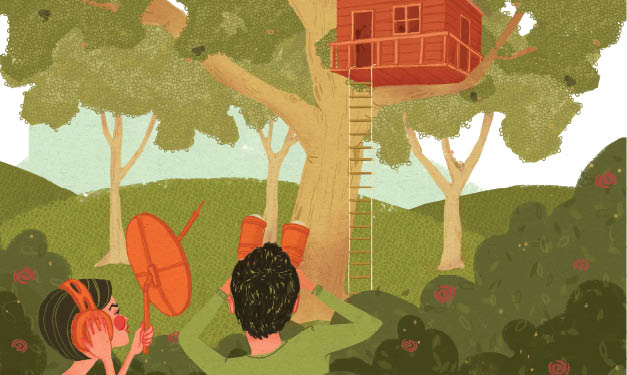 Enter at Your Own Risk! No Grown-Ups Allowed!

We’ve all seen these types of signs – and perhaps made them ourselves when we were young – but what happens when we confront one posted outside our own child’s bedroom door?

For many parents, it’s a struggle to accept a child’s increasing desire for privacy. A closed door, locked diary or deleted text thread represent a growing child’s desire to separate from her parents and carve out a place for herself.

These symbols might be accompanied by outright requests to stop cleaning her room, keep out of her dresser drawers or stay away from her Facebook page.

Should parents respect their child’s privacy and, if so, when? According to experts the answer is yes — and pretty much always.

It’s a constant balancing act that gets more difficult as children move into the tween and teen years, according to psychologist David Manchel formerly of Counseling Associates in West Bloomfield.

Yet no matter how much your child’s boundaries change, what remains constant is the need to balance permissiveness and structure, setting the stage for your child to develop in a healthy, self-confident and autonomous way.

“A child should look upon the world as a safe place where she is free to roam, explore and try new behaviors, versus a child who is much less confident, has more anxiety and is more inclined to retreat into a more private, avoidant world,” Manchel says.

Privacy encompasses how much control a person has over information about himself, as well as property he considers his alone, such as a bedroom or journal or cellphone communications.

Establishing these personal spaces requires setting up boundaries that other people may not cross without permission, according to Sandra Petronio of Indiana University-Purdue University, who first proposed her communication privacy management theory while working on her Ph.D. dissertation at the University of Michigan.

Within a household, there are collective privacy rules the entire family lives by, such as whether to discuss dad’s salary with outsiders or share photos of junior online. In addition, each member of the family has his own privacy rules, Petronio says.

As children develop, so does their understanding of privacy and their desire for a place to call their own. Parents must respect the evolving privacy rules of their children despite their curiosity or concerns, Petronio says, or they risk losing their child’s trust for good.

“Parents must acknowledge their children’s rights to have these rules whether they like them or not,” she says. “If they simply invade their privacy, children will be very creative about ways to keep information from their parents.”

Small children must rely on their parents for everything from bathing and dressing to the most intimate bodily care, and start out with little concept of privacy.

“They do know about a ‘secret’ — you either tell it or you don’t — which grows into a more cognitively complex concept as they grow up,” Petronio says.

Some of the first signs of modesty can emerge as early as age 3 and may include hiding from one parent as another changes them or becoming self-conscious when they need help in the bathroom.

As children reach adolescence, Petronio says, their understanding of privacy becomes more nuanced as they start to differentiate between their parent’s world and their own.

“They begin testing out privacy rules that belong to them, not their parents. That’s why they put out signs that say ‘Do Not Enter,’ and ‘Don’t Touch,'” Petronio says. “They begin to decide what’s private and what their parents have a right to know about.”

Starting around age 10, children may begin to spend more time in their room or create clubhouses where they can literally and metaphorically escape from the world.

Tweens jealously guard their personal space and may declare their bedroom off-limits to siblings as well as parents – even if it means living amidst a mess.

They may also distance themselves from mom and dad as friends become increasingly important, and may begin to share more information with their peers. They may also begin to write their innermost thoughts in a journal and set aside a space, like a dresser drawer, to store private things.

Petronio says this should be encouraged.

“They need some place of their own, otherwise they never will learn how to manage those things. You have to trust them enough to give them ownership over space and information to be able to have them learn when things work and when things don’t work,” Petronio says.

Children will absorb privacy lessons on their own and recalibrate new rules in reaction to “privacy turbulence.” For example, they will no longer share private information with a close friend who can’t keep a secret.

Parents must work to prevent kids from making new rules that shut them out, as well.

The teenage years are a time of experimentation, and many teens are reluctant to talk about sensitive subjects with their parents.

This is when things can get really tricky, but “snooping” is not the answer, Petronio says.

“A lot of times parents think everything in the house belongs to them and anything children claim is not really theirs until they move out,” Petronio says. “That’s a bad scenario.”

Before poking through possessions or online caches, Petronio says parents should simply ask their child if they can take a look. Thirty-five years of research into children’s privacy issues, across cultures and contexts, shows that 95 percent of the time children will say yes, she says.

“You’re allowing your child to have control with the understanding that whatever they do in that private space isn’t going to harm them in any way,” she says. “You give them the responsibility of caring for themselves and doing the right thing, because in the end they know when something is wrong.”

What if parents inadvertently come across something private online, in a drawer or from a third party that presents a real concern? They must approach their child with care or risk having them withdraw even more, Petronio warns.

“When a parent confronts them, they’re going to recalibrate new privacy rules that will be so hard and fast, it will be very hard for the parent to break it down.”

Many parents worry more about offering their children privacy online than in the real world, but both realms should be treated the same, according to Hemanshu Nigam, CEO of SSP Blue, an online security consultancy based in Beverly Hills, Calif.

“From a child’s point of view, they don’t see a distinction between online and offline. They hear the privacy message, and they will apply it everywhere. To them it’s all one and the same,” he says.

Parents may tend to panic about the Pandora’s box that can be opened through texting, tweeting and surfing the web, along with sharing photos and information on social media.

Or they may feel intimidated by new technology, apps and features. Nigam recommends parents ask their children for help.

Set up weekly tech sessions and ask your child to teach you something new each week, he suggests. It’s an opportunity for you to work together to set up boundaries and controls, as well as talk about privacy issues, pitfalls and your values as a family.

Just as employees know their company can track their computer usage, tweens and teens should understand that their online activity can be monitored – but experts say at some, point parents need to trust their children or risk alienating them.

“To some extent, the values of the parents have been laid down by the time (kids) reach puberty,” says Dr. Romeo Vitelli, a Toronto psychologist.

Teenagers need the opportunity to succeed and fail on their own without a parent constantly watching over them.

“If a child doesn’t give any indication they’ve betrayed the trust, then that means they’ve earned the right to be trusted,” Vitelli says. “If a child knows that a parent is looking over their shoulder, they’re going to be less likely to be open about what’s going on.”