How often do you bathe an infant? How do you coax antsy toddlers into a tub or convince your tween to wash up daily? Here's advice galore for parents. 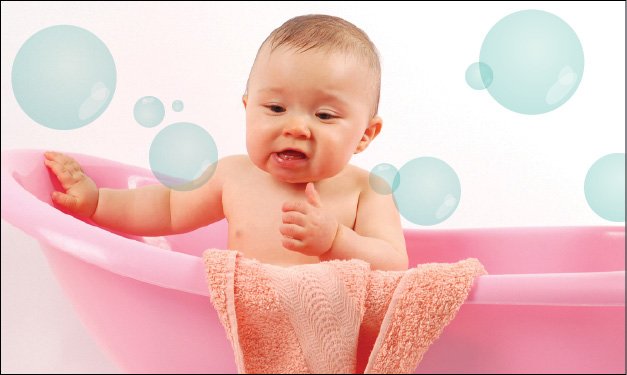 When it comes to getting clean, is there such a thing as too much bathing, or too little? How often do you bathe an infant? And how do you coax reluctant kids into the tub? We consulted the experts for some advice on bathing children at every age.

Dr. G. Christopher Popp, a southeast Michigan pediatrician and internal medicine specialist, advises parents to keep newborn babies out of the bathwater, at least at first.

“You shouldn’t submerge them until the umbilical cord falls off, and then bathing every two to three days is adequate until they’re moving around, playing, falling in the dirt, that kind of stuff,” says Popp, a father himself of three children.

Still, Popp says he sees no harm in a daily bath.

“The concern has been that for children with eczema, you shouldn’t bathe them too much because it can be drying,” Popp says, adding that a recent study by National Jewish Health in Denver, a leader in pediatric allergy and asthma treatment, actually found daily baths for eczema patients helped remove irritants and improve the skin.

Popp subscribes to NJH’s “soak and seal” method for babies 6 months and older, which calls for daily baths of a 10-15 minute duration, using warm water and gentle soap applied with the hands.

The key is applying a prescribed medicine or unscented lotion immediately after patting dry with a towel.

“You have to moisturize them literally two to three minutes after they get out of the bath,” Popp says.

Shannon Yee, a stay-at-home mom of three in Livonia, says she scaled back on soap after her middle son, a classic redhead with a fair complexion and sensitive skin, showed signs of irritation. Her children, ages 3, 5 and 7, have benefited from less exposure to harsh soaps, she says.

“We bathe them usually every other day, but generally they just play in the water and we wash them with water and a washcloth. Once a week we’ll wash them with soap and maybe shampoo,” Yee says. “For us, that has been a good balance.”

Popp says parents need to acknowledge there are germs everywhere – in the home, the soil and on children’s own bodies – but simple hand-washing with soap and water before meals and after the potty is enough to prevent infection or illness.

“I think these antibacterial soaps and lotions wherever you go is overkill,” he says. “Just do what grandma told you.”

The top rule of tub time safety is, of course, never to leave a baby alone in the bath. Here are some other tips to keep bath time safe and successful, from Ask Dr. Sears:

Infants: Pick a time of day that baby is wide-awake with a full tummy. Sponge bathing should be done with the baby on a towel laying in some warm sunshine through a window. In the tub or sink, use a soft spongy bath mat. Take time to gently massage every part of the baby’s skin with warm soapy water. This touch time really builds connections. Never leave an infant alone in the tub.

Sitters and crawlers: While baby is first learning to sit, a soft bath mat is a must, in case baby tips over. Sit close to the tub and be sure to cover the bathtub spout with a rubber or plastic protector. Never leave even an older baby alone in the tub.

Toddlers: Set up some basic ground rules, like “water stays in the tub” and “your bottom stays on the bath mat.” There should be no standing until you feel your child’s balance is sufficient, and absolutely no touching the faucet knob (kids can get burned by turning on the hot water).

According to a 2011 survey of children’s bathing habits by popular facet brand Moen, the popular faucet brand, most parents report that their children bathe or shower seven days a week.

Inevitably, there will be times your child protests a bath, and it doesn’t pay to argue.

“You can’t explain germs to young children, because it goes in one ear and out the other. They don’t have the ability to understand the long-term importance of bathing,” Popp says. “The key is not to fight and make it fun.”

Bubbles, special toys and personal time with parents can encourage children to look forward to washing.

“Get in the bath with them, start them with a bathing suit on, so they feel like they’re going swimming, read them a story while they’re in there – anything you can do to discourage them from the fact that they hate it,” he says.

Tablets that color the bath water, bubbles to blow, washable paints and toys that float, sink or swim add to the entertainment value.

Fill-and-dump games and splashing are favorites for young babies, while crawlers love to search for “sunken treasure” under the suds. Toddlers like arranging cups, blocks and action figures along the side of the tub, which builds fine motor skills.

For 2-year-old Analeise of Plymouth, baths mean special attention from dad. Ross Chasey has bathed his daughter since she was born, mainly because her tub time falls during the short window between his arrival home from work and her bedtime.

“It’s been a good way to get to spend time with her and get something productive done, as well,” he says.

Popp acknowledges that routine can keep kids on track for baths, even if they rebel from time to time.

“Routines are good for kids. When parents think kids are testing or pushing the limits, they’re not trying to step over the boundary,” Popp says; “they’re making sure parents will keep them in the boundary, because they feel safe and structured and stable.”

Three in 10 parents bathe their kids together in the same tub, notes the Moen survey, allowing some sibling suds time. Those same parents said they would stop the tub togetherness for opposite-sex siblings at around 5 years old; for siblings of the same sex it would cease at around 7 years old.

A general rule of thumb, says Popp, is to stop bathing children together when they can handle all the duties of bathing on their own, which usually occurs around ages 5 or 6.

At about the same age, you can trust your children to take unsupervised baths or showers, and begin offering them privacy.

“You get into middle school age, and it starts to become a social issue if you don’t bathe,” he says. “We all remember the kid in school who stunk and got made fun of.” As young adults grow more body and facial hair, and become involved in sports and activities that make them sweat more, it’s important for parents to enforce showering as a priority.

“That’s one thing you can remove to keep kids from getting singled out,” Popp says.