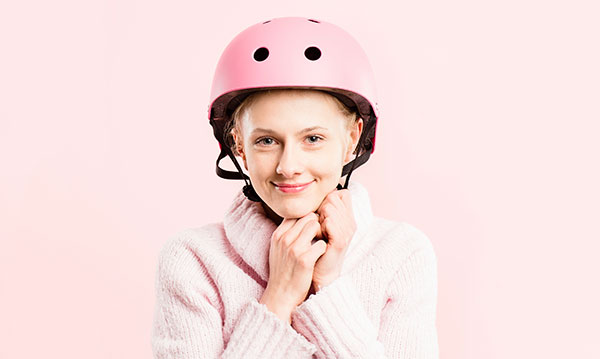 Whether you’ve just removed his training wheels or he’s mastered the no-hands style of riding, at some point, your kid is going to fall off his bike.

But some spills are more severe – and life changing – than others. In fact, in the July issue of Metro Parent, Dr. Kelly Levasseur, a physician in the Pediatric Emergency Center at Beaumont Children’s Hospital, says that bike injuries spike in the summer months.

And as temperatures continue to rise, injuries related to not wearing bike helmets naturally increase.

A 2013 study from Boston Children’s Hospital found that states with bicycle helmet laws have fewer bike fatalities for kids under age 16. Michigan is among the states that do not have bike helmet laws in place, though there are some local laws.

And, with the weakening of the motorcycle helmet law that exempted those ages 21 and older from wearing a helmet, the trend seems to be against safety legislation – despite the statistics.

Sen. Steve Bieda (D-Warren) thinks it will be difficult to enact a bike helmet law for adults, but believes it would make sense for children. Bieda, who was opposed to the change in the motorcycle helmet law, told Metro Parent in 2013 that he just passed a resolution to endorse bicycle helmet safety.

“I think it does need to be promoted more,” Bieda says. “It keeps people and children safe within the community, and that’s why I’ve always promoted it.” Bieda says it’s worth the modest price of a helmet to prevent injury. “Lives are so precious. You hate to see something that is avoidable happening, especially when you’re dealing with children.”

For kids under age 18, there were three deaths where a helmet was not worn in 2007 and 2008, two in 2009, five in 2010 and one in 2011, according to data from the Michigan Department of State Police. In those same years, there just one death reported of a child wearing a helmet.

Injuries are another major factor.

But when it comes to injury prevention, helmets aren’t the only way to keep kids safe. John Lindenmayer, executive director at the Lansing-based League of Michigan Bicyclists, says education is key.

The organization works with policy makers, law enforcement and communities through advocacy and promoting bicycling.

“We don’t, at this point, support a mandatory law for bicycle helmet use,” Lindenmayer says. “Studies show that helmets can become a deterrent for bike riding in general.” While he agrees that helmets are a good choice and encourages them, educating riders and drivers on how to safely coexist on the roads is a big piece of the puzzle.

“You see a decline in the number of actual crashes that occur, and I think it’s because of more self awareness,” Lindenmayer says.

Farmington Hills is the only city in southeast Michigan that boasts a bicycle helmet ordinance.

Anyone less than 16 years of age must wear a helmet when bicycling, skateboarding or rollerblading, according to the ordinance. One warning is issued on the first offense and a $5 fee must be paid on the second offense.

If a person submits proof of the purchase of a helmet to the Farmington Hills Police Department within 10 days of the violation, it will be dismissed.

If you opt to buy a helmet for your child, Teddy suggests following five steps from Safe Kids Huron Valley – position, buckles, side straps, chin straps and final fitting.

Position refers to the helmet sitting level on the head and low on the forehead – one or two finger-widths above the eyebrow.

For buckles, make sure to center the left buckle under the chin. Next, adjust the side straps to form a “V” shape under and slightly in front of the ears. If possible, lock the slider.

Then, buckle the chinstrap and tighten until no more than one or two fingers can fit under it. And for the final fitting, open your mouth and yawn. The helmet should pull down on the head. If it’s rocking forward or back, readjust following the directions.

Finally, roll the rubber band down to the buckle. All four straps have to go through the band and be close to the buckle to prevent slipping. This ensures the proper fit for safe riding for your child.

“Safety should not be negotiable,” Teddy says.

This article was originally published in July 2013 and has been updated.