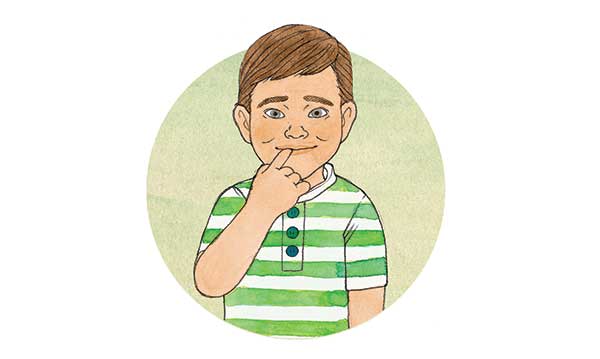 We’ve all been there: Sitting out in public only to look up to a kid, two knuckles deep, digging for a snack. If your rug rat is the one that just can’t get enough of that nose gold – and you can’t get him to stop – look no further. We picked the brain of Brad Judge, a 20-year pediatrician with St. Joseph Mercy Health System in Ann Arbor and father of three, to find out how to get kids to leave the bats in the cave.

The Buzz on boogers. Boogers are mucus in the nose combined with stuff we inhale, Judge explains. Nose picking is a common practice for kids, but the reason they eat what they find isn’t clear. “I’d say a toddler is doing it because it’s there, or it could be there’s some sensation, a tickling or something, that is going on in there,” Judge says. “Why they eat what they find, I don’t have an explanation. It’s a kid thing.”

A dirty dilemma. Kids that pick too much can cause some damage to their nose by bursting blood vessels or damaging the skin. Since the nose is connected to the throat in the same way the mouth is, there are no serious dangers to eating their own boogers. There is, however, a threat to others. “Bacteria in your nose can be harmful to other people,” explains Judge. “If you pick your nose and touch something, or someone, they could get infected.” The real personal problem with nose picking/eating is the social stigma attached to it. (We have explored the conversation about whether eating boogers can help boost kids’ immunity. Read that here.)

Keep their fingers busy. “Give them something to occupy their hands,” Judge says. If you spot young kids picking their noses in the car or in even mindlessly in front of the TV and you give them something to do, they are less likely to take a journey to the nostril. “Usually by school age, it’s hopefully not something that’s happening often,” he says.

Make like a spy, not a miner. Another method the doc suggests is making up a code word, like “orange juice” or “pickle,” to let the child know he has his finger in his nose. “(Kids) kind of think they’re invisible, and they don’t think people will see them,” he says. “Using a code word brings it to their own attention and (helps them) stop.”

Avoid picking punishments. When all else fails, keep the problem on the down low. Judge says that as a child learns social manners, the nose picking will often go away on its own. “Don’t make it a big deal, and don’t slap their hands,” he says. “Tell them, ‘Don’t pick your nose in public’ and hand them a Kleenex.” Sometimes, inconveniencing children by making them blow their noses and wash their hands every time will help them stop, too.

Seek medical attention. Another reason kids might be digging is because they have allergies or produce too much mucus. While nose picking is a completely normal behavior, if you think your child is doing it more than other kids, Judge suggests taking your concerns to your pediatrician.

When done correctly, body and facial piercings can enhance one's sense of self, but is it safe and what should parents know if their teen wants one? A local artist weighs in.
Read more
Sponsored Content

Easing Back-to-School Anxiety in Your Child With Autism