Should You Buy Your Kid a Laptop for Christmas?

Did a laptop land on your kid's holiday wish list? Two metro Detroit computer experts share parent-geared tips if you want to buy your kid a laptop. 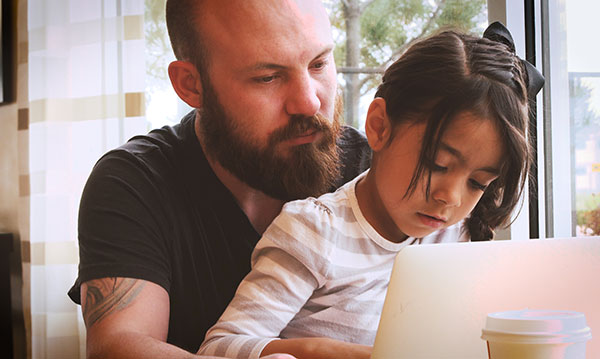 If your kids are hoping to find a laptop under the Christmas tree this year, you’re not the only parent pondering whether to buy your kid a laptop this season.

Computers, cell phones and high-tech toys rank high on kids’ holiday wish lists these days. But despite the convenience of a portable computer for your child’s homework or gaming needs, it’s a big investment.

Are your kids ready for the responsibility and if they are, how can you choose the best laptop for kids without breaking the bank?

We asked two computer experts here in Oakland County, Michigan for some advice on the topic of whether to buy your kid a laptop. Here’s what they had to say.

You get what you pay for

First, consider price points and longevity. Some new laptops can be purchased for around $200 or less, making these models especially popular for kids.

“Generally in that price range, you would find a worse-off build quality; they’re a little cheaper, not as well-built,” he says.

Do your research on brands – and read plenty of reviews – before making a snap decision in the store.

If you buy your kid a laptop, a refurbished option could help you afford a better model that might have otherwise been out of reach. Plus, your kids won’t even know it wasn’t brand new.

“I’m all about refurbished, especially for first computers for kids,” says Sara Flowers, co-owner of Tecoso, a computer services company based in Ferndale.

Be an observant shopper

While checking out different laptop models, pay attention to which ones seem more sturdy. Signs of a less durable laptop include a thinner frame, flimsy parts and being able to feel or move internal pieces by simply pressing down on the computer.

“That’s gonna be a good indicator that it’s not going to hold up well,” Lint explains, adding that a slightly heavier weight is also a good sign. “The thinner it gets, the more prone it is to breaking.”

Many children use Chromebooks at school, so they may come home asking for this type of laptop for a holiday gift. Just keep in mind that they don’t run a typical operating system.

“A Chromebook is an extremely lightweight laptop and it doesn’t run on Windows or Mac OS. Instead it runs a browser – Google Chrome – to access applications on the internet,” Lint explains. “A Chromebook takes great advantage of utilizing the cloud to do what a normal computer would do locally.”

So you won’t be able to install programs like Microsoft Word or a game like Minecraft, and your storage capacity will be limited, Flowers adds.

“It’s totally different and, if you’re not used to it, it’s hard to navigate and it’s not as compatible,” she says. “Everything is web-based.”

Some parents consider a tablet instead of a laptop. While tablets have their merits, they’re most likely less functional for kids’ needs long-term, Lint says.

“What you can do on an iPad is always growing; however, it is limited in the sense that it can only do certain things,” he says. “With a computer, the possibilities are limitless and you can utilize a lot more power with a laptop.”

Lenovo is a good brand to start with for a durable laptop, Flowers and Lint recommend.

“They’ll hold up to whatever your kid can throw at it. They’re powerful machines,” Lint says.

Consider processing speeds and available memory when shopping, Flowers notes – it’s important even for a child’s laptop, especially when running games like Minecraft.

“It does take a lot to run that platform or that game. It’s a lot of processing and memory,” she says.

Touchscreens are increasingly popular but can also be prone to problems. “I don’t recommend touch screens, especially for kids,” Flowers says.

Mac computers are another good option, though they tend to be more expensive, she says. “I think for a first computer, especially a first laptop, I think a PC is the way to go.”

Whether kids are using their own laptop or a shared computer, be prepared to put in place parental controls and security measures. Also, teach your kids about not clicking offers and accidentally downloading dangerous viruses.

“A fairly common mistake is clicking on things that would appear beneficial or fun when in reality they’re downloading malicious software like a virus or adware, or just plain junk,” Lint says. “It would be the most beneficial to your child to teach them about internet safety.”

Flowers agrees that safety is the most important consideration: “That’s my biggest piece of advice to parents, to make sure you know what your kids are doing online and make sure you have security measures in place,” she says. “That should be a top priority when you get a laptop.”

To avoid frustration, make sure your wireless connection is functioning properly when setting up a new computer in your home, Lint says.