When it comes to concentration and little kids, it can be tricky to tell what's typical and what's not. Learn some of the hallmarks and how to nurture focus. 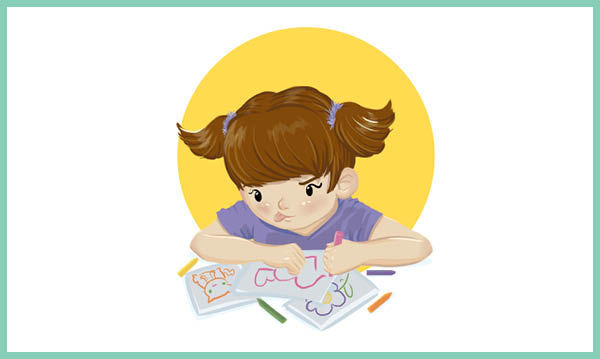 Does your young child have trouble focusing? By age 4 or 5, kids are at a bit of a crossroads. On one hand, they’re a “dynamo of energy, drive, bossiness (and) belligerence,” as American Academy of Pediatrics puts it. But take heart: Around kindergarten time, they’re also ramping up their attention spans.

“Kids begin developing concentration from birth,” says Dr. Dana Cohen, a child psychologist with Beaumont Royal Oak. “We expect it to get better over time as kids age.”

“The general rule is three to five minutes of attention for every year of age,” Cohen says. For a 4-year-old, that’s 12-20 minutes – and about 15-25 for age 5. This doesn’t count TV or iPads, she notes. And, Cohen cautions, numbers vary. “It’s developmental, and there’s a wide range for what’s considered ‘normal.'”

Concentration is an important “executive brain function,” notes Dr. Arthur Robin, director of psychology training at Children’s Hospital of Michigan https://www.childrensdmc.org/ in Detroit, that helps us keep attuned to a task and resist distractions. “Executive brain functions are like the conductor of the orchestra. If the conductor does a good job, the music sounds great.”

For parents, striking up that symphony is simple. “You can try to stretch their attention span with almost anything that interests them,” Cohen says – like naming pictures in a book, coloring or playing with Legos.

“Start with games,” Robin suggests. “Play with the child for as long as the child can do it before they start getting bored.”

Dividing one big boring task into smaller tasks can help kids stay on track, too. Both doctors agree electronics are not helpful and may even cause distraction. Ensuring good rest and outlets for energy helps too, Cohen says – plus consistent discipline and even keeping your house organized.

Both doctors recommend rewarding attention with praise. Take a game of “beat the clock,” for instance, where kids have a certain amount of time to finish a task before the clock runs out. “Tell your child to clean up toys and see how long it takes them. Praise them as their time improves daily,” says Robin.

Or you can simply say, “I like how you’re sitting quietly!” Cohen says. Getting frustrated and yelling is also a distraction; kids won’t concentrate when you’re upset with them.

“Attention isn’t usually something we get concerned about until at least age 4,” Cohen says – and even then, with caution. If your 4- or 5-year-old is easily distracted or can’t focus on a single activity for more than five minutes, the AAP notes, check with your pediatrician. “Be vigilant,” says Robin, especially if you suspect some level of attention deficient hyperactivity disorder.