Klutz in the kitchen? Never fear! Our savvy foodie mom breaks down the bare bones basics on cooking for absolute beginners. 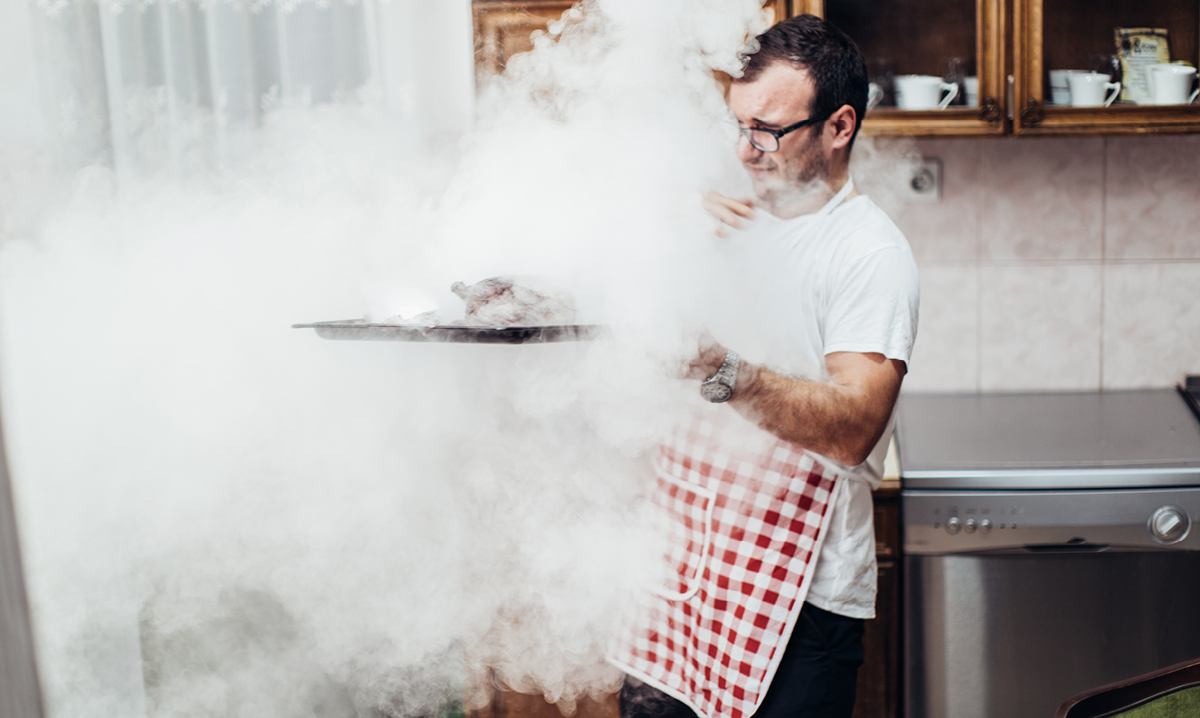 Cooking can be … well, scary. With all of the cooking shows on The Food Network and celebrity chefs like Bobby Flay offering endless yummy recipes, you’d think we’d all be busy in the kitchen whipping up gourmet meals like lobster ravioli and bananas foster.

But the truth is that many recipes – even the fancy ones! – are all about building on simple cooking techniques to create one amazing meal.

For more kitchen know-how here are some tips on the cooking tips for absolute beginners – from veggie prep and egg scrambling to boiling pasta and sauteing meat.

One of the easiest meals to make is pasta. To make perfect pasta every time, fill a large pot two-thirds of the way with water. The more water you have, the less likely the pasta will stick to the pan while cooking. Add one teaspoon of salt to the water for every gallon of water you have.

Turn the stovetop heat to high, and place the filled pan on the burner. Let the water come to a boil before adding the pasta. Boiling water will have lots of bubbles on top and, when you stir the water, the bubbles won’t go away. That’s how you know it’s time to put in the pasta – add one pound pasta (usually 1 box) to the boiling water and cook for about 8-12 minutes.

Stir and check the pasta as it cooks. Using a slotted spoon, remove one of the pasta pieces at eight minutes for a taste test. You should cook the pasta until it’s “al dente,” meaning the outside is still firm when you bite into it, but the inside is slightly soft and chewy. When the pasta is done, put a colander in the sink and pour out the pasta and the water.

It’s time to break out the knives! Place a large cutting board on a sturdy surface. Wash and dry the vegetables you will be chopping, like carrots or celery. Your non-dominant hand will hold the vegetable while your dominant hand (for me, my right) holds the knife.

Note: For hard vegetables, you want to use a knife with a clean edge – not a serrated one (the blade looks like it has teeth). Serrated knives usually are not as sharp and are better for breads.

Place the vegetable – let’s say a carrot – onto the cutting board and position your fingers so that they’re curved, with your nails touching the vegetable and holding it in place. What you’re trying to avoid here is having your fingers flat against the vegetable: If the knife were to slip, your fingers would be right where the blade would be.

With your dominant hand, grip the knife with your index finger on the top, non-blade side, thumb on one side of the handle and middle, ring and pinky fingers on the other. Slice into the vegetable using a downward motion (so the knife doesn’t slice going down flat, but at a slight angle).

Remember to use your non-dominant hand to move the vegetable into place for cutting. Do not use the knife to reposition the vegetables.

Tip: For chopped vegetables in a flash, buy them in bags in the freezer section of your grocery store or visit the salad bar to get what you need.

Sauteing meat is fast and turns out moist, delicious entrees. Become a saute master by first picking the right pan – use a large, wide-rimmed, heavy bottomed one.

Non-stick pans don’t work as well for sauteing meat! Put the saute pan on a stovetop burner and turn the heat to medium-high. Let the pan warm up, testing the heat by putting your hand two inches from the surface: When it’s heated, you should only be able to keep your hand there for a moment (do NOT touch the pan’s surface).

Add enough oil (olive, canola or vegetable) to lightly coat the bottom of the pan. Allow the oil to heat for about a minute before adding the meat.

Pat the meat dry before adding it to the pan – the less moisture on the outside, the better chance that you’ll have a crisp crust on the outside. Place the meat in the heated oil, being careful not to crowd the pan, which steams the meat and makes it soggy.

Cook the meat on the first side until you begin to see it browning around the edges; then, flip the meat to the other side and repeat the process. Be careful not to overcook or undercook the meat.

Tip: After removing the meat from the pan, add chicken broth or white wine to create a sauce. Use a metal spatula to remove any stuck-on bits from the pan’s surface. These bits will give the sauce flavor and thickness.

Fluffy, light scrambled eggs make for a great breakfast, lunch or dinner. Here’s the secret: It’s all about the right pan and mixing the eggs just-so before cooking. For the eggs: Crack them and put the yolk and white into a large mixing bowl. You can use a whisk to blend the eggs by hand or a mixer.

The point with whisking or blending is to incorporate air (“fluffiness”) into the eggs. You don’t want to overdo it, especially if you’re using a hand mixer. But 20-30 seconds of blending should give you a pale, yellow egg mixture (about two minutes with a hand whisk). Some people add milk to their eggs for extra creaminess. I’d suggest a scant teaspoon per egg if you’d like them lighter.

Use a non-stick pan on a stovetop and turn the burner medium-high heat. Place a generous piece of butter (about one tablespoon for six eggs) and let it melt in the pan. Add the egg mixture. As soon as the eggs appear to have “set” – in other words, they no longer look runny – push the eggs around in the pan using a plastic spatula to break them apart as they cook.

Tip: Remove the eggs from the pan as soon as they appear to be done. If you cook eggs too long, they can get dry.

Stir-fries are a super-fast healthy way to make a meal. The key with a stir-fry is having all of your ingredients ready to go before you start and then cooking them quickly at a high heat. Many stir-fry recipes call for you to use a wok, but you can also use any wide-bottomed, non-stick pan.

Cut up your meat and vegetables into bite-sized pieces. Make sure to rinse and thoroughly clean any knives, cutting boards or other kitchen equipment you use for prepping the raw meat. Add two tablespoons vegetable or canola oil to the pan (olive oil has too much flavor for stir fries). Allow the oil to come to medium-high heat; you can toss a breadcrumb into the pan and if it begins to sizzle, you’re ready!

Tip: For a quick sauce, place a half-tablespoon of cornstarch into two tablespoons water, along with two to three tablespoons of soy sauce in a cup. Stir until the cornstarch is dissolved. Pour into the pan during the final minutes of cooking (once the meat and vegetables are done) and allow it to come just to a boil (bubbles); then remove from the pan, stir and serve.

A Crock-Pot is a kitchen klutz’s best friend. The beauty of using a slow cooker is that you can throw all of the ingredients into the pot in the morning and come home to a perfectly cooked meal at night.

The problem with Crock-Pots is that the slow cooking tends to seep all of the flavor out of whatever you put into it, like meats – and if you cook it too long, the meat becomes downright mushy.

Avoid both Crock-Pot pitfalls by adding plenty of flavor to the meat you’re cooking and by using the low setting, instead of high. One of my favorite easy slow cooker meals is putting four frozen chicken breasts into the slow cooker, along with one jar of tomato pasta sauce. Cook on low for five to six hours and then serve over spaghetti.

Tip: Coat the inside of the Crock-Pot bowl with cooking spray for easy cleanup.

Next time, get your kids involved in the fun! You can start teaching them basic cooking skills, too, based on their age. Here’s a complete guide, broken down by age group, to help you teach your kids the basics of the kitchen – whether they’re preschoolers or tweens.