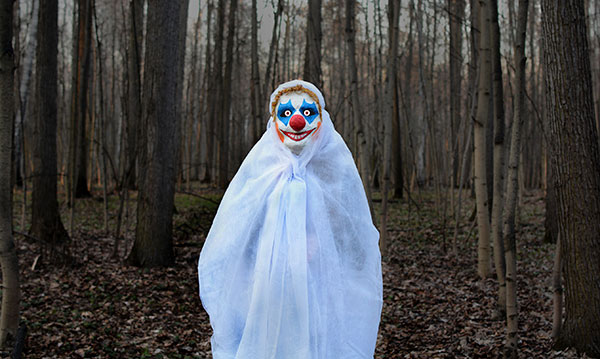 Everyone’s childhood nightmares about clowns are being realized this October (no offense to the friendly clowns out there!). Local news outlets are reporting creepy clown sightings all around metro Detroit, with a new report cropping up what seems like daily.

What is the deal with people dressed as clowns lurking around schools, in the woods and around neighborhoods? It all seems to have started in South Carolina, and now, MLive reports clowns have been spotted in at least 20 Michigan cities, many here in southeast Michigan.

In Troy, a clown was spotted at dismissal around Athens High School, which is also near a middle and an elementary school, Sept. 30 and Oct. 3, confirms Sgt. Meghan Lehman, public information officer at Troy Police Department. A clown was caught hanging out behind an ice cream shop in Lake Orion, and one was even waving to people in the dark in Clinton Township.

As for why this disturbing trend has caught on, Lehman can only guess it has something to do with the spooky season. “I guess with Halloween coming up – and Halloween apparently gets more and more popular every year – people are just trying to get into the Halloween spirit.”

Many of these incidents are super freaking creepy, but seemingly harmless.

“I think it’s important to know that most of these people are probably just out to have fun but you should trust your instincts just like you do with any stranger,” Lehman advises.

It’s always good to stay alert – especially since there have been some not-so-innocent reports, like two out of Sterling Heights. In these cases, a person dressed as a clown assaulted a child, and three people dressed as clowns carrying baseball bats scared two women.

Typical “stranger danger” tips apply to these types of situations.

“Nobody should be following you, touching you, getting in your way,” she says. “The advice we give kids is if they see one of these people around, they can report it to an adult. Most likely, they’re not up to anything wrong, but you never know.”

If a clown were to do something more serious, say follow, threaten, grab or assault a child, those would be grounds to call 911 as soon as possible. “The sooner we know, the sooner we can get out and the more likely it is that we would apprehend this person and stop an incident like this from happening again,” Lehman says.

Try to recall any details about the clown’s outfit, vehicle or any other pertinent details.

A warning to clowns

For teens interested in “clowning around,” Lehman offers a serious warning: “There are really safety concerns for these kids dressing up as clowns. People will be quick to defend themselves.”

The Troy Police Department posted a warning to clowns on its Facebook page explaining while they support Halloween fun, “Clowns that break the law, including trespassing and threatening people, are subject to arrest just like anybody else. If you decide to dress up as a clown and go out in public, you should do so with great care and consideration as those you are targeting may feel the need to defend themselves.”

Some commenters have expressed concern, noting if a clown chased somebody with a gun or a concealed pistol license, they may react by shooting in self-defense.

“That’s really more of our concern,” Lehman says, urging parents of teens and older kids to consider passing along such warnings. “That would be something more likely to happen.”